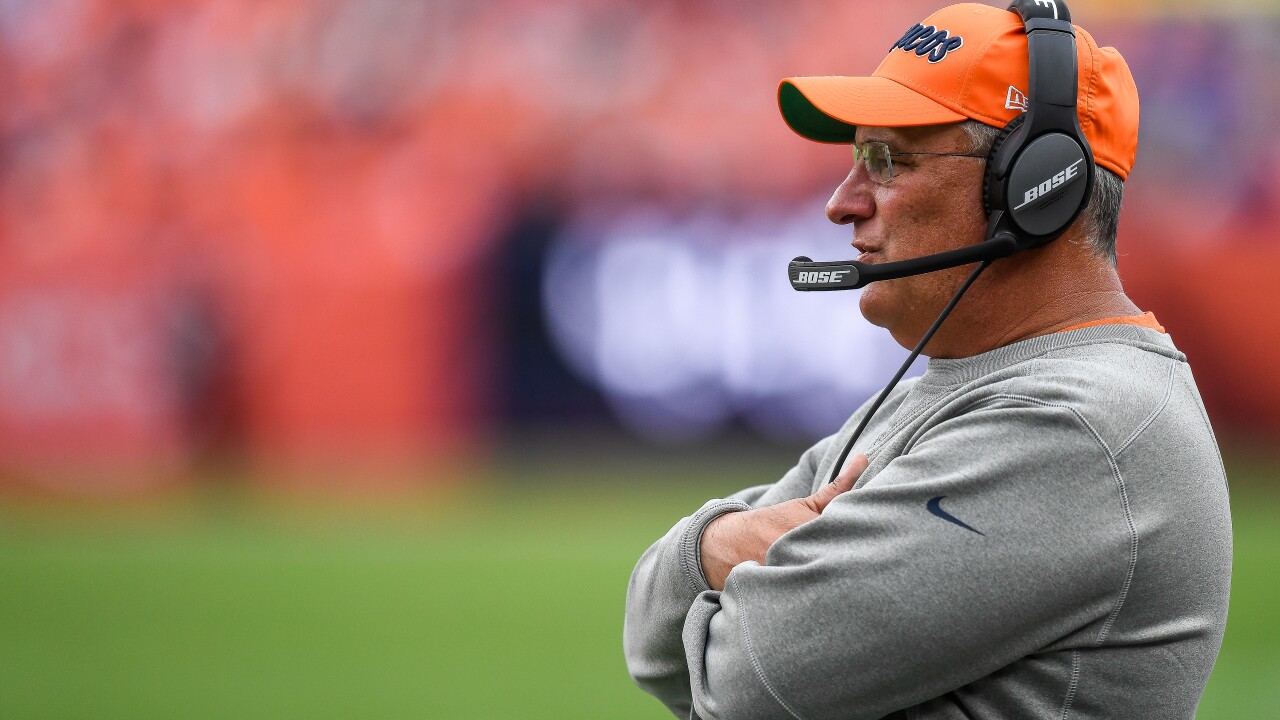 ENGLEWOOD — Vic Fangio looked the same, but sounded different Monday. It was expected. The Broncos suffered one of their most cheese-grater-on-shins regular season losses in recent memory. It was now 22 hours later, and the defeat stung, leaving Denver 0-2 for the first time since 1999. The Broncos did enough to lose, but this win seemed secure if not for some questionable calls over the final 31 seconds.

Bradley Chubb's roughing the passer penalty and the officials granting a second for Eddy Money, as Eddy Pineiro was dubbed in Chicago, to nail a game-winning field goal created pangs in Fangio's side as he attempted to move forward.

"In regards to the officiating, I'm going to quote (New Orleans Saints coach) Sean Payton — 'We can't control poor officiating or awful calls.' ... We still have to find a way to win the game," Fangio said.

But Monday afternoon left him with questions, feeling a bit helpless after a 16-14 loss that featured head-spinning lead changes. The flag on Chubb irked Fangio.

As I have said on social media, the NFL is putting defenders in an awful position as it goes to comical lengths to protect quarterbacks. The league wants the defender not to put the majority of his weight on the quarterback's body when taking him to the ground. I asked the officials about this a year ago during their annual rules presentation and was told how the alligator roll was the proper technique. Yeah, like these guys are Jack Hanna. It would take Matrix body-bend to alter the physics of a 280-pound player going into a quarterback without landing on him.

That said, Fangio said the call on Chubb was not letter of the law. It was wrong.

It led to a 15-yard gain, exposing a Broncos team with no margin for error. Finally, given time to rush Mitch Trubisky -- most of his throws were released in under two seconds until the last drive -- the Broncos failed. Throw in a blown coverage on the last play, and it led to a crippling defeat. Fangio acknowledged the mistakes. The Broncos posted 27 first downs and managed 14 points. They haven yet to register a sack or takeaway. However, a victory felt like it was taken away after the clock hit zero.

Fangio was not buying that there was time remaining after the reception.

"I don't think there was. They're assuming a lot there," Fangio said. "He went down with one second and nothing in life happens simultaneously, there's lag time there."

In the end, the Broncos fell and were left to face sobering questions heading into a road matchup with undefeated Green Bay. Paramount is what to do with left tackle Garett Bolles. He was called for holding four times in the loss, leaving him with 26 through 34 career games. Fangio said Bolles must improve his technique, take the teaching and understand how his finishing of plays, even in the run game, is creating issues. I asked Fangio about benching Bolles even for a series for Jake Rodgers to send a message and let him clear his head.

"With our depth the way it is at this point, that's probably not an option," Fangio explained.

And what about moving Dalton Risner to right tackle and Elijah Wilkinson to left?

"That could be a possible move but that's one of the reasons we brought up Rodgers, so we wouldn't have to make that move," said Fangio, adding it's possible Denver adds a lineman for depth this week.

Two games don't ruin a season. But teams that lose their first two games see their playoff chances dip to roughly 13 percent. The Broncos, who will get linebacker Todd Davis back this week and possibly cornerback Bryce Callahan, cannot think of the postseason. They need a micro goal of getting this season off the ground, and the ship heading back toward the lighthouse. The Broncos are 11-23 the past two seasons and own the league's longest active losing streak at six.

"There was a lot of good out there yesterday on both sides of the ball," Fangio said. "But just not enough”