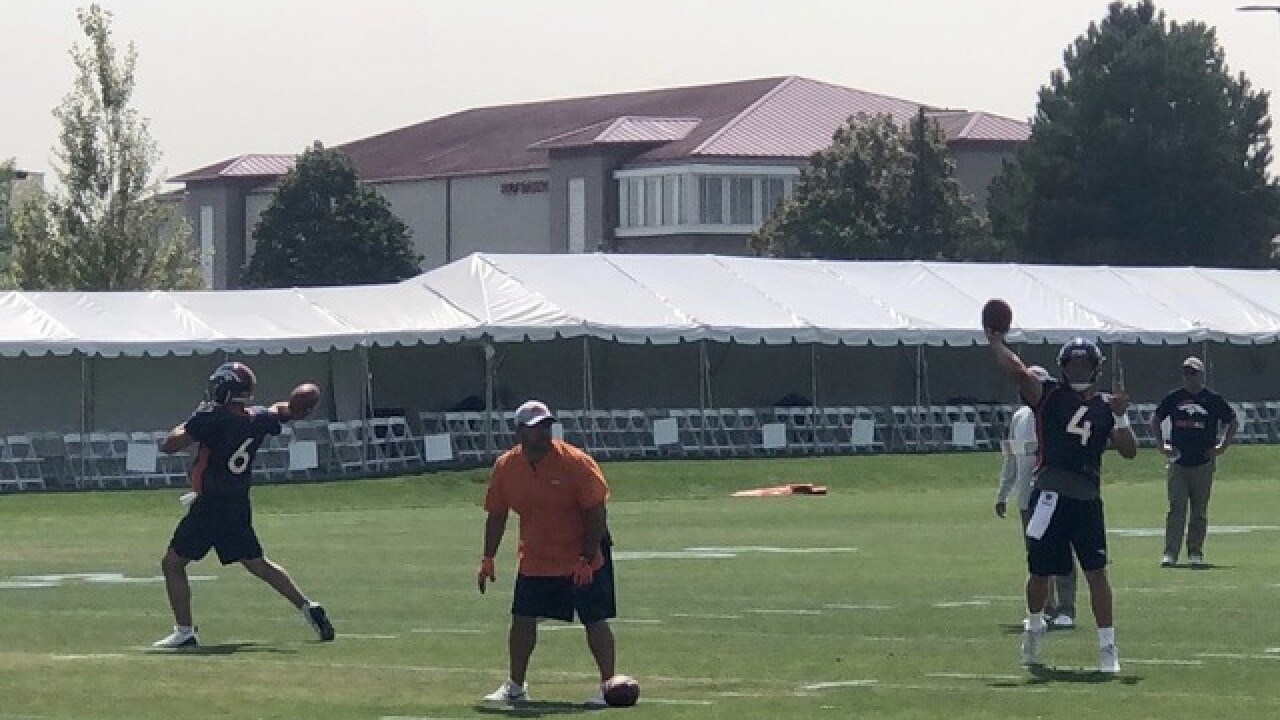 ENGLEWOOD, Colo. -- The days of The Decision were supposed to go the way of flip phones and dial-up connections.

For the third consecutive season, the Broncos feature drama at quarterback. This time it involves the backups. Following his strong preseason debut, Chad Kelly received reps with the second team Monday with Paxton Lynch working with the third-stringers.

Broncos coach Vance Joseph confirmed the decision to promote Kelly to the second team at a Monday afternoon press conference.

"Chad's played well. He played well in the scrimmage; he played well Saturday night, so he deserves a chance to be the [No.] 2 right now," Joseph said.

He said Lynch was "disappointed" but that Lynch understood he needed to perform better. Joseph said the roster movement was more about Kelly's play that anything else.

"I wouldn't have gotten there without my teammates. Those guys got me in the right protections," said Kelly who talked with his uncle Jim Kelly about his outing, and was told to stay humble. "The guys with the ball in their hands made plays. It was other guys around there that helped me get there."

In his first game in nearly two years because of wrist and knee injuries, Kelly completed 14 of 21 passes for 177 yards, two touchdowns and one interception. He brought the restless home crowd to life with his attitude and performance. He produced more first downs in his initial drive than starter Case Keenum and Lynch combined.

For Lynch, Saturday night could not have gone worse. He lost grasp of his backup job, and was thoroughly outplayed by former Broncos Trevor Siemian and Kyle Sloter, now reserves for the Vikings. The decision to demote Lynch casts doubt about his future. The Broncos held onto the belief this offseason that in year three Lynch would take significant steps forward given his experience and improved health. It can be argued that he has regressed, and he has failed to show the type of leadership desired at the position.

Taken in the first round of the 2016 draft, Lynch is 1-3 as a starter, winning at Jacksonville two years ago. The Broncos are expected to explore a trade market for him, but it will be hard to find takers given his contract. He signed a four-year, $9.4 million deal after he was selected out of the University of Memphis, and carries $4.4 million in dead cap money if cut. However, at this point, the money could become secondary to his lacking performance.

As for Kelly, the former Ole Miss star said Saturday he's not focused on the crowd reaction -- Kelly! chants rang throughout the stadium -- or his success. He left plays on the field, and knows he needs to continue to improve.

"I have to make sure I keep my nose in the playbook and keep studying. I should have studied more on the main zone reads otherwise I wouldn’t have thrown a pick. We go out there and learn each and every day, each and every practice, each and every snap," Kelly said. "The game’s over. We look to the Chicago Bears and getting better."

But what about securing the backup job? Can Kelly show enough over the next three weeks to convince the team not to land a veteran like Matt Moore or T.J Yates.

"I have to keep learning. Guys who have been in this league don't know everything," Kelly said with a smirk. "And this is my second year, so I don't know anything."