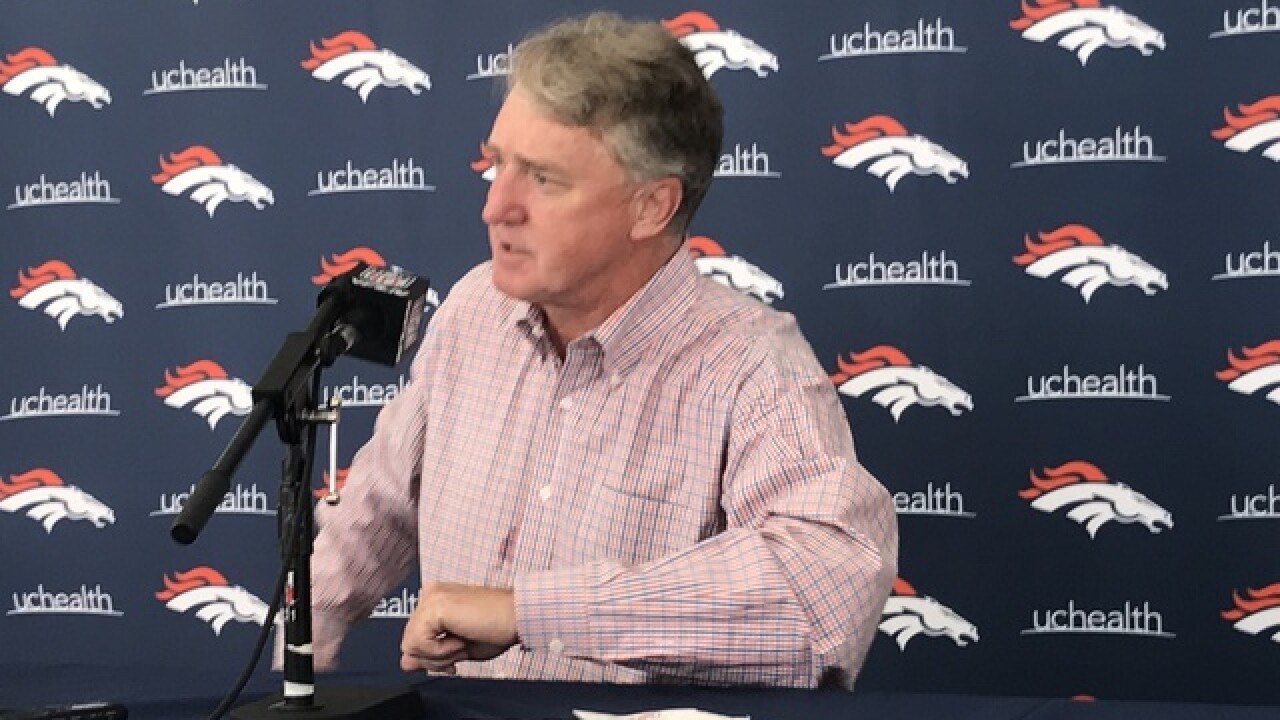 CENTENNIAL, Colo. -- On the eve of the Broncos taking the field for training camp, an off-field issue continued to dominate the conversation surrounding the team.

Friday, CEO Joe Ellis fielded a battery questions about the Pat Bowlen Trust, which was put in place as Bowlen's health declined with Alzheimer's in 2014. The Trust has final say in determining which of Bowlen's seven children becomes his successor. However, if no one is deemed qualified based on the criteria established by Pat Bowlen, the team could be put up for sale. The battle for ownership became public this summer as Beth Bowlen Wallace expressed interest in becoming controlling owner, despite receiving a vote of no-confidence from the Trust. Ellis said Friday Brittany Bowlen, 28, has expressed interest in owning the team, but her age suggests a grooming process would be involved.

Ellis looked tired Friday, prompting questions about how long he wanted to continue in his role.

"I want to see this through for Pat. He's done a lot for me and my family," said Ellis, who was extended multiple years in his current position. "He asked me to do something. It's important to him. I am accountable to him for that."

Ellis said he does not believe anything will change regarding the NFL's confidence with the succession plan after the public drama this summer. He insisted he has “received a lot of calls of support” from other NFL owners about the Broncos "being led by the Trust."

Ellis praised Brittany Bowlen's path to the ownership as she gains experience at a nationally-known consulting company following schooling at Notre Dame and Duke. He failed to address Wallace's candidacy, saying he stood by past statements by the Trust that said she was "not capable or qualified at this time."

While Ellis and the Trust continue to "make every effort" to identify a Bowlen child to take over the team, Ellis was asked if selling the Broncos was a possibility.

"Not really. Pat said if no child was qualified, then you should sell the team," Ellis said. "But he would want us to make every effort to see if a child is capable, has the ability and has earned the to sit in his chair."

Broncos general manager John Elway avoided the ownership issue until this offseason. Following Wallace's public call to take over, Elway tweeted in June, showing strong support for the succession plan. Elway weighed in again on Friday, admitting he has "zero heartburn when it comes down to what's going on with ownership."

"I have no worries. It's not going to affect our football team. That will get handled," Elway said. "Mr. Bowlen put a plan in place and wanted the trust to execute it. I have total confidence in the fact that it's going to happen the way Mr. B wanted it to happen. The people on the Trust know Mr. Bowlen very well and what he wanted. (The Trust) is always going to put the football team first because that's what he wanted. I am just telling you I don't worry about ownership at all."

Regarding stadium rights, the other off-field issue, the Broncos adopted a placeholder name after removing Sports Authority signage this summer. Ellis continues to exercise patience as the Broncos search for a longterm fit. He refused to place on a timetable on finding a new sponsor. The venue is currently called Broncos Stadium at Mile High.

"It's like groundhog day. But it's very important we get the right partner and very important that we do it for the longterm viability," Ellis said. "We have to sustain and keep the stadium modernized. And the funding from that is a part of it. It's taken a bit longer. It sounds kind of quirky, I understand. But the longer it takes, the more patient I've become."