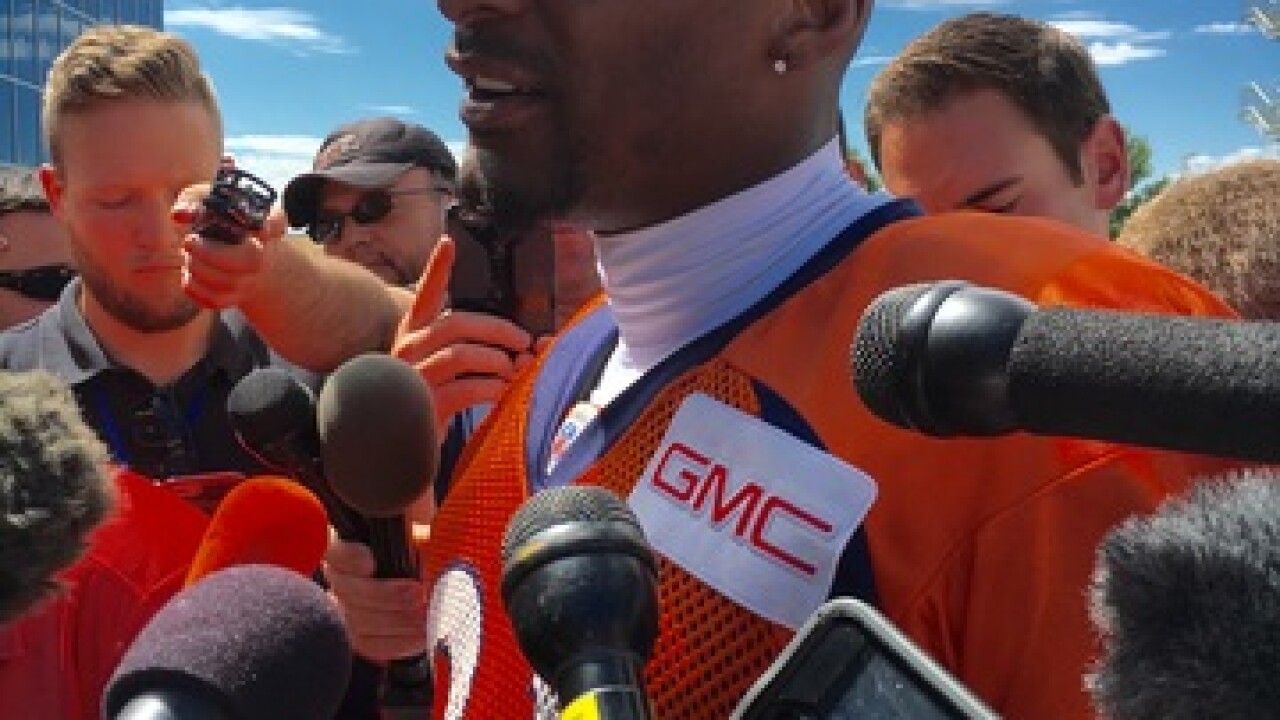 CENTENNIAL, Colo. -- The Broncos practice went from acoustic to electric on Monday.

Cornerback Aqib Talib, a live wire who brings swagger to the defense, practiced for the first time since suffering a gunshot wound in his lower right leg on June 5. Working out with the team was the first step in an uncertain process. Talib said his leg, which required crutches for several weeks, has healed. However, his situation remains unresolved. The Dallas Police Department and NFL continue to investigate the incident which left Talib injured. Talib told the Dallas PD, according to multiple reports, that he didn't know how he was shot. The involvement of a firearm and Talib's previous run-ins with the law leave him a candidate to be suspended by the league.

The Broncos are proceeding as if Talib will be able to play in the season opener with an eye on getting him reps in the third preseason game against the Los Angeles Rams. Talib declined to discuss the June 5 incident when asked directly if he shot himself.

"The situation is still under review and we have to respect that process," Talib said. "I am not going to talk about that right now."

Talib's presence changes the defense. Teammates feed off his intensity, even in practice. He admitted he feels responsibility to "get the energy up," something impossible while watching Bradley Roby and Kayvon Webster receive extra reps in his absence.

"To sit on that sideline and being away from football, you see how important it is to you," Talib said. "You definitely learn to love the game a little bit more."

Defensive coordinator Wade Phillips was impressed with Talib. It was one day, but a step in the right direction, said Phillips, echoing coach Gary Kubiak's comments.

"He looked really good. We are going to ease him back in," Phillips told Denver7. "But he looked good."

Talib participated in multiple drills, but was on a play count. He made his reps count, reuniting the "No Fly Zone" for the first time since in training camp.

"He's moving around and has a lot of confidence," safety Darian Stewart said. "No strings. He makes it a lot more fun out there. He's always the one to crack a joke or something. Or make sure everyone's mind is right."