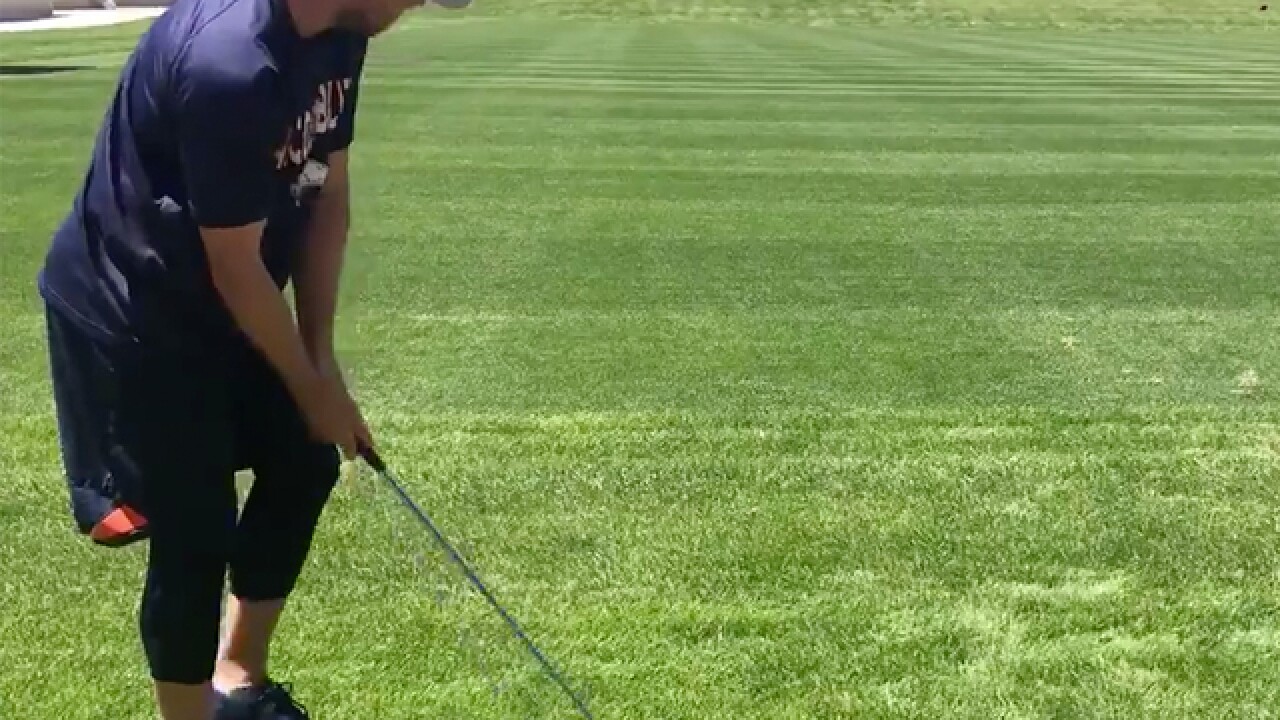 Copyright 2018 Scripps Media, Inc. All rights reserved. This material may not be published, broadcast, rewritten, or redistributed.
<p>The golf bug infected Case Keenum long ago. After a lifting session, he walked over to the far east corner of the Dove Valley practice field and made quick conversation.</p>

CENTENNIAL, Colo. -- The golf bug infected Case Keenum long ago. After a lifting session, he walked over to the far east corner of the Dove Valley practice field and made quick conversation.

He introduced himself to Kenny Perry. He knew Perry at a glance before Perry recognized him.

With that, Keenum picked up a pitching wedge and walked into his first pressure moment as a Bronco. Let's just say if he can sling it like he swings it, the Broncos' offense should improve significantly.

"He's really good," said McManus, who knows his way around the course as an 8-handicap. "He's the best on the team."

The United States Golf Association arrived at Dove Valley to promote the U.S. Senior Open held June 25-July 1 in Colorado Springs. Broncos general manager John Elway will serve as the honorary chairman and attempt to qualify on May 28 for the event, which Perry has won twice. Elway admitted draft preparations have left him with low expectations, saying he was focusing on "the mental side" of his game.

"He's going to need (tips)," Perry said with a smile. "I have never played with John. I have seen him swing the golf club. He's OK. But the Broadmoor, he's going to have his hands full."

Golf provides a competitive outlet for many athletes. It also lends itself to analogies. And as the Broncos players took their swings -- Heuerman floated a wedge 180 yards off a back retaining wall, befitting a man whose longest drive is 440 yards -- they discussed why 2018 won't be another double bogey.

"I think we are hungrier than ever," said Stewart, one of 17 players remaining from the Super Bowl 50 team. "We added the pieces to help us contend again and win the AFC West. It's about owning up to our responsibilities. (Bradley Chubb) is a great pick. He's going to boost this defense, boost the pass rush, and we are going to be able to make more plays on the ball. I look for us to be in the top 5 of categories again."

Improvement in special teams is needed. And won't be hard. The 2017 season served as a dumpster fire of poorly covered punts and kicks, six muffed punts, and mind-boggling penalties (12 men on the field on a kickoff). Even McManus did not escape unscathed, missing eight field goals after missing a combined 10 kicks the previous two seasons. However, after a slow start, he finished strong, never misfiring on back-to-back kicks or an extra point.

"Obviously I didn't have a great year, and I hold myself accountable," said McManus, who continues to transition well to new holder Marquette King, who is adjusting to working with a right-footed kicker. "We are looking to create a half-court offense and a full-court defense where hopefully the (opponent) has to drive the whole field. One thing is, we have a lot of core guys still here. Defensively, they were still pretty good, and we didn't do a good job of giving them good field position. It's up to the (players left from Super Bowl) to teach the young guys how to get back to that point, to get that swagger back."

Heuerman, whose own career has been marred by injuries and ineffectiveness, now represents the veteran in his position room. He believes he is ready to take a step forward, and admitted the endless quarterback carousel undermined the sputtering offense.

"The biggest difference is having that veteran quarterback presence. How Case leads and manages everything is huge," Heuerman said. "It was definitely challenging (last year). It was like playing golf and not knowing any of the yardage. It was definitely challenging (from week-to-week). We are really excited to work with Case. Knowing he's going to be the guy to take snaps on Week 1, you are able to do a lot with that."