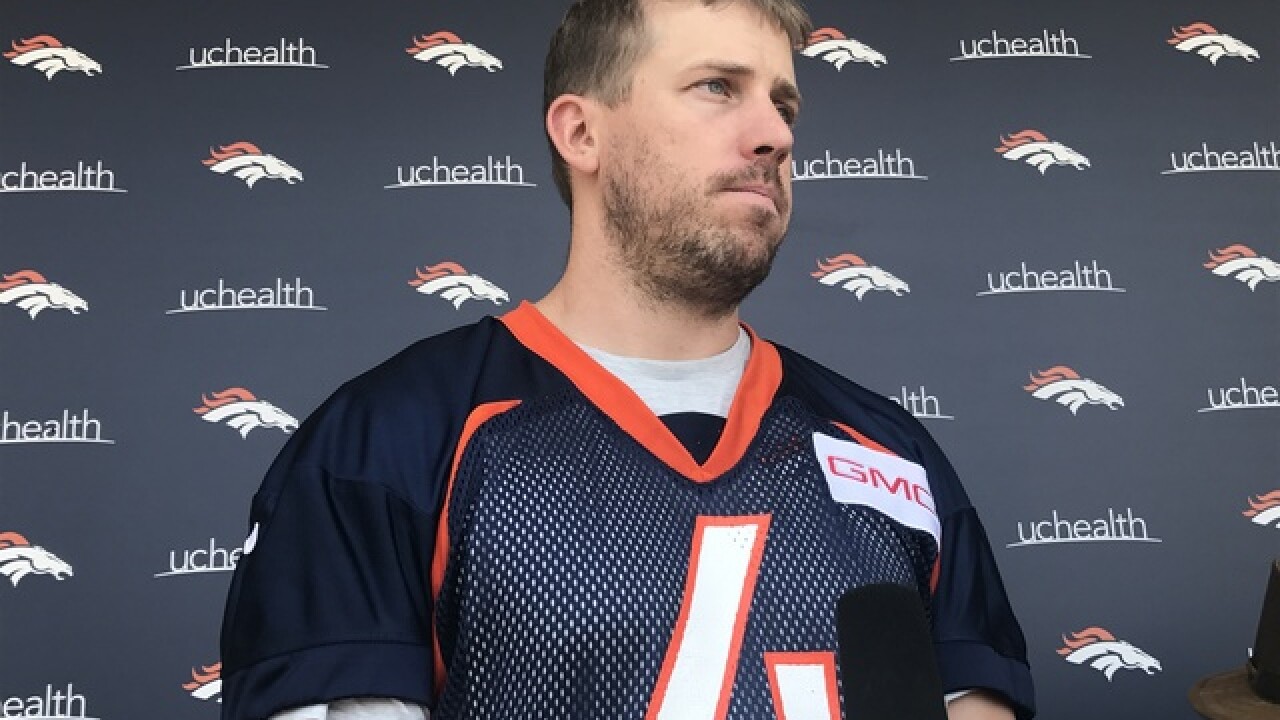 He completed 67.6 percent of his passes, second only to future Hall of Famer Drew Brees. This preseason, he has not approached that number, connecting on 9-of-17 attempts. For Keenum, a more accurate arm begins his feet.

"I thought I was a little unsettled in the pocket at times and caused a few balls to sail when we had a few guys open. Emmanuel (Sanders) got open a few times. Those balls that I said I want them back, looking back, my feet weren’t as good as they normally are in pocket," Keenum said. "Playing quarterback starts with their feet. You wouldn’t think it, but that’s the first thing I tell kids when I’m offering advice. If you’re a young quarterback out there, train your feet and your eyes and your arm will follow.”

Keenum and the first-string offense are expected to play at least the first half at Washington on Friday. It provides an opportunity to build continuity with his receivers. Demaryius Thomas sat out last week with a sore wrist, but practiced Monday. Keenum has worked hard to accelerate the learning curve, and it is reflected in his belief in rookies Courtland Sutton and DaeSean Hamilton.

It didn't hurt that as Keenum spoke the pair stayed after practice to take countless reps.

"I am going to trust them to do their job and run the routes and know their assignments. They’ve done a great job with that. And they’re continuing to get better at that. I think there’s more and more trust being built every day," Keenum said. "I’m watching them right here catching hundreds of balls on the jugs after practice. That’s awesome.”

Keenum benefited from a strong running game in Minnesota. Denver has shown improvement, but needs to take another step. Royce Freeman and Devontae Booker continue to share the starting role. Coach Vance Joseph is comfortable continuing the evaluation. Ideally one of those two emerges as the bell cow with Phillip Lindsay, Booker or De'Angelo Henderson emerging as a potential third-down mismatch in the passing game.

"All four or five of the guys played well again. Right now, it’s an open competition still," Joseph said. "That being said, ‘Book’ and Royce have been our leads guys going into the game, and No. 2 (Lindsay) has been our changeup guy. He’s a package guy, along with De’Angelo and David (Williams) had a nice run in the fourth quarter that would’ve probably sealed the game. It came back on a holding penalty. All of those guys are doing some good things. We’ll see.”

Safety Su'a Cravens worked out Monday but did not practice. He has been sidelined the past two weeks with a sore knee. He's not in danger of being cut. However, Joseph wants to see him in action this preseason. "He’s actually getting better. We’re being smart with him. He had a setback about a week ago, but he’s actually getting better after this weekend," Joseph said. "I would say yes (he needs to play). He’s a guy that joined us in the spring. He hasn’t been with us. The position he plays is the dime backer spot. It’s a critical for us, so absolutely he has to play eventually so we can see what we’ve got in him.”