Broncos Case Keenum misses practice with knee injury, will be ready for Ravens 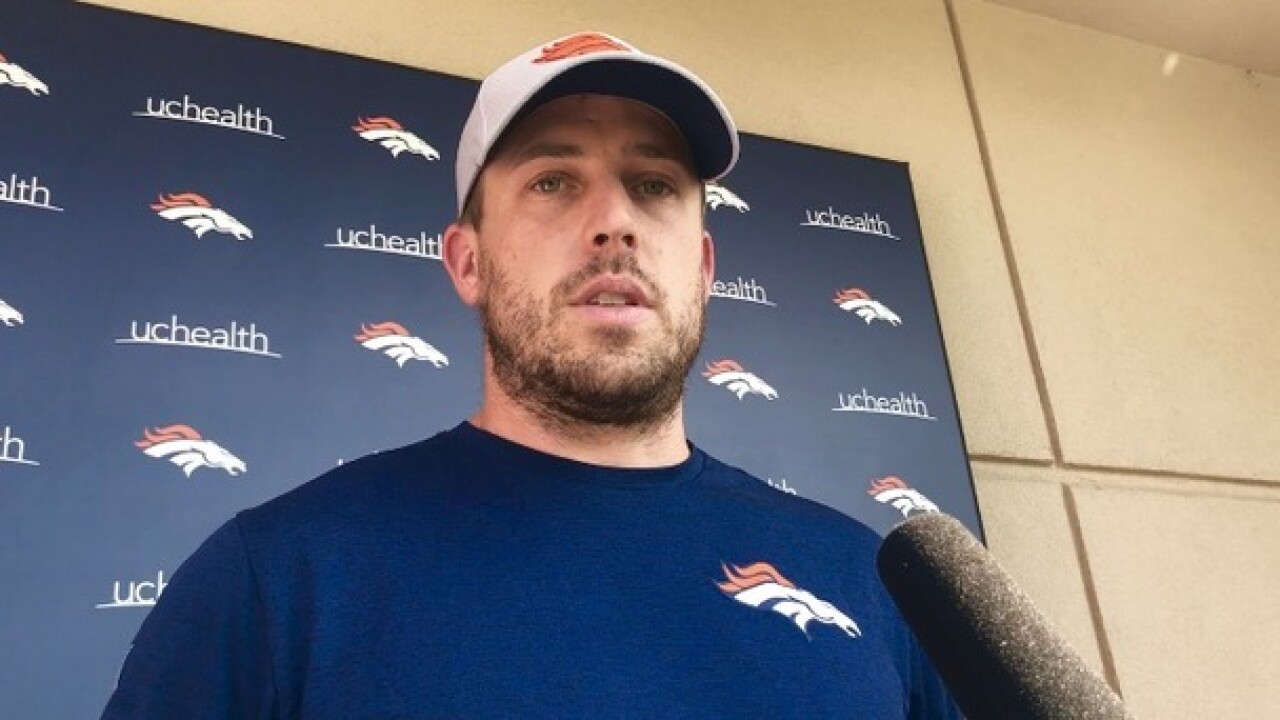 ENGLEWOOD, Colo. -- Of all the molotov cocktails lobbed in the Broncos' direction last season -- unprepared, disorganized -- the most volatile came from general manager John Elway. He called the team "soft" leading into a loss to the Bengals that closed the curtains on playoff hopes. Elway used the adjective to describe a group, if not organization, that had become complacent.

But there was no denying the Broncos lacked an edge, specifically on offense. Case Keenum brings a razor's edge personality to Sundays. When he ran for a first down and a touchdown in the victory over Oakland, he inspired teammates.

"He had two plays were he got hit, and he kept fighting, he kept going," linebacker Shane Ray said. "He kept throwing good balls, finding his guys. It's important you have a quarterback like that, that you know is going to fight to finish and win the game."

It came with a price. Keenum sat out Wednesday's practice with a sore knee. It's not serious, and he will return Thursday. Keenum playing well -- even better than he has the first two weeks -- remains paramount to the Broncos pulling off an upset at Baltimore.

"I woke up and it was sore. I wanted to go. But I took a mental day and will come back (Thursday)," Keenum said. "I guess I need to slide a few times rather than running around and bouncing off defenders. I want to get a first down. I want to score."

Keenum has been better in the clutch than Mr. Goodwrench in the first two weeks, completing 14 of 20 fourth quarter passes for 176 yards, one touchdown, no turnovers, no sacks and a 113.8 rating. He has needed a boost because of his first half missteps -- 65.4 rating, two touchdowns, three picks and one sack.

Offensive coordinator Bill Musgrave admitted Keenum continues to learn the attack. As he digests new wrinkles, in theory, he will have a better feel for throws not to make. Keenum found that sweet spot last season in Minnesota. He leaned on the running game, something the Broncos, too, possess through two weeks. They rank fourth in carries (30) and yards per attempt (5.23), and second in yards per game (157), fueled by the caffeinated rookie Phillip Lindsay.

"We are better at the offensive line spot this year. We are really well-coached," Joseph said. "Garett (Bolles) is better in his second year. Leary is healthy, and playing good. Matt Paradis has come back from those hip surgeries. Last year he had a slow start. He's healthy. McGovern is playing good football and having Jared (Veldheer) her is a Godsend."

If the Broncos stay potent on the ground, Keenum should be able to protect the ball, and rely on uptempo and play action when needed. Keenum has proven he can make good decisions with the increased pace.

Last season, Keenum starred on the road. In his past six starts in visiting parks, Keenum owns 1,520 passing yards (253.3 per game) with 13 touchdowns and five picks. He threw only six road interceptions, and opponents sacked him 16 times.

Compare that to the Broncos' cringe-worthy, road performances last season: six touchdowns, 14 interceptions and 28 sacks. Is it any wonder, they went 1-7 on the road?

Keenum enters this game armed with weapons and balance. He also faces a Baltimore team that is difficult to beat at home. The Ravens have long forged an identity around a punishing defense and effective pass rush. Even at 35, Terrell Suggs demands attention, and the challenge to thwart him could become more difficult if Veldheer is unavailable. He missed Wednesday's practice as he remains in the concussion protocol. However, he watched the end of practice, an indication that he's more likely to play Sunday. If Veldheer is out. Billy Turner starts. He played effectively in relief against the Raiders, logging 35 snaps. However, no one is going to confuse the Raiders' rush with Baltimore's.

Sunday represents the type of game the Broncos could not win a year ago. The season started to turn sour with a loss at Buffalo in Week 3, a winnable game overshadowed by the anthem protest and horrible interceptions.

For Keenum, this represents the next step.

“The thing that’s really encouraging is the grit this team has. They’re competitive and keep battling even when things aren’t going their way," general manager John Elway said on 760 AM. "If you have that, you’ll always have a chance to win football games.”

And it starts with the quarterback.

Cornerback Adam Jones, who missed snaps Sunday with tight hamstrings, did not practice. There's no guarantee he plays Sunday. If he doesn't rookie Isaac Yiadom will be active for the first time. ... I gave Keenum a hard time about his running ability. He had a better zinger at me Monday, calling my salmon colored dress shirt and tie "Easter" gear.  ... The Broncos are averaging 427.5 yards offense per game.