Broncos' Case Keenum has nothing but 'love' for former team 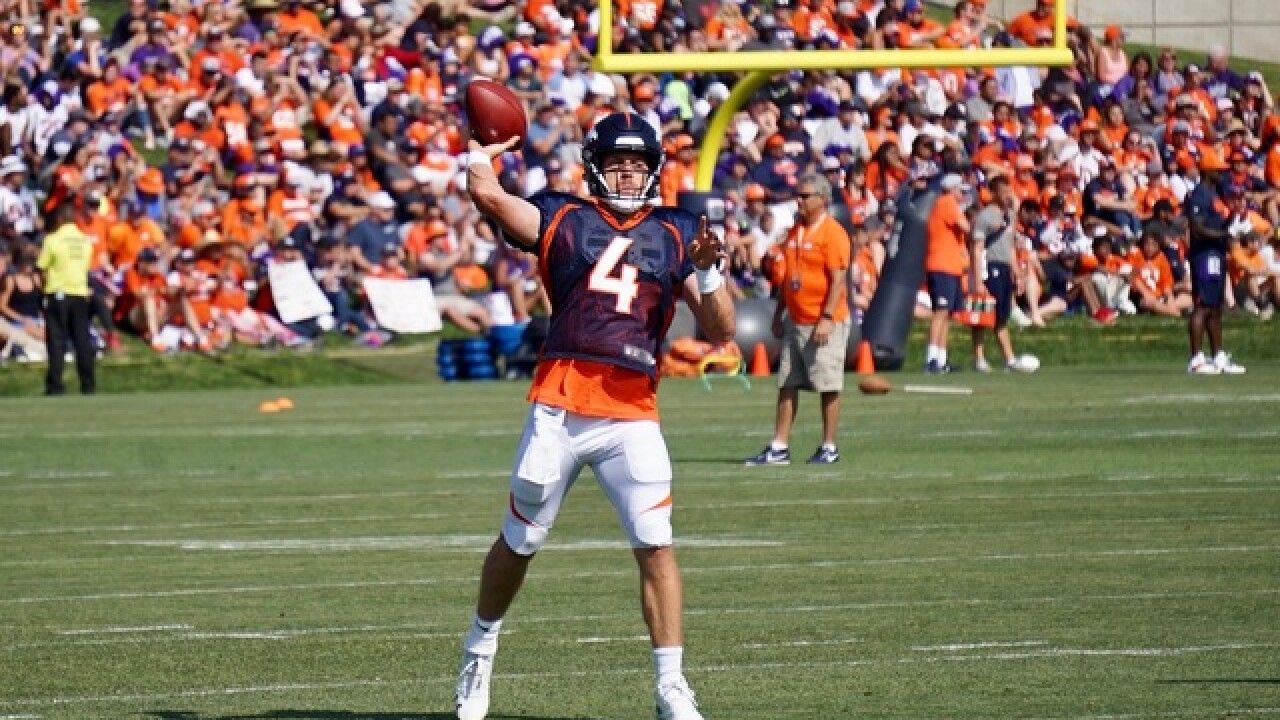 So perhaps it should come as no surprise that given a chance to sling mud Wednesday, he tossed sprinkles. He insists he's not bitter about his divorce with the Minnesota Vikings. And, as far as I can tell, he never asked for sole custody of the Skol chant.

"No, man, I love those guys," Keenum said of the preseason opening opponent. "This Saturday will be competition, and we will get after it. They will be jacked to get on the field. And I will be jacked. No bad feelings."

The preseason presents a weird vibe. Nothing matters, but everything counts. Keenum will play opposite of Kirk Cousins, the free agent who replaced him. Worse, Cousins is the man the Vikings see as the missing piece to a Super Bowl title, which, like it or, reflects their view on Keenum.

All Keenum did last year in Minnesota was toss 22 touchdowns with seven interceptions. He connected 17 times in the red zone with no picks. The Vikings failed to turn the ball over once inside the 20 as Keenum posted a 13-3 record.

But the Vikings moved on, and Keenum moved up to his first real starting gig with no looking-over-the-shoulder required.

"I’ve got a lot of things that I’m really excited about (on Saturday)," Keenum said. "For me, I’m probably going to have to make sure I take deep breaths and calm myself down and don’t get too excited. I  got a firsthand view of how good a defense (Minnesota has). I know we’ve got our work cut out for us. It’s going to be a great test."

Keenum threw his third pick of training camp Wednesday, admitting it wasn't his best practice. Such days send him back into the film room for study. He will like some of what he sees, namely the work of reserve receivers Courtland Sutton, DaeSean Hamilton and River Cracraft. Sutton and Hamilton have established themselves as third and fourth options behind Demaryius Thomas and Emmanuel Sanders. Cracraft, like Tim Patrick, is part of a group trying to land a last roster spot by starting with a good first impression.

“I am pumped. I am excited," said Cracraft, who hasn't played in a game since November 2016 when he injured his knee. "I want to prove that I belong. Mostly to myself, no one else."

Cracraft earns high marks for his work ethic. He is often the first player on the practice field, joined by Hamilton. It allows for him to warm up without being rushed, provides time to clear his head. The extra work has paid off.

"Cray-Cray?," said Keenum of his nickname for the wideout. "He’s playing well. He’s doing really well. I like throwing him the ball. He’s a friendly target. He’s learning, too. He’s learning the NFL game. I think you like having a guy like that, you can move inside, outside, shifty. He’s got good separation at the top of his routes. And he’s learning, too, just like a lot of those young guys. He’s continuing to grow, he’s watching the older guys."

Six players received vet rest days, including Chris Harris Jr., Von Miller, Sanders, Thomas, Derek Wolfe and Darian Stewart. .... Clinton McDonald said he's approaching his shoulder issue as a "day-to-day" process on whether he can return to practice. He told Denver7 it is a different injury than the one that caused him to miss OTAs. Teammate Shelby Harris insisted McDonald will be fine. "He will help us. He's a worker," Harris said. ... Cornerback Tramaine Brock (hamstring) returned to practice. He is considered the favorite to win the nickelback job, but needs to prove he's healthy. ... Bradley Roby picked off Keenum during practice. ... Troy Fumagalli said his groin injury is related to his offseason sports hernia surgery. The team is expected to take a cautious approach with the rookie. ... Broncos alumni attended practice. Among the players at UCHealth center were Jim Turner, Reuben Droughns, Ryan Harris, Orlando Franklin and Daniel Graham. ... Former Broncos star and current Rams cornerback Aqib Talib fielded questions on Instagram Wednesday. He was asked which coach he prefers Wade Phillips or Vance Joseph? "Wade all day!!!" he responded. Talib said he missed his teammates and the fans, but "all good things come to an end."