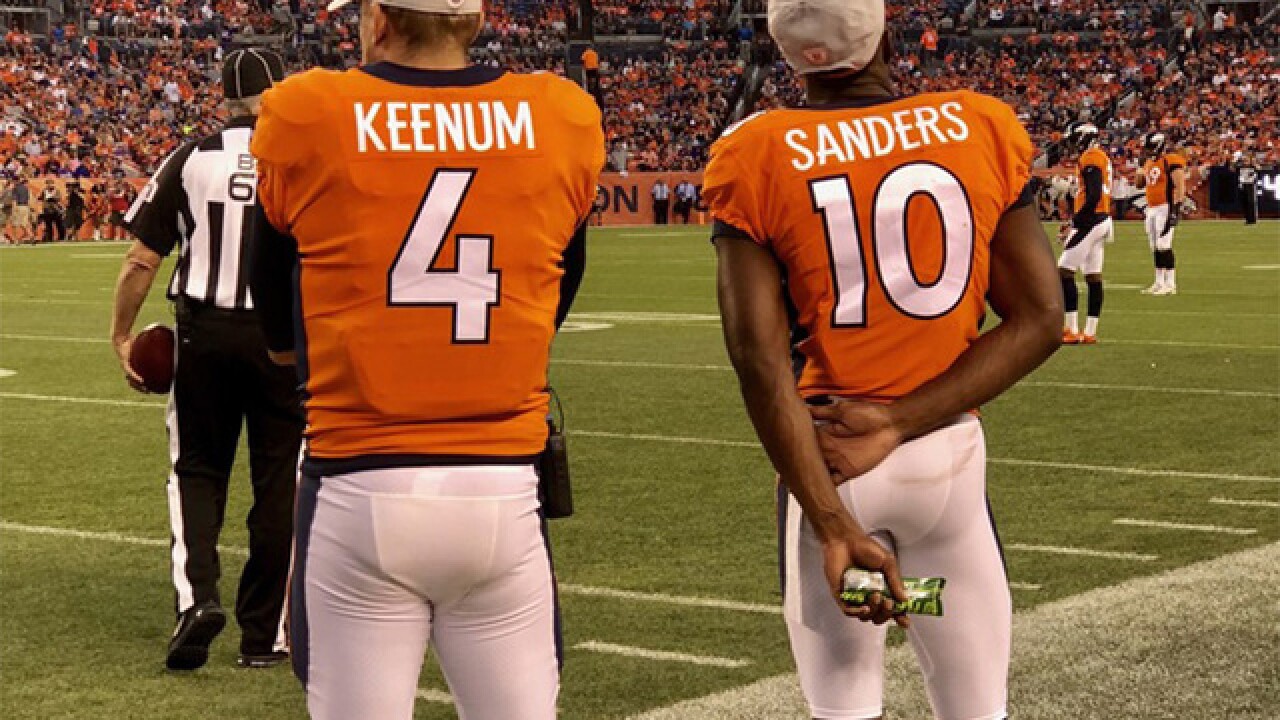 DENVER -- Just when you thought nothing could aggravate Colorado sports fans more than the Rockies' bullpen, the Broncos top offense declared Saturday night, "Hold my drink."

Case Keenum stepped foot onto the field to a rowdy ovation in the preseason opener against the Minnesota Vikings. A half-hour later, the first boos cascaded down from the disgruntled crowd. In two drives, the Broncos new quarterback and first-team offense turned the electric vibe of training camp into a buzzkill.

Following one of the worst seasons in team history, a 5-11 campaign that nearly cost Vance Joseph his job, the Broncos viewed Saturday as a moment for Febreze. Instead, the stench remains until next Saturday against the Chicago Bears.

Rookie running back Royce Freeman (23 yard rushing touchdown), punt returner Isaiah McKenzie (a 78-yard burst of redemption for a score) and third-string quarterback Chad Kelly (KELLY! chants echoed throughout the fourth quarter) provided soothing balm on an open wound. But the Broncos fell 42-28, the late exploits failing to erase the sting of a dull first-team outing.

"It's just frustrating not playing well, and not having a chance to bounce back from it," Keenum said. "I am excited to get back on the field this week against the Bears."

Keenum directed two drives. Both went three-and-out. He finished 1-for-4 for 5 yards. Of course, it represented a micro sample size. But it boasted the hallmarks of too many lost possessions last year. Freeman dropped a pass, though it would have been for no gain. Keenum overthrew rookie Courtland Sutton. And right tackle Jared Veldheer set an ominous tone with a false start on second-and-5 on the unit's first possession.

"We didn't start fast. They did," coach Vance Joseph said. "A lot of self-inflicted wounds. It was disappointing, obviously."

The group never regained its footing. Keenum hoped he'd get one more chance given the six-play cameo.

"I'll be honest, I wanted a series with a few more plays and score a touchdown," Keenum said on the broadcast. "We are going to look at this film, and I am going to talk to those those guys and we're going to get better."

The rough start became amplified by Minnesota's precision. While the Broncos' offense did not produce a first down until midway through the second quarter, Minnesota scored 14 first quarter points. Kirk Cousins, who replaced Keenum in Minnesota, went 4-for-4 for 42 yards and picked on rookie nickel cornerback Isaac Yiadom for a 1-yard score to Stephon Diggs. Latavius Murray gashed the Broncos for runs of 20 and 21 yards on back-to-back plays to set up the initial touchdown.

"We have to look at the film and check out what's up," defensive tackle Domata Peko said. "We just had some guys not in their gap. It's something we've gotta clean up because we take a lot of pride in our run defense."

In fairness, All-Pro linebacker Von Miller, expected to play, sat out, watching in uniform and a ballcap. He didn't participate in the preseason opener a year ago, given the risk-reward balance. Same goes for Saturday as Joseph said Miller is "too valuable."

"I was ready to go. I had my fingers taped. I had my music playing. Then they said I wasn't playing," Miller said. "It's fine. I will be ready (this week)."

Faces turned rouge deep into the second quarter. Trevor Siemian -- remember him -- finished the half 11-for-17 for 165 yards, one interception and a 78-yard touchdown. Paxton Lynch, the man Siemian beat out as the Broncos' starter in back-to-back training camps, failed to make a statement in a crossroads moment. Needing to show he can be trusted for a few weeks if Keenum is unavailable, Lynch shriveled in the spotlight as fans turned their adoration to Kelly.

Lynch threw an interception on his first pass, which was deflected. He finished 6-for-11 for 24 yards. The crowd quickly turned on him, their impatience bleeding over from last season.

"Obviously, I am upset," said Lynch, whose future seems bleaker than ever with the team that drafted him.

Added Joseph, "He made some plays, and he didn’t make some. I haven’t watched (the film) yet, so I can’t tell you exactly what I saw out there. But up and down.”

Kelly provided hope. He entered to a roar, and led a scoring drive. He connected on a short pass to Phillip Lindsay that he turned into a big gain. And he found tight end Matt LaCosse on a 36-yard touchdown as he ran unchecked down the left sideline. It cut the Vikings' deficit to 27-21. He followed with a 19-yard scoring pass to Lindsay to give the Broncos a 28-27 lead with 10:40 remaining in the fourth. Kelly's poise stood out as he faced down a pass rusher, absorbing a late hit, and still connected for the touchdown. Kelly finished 14-for-21 for 177 yards with two touchdowns and one interception.

"I wasn't surprised because that's what we have seen in camp. It doesn't always look pretty, but he makes plays," Joseph said before addressing the issue of Kelly receiving second-team reps. "We will see. We will look at that."

If Kelly moves up the depth chart, it likely spells the end for Lynch. The other question is if the Broncos will attempt to sign a free agent like Matt Moore or T.J. Yates or trade for a backup as a security blanket. Lynch's performance would seem to only heighten the urgency to add more depth since Kelly has never taken a snap in the regular season.

That the Broncos remained competitive in the first half traced back to Freeman and McKenzie. Working with the first-and-second team, Freeman made a push for the starting job with a 23-yard run for the Broncos' first score. He showed maturity with his jaunt, setting up the safety on a zone read play before outrunning a defender to the pylon.

"I just have to not focus (on starting) and keep doing my job," said Freeman.

McKenzie found redemption with his best moment as a Bronco. Following six fumbles a year ago, McKenzie entered camp on the roster bubble. His failures humbled him.

"I give myself an 'F' grade for last season," he said recently.

He has shown better technique on punts, catching the ball away from his chest. He showed off his intriguing speed after hesitating and zooming past defenders for a 78-yard touchdown.

"Each and every day is different than last year. Every day I was out there catching punts," McKenzie said. "Coach (Tom) McMahon and VJ were pushing me everyday."

In relief of Lynch, Kelly restored the crowd's volume. It was a reminder of good times, but it needs to happen for the first team before hope can return.

"You can't have negative plays, can't have penalties. We never got into a rhythm, never got that first down and got going," Keenum said. "Yeah, it definitely left me wanting for more."

Reserve safety Jamal Carter suffered a hamstring injury in the second quarter. He required two teammates to help him to the locker room. ...  Cornerback Marcus Rios hurt his hip, and tight end Austin Traylor suffered a shoulder injury. ... The Broncos felt the pinch on the NFL's emphasis on safety penalties. Officials flagged safety Justin Simmons for contact on a defenseless player, and cornerback Marcus Rios was penalized for illegal contact. ... Outside linebacker Jeff Holland sacked Kyle Sloter in the third quarter. Holland is an undrafted free agent with a realistic chance of making the team. An undrafted free agent has made the final roster every year but one since 1997. ... Receiver Tim Patrick continues to show well as he competes for a job. ... Safety Will Parks finished with a team-high five tackles, and delivered a sack. ... Linebacker Josey Jewell continues to impress, delivering five combined tackles. ... Rookie Bradley Chubb on his first game, "It was crazy. Just walking out onto the field, just feeling the vibe, I have been dreaming of this since I was 5 or 6 years old." ... Vikings kicker Daniel Carlson, who prepped in Colorado Springs, signed autographs and was cheered wildly by family and friends in the south stands after the game.