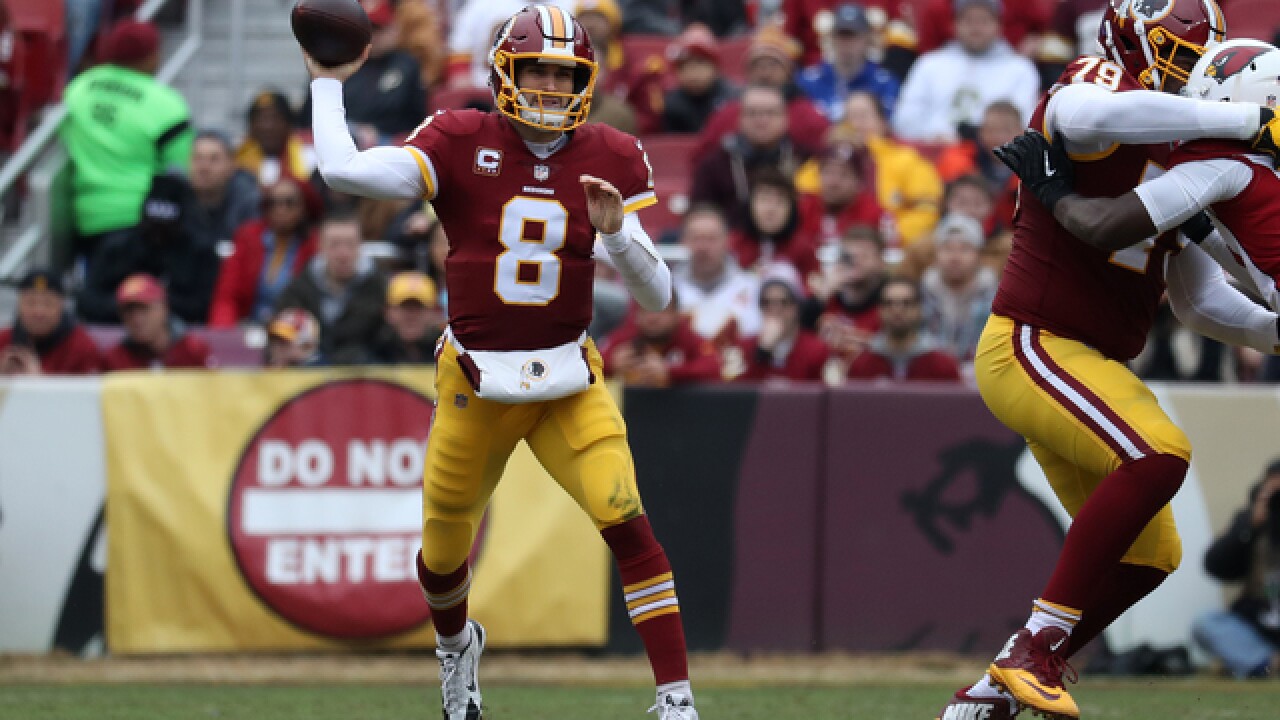 Copyright 2017 Scripps Media, Inc. All rights reserved. This material may not be published, broadcast, rewritten, or redistributed.
Rob Carr
<p>LANDOVER, MD - DECEMBER 17: Quarterback Kirk Cousins #8 of the Washington Redskins passes in the second quarter against the Arizona Cardinals at FedEx Field on December 17, 2017 in Landover, Maryland. (Photo by Rob Carr/Getty Images)</p>

CENTENNIAL, Colo. -- The Broncos' quarterback of the future could be on display Sunday in Washington. Forget Paxton Lynch and Brock Osweiler. I am talking about Kirk Cousins.

The Broncos remain undecided on Sunday's starter. Brock Osweiler earned the job with his win over Indianapolis, but showed no bitterness Wednesday when explaining, "You focus on what you can control." The choice hinges largely on Paxton Lynch's left ankle. After three weeks off, he showed rust and favored the leg during practice. He said it would be up to the training to decide if he's ready to play. Yet, it would require a Bob Beamon leap of faith to consider Lynch the solution heading into the offseason.

The latest carousel ride drives home the point why finding a starter is the Broncos' top priority. Cousins tops the list. He is reliable, durable and successful -- all traits that would be welcomed after the Broncos consecutive seasons without a playoff game.

General manager John Elway spent wisely on defense in shaping the Broncos over the past seven seasons. It includes five postseason berths, two Super Bowl appearances and one championship. However, the against-the-grain model left splinters this season. The Broncos paid outside linebacker Von Miller quarterback money. He's lived up to expectations. But going cheap at the league's most high-profile position has bit the Broncos. Over the past three seasons, including Peyton Manning's final year, the Broncos rank near the bottom third in nearly every meaningful passing category.

Trevor Siemian regressed, and faces an uncertain future in Denver after suffering his fourth shoulder injury in two seasons. Osweiler showed flashes, but is 5-5 as a starter in Denver, profiling better as a capable backup. And Lynch has done nothing to suit his first-round status, unable to win the job or keep it this season because of shoulder and ankle issues.

Cousins, meanwhile, has starred over the past three seasons. He is a young 29, having started only since 2015. During that stretch he has 19 300-yard games, and 43 contests with a touchdown. He has thrown for 3,336 yards, 24 scores and nine interceptions this season. Criticized for costly mistakes early in his career, he has evolved. His interception percentage ranks third-best in Washington history.

Let's be clear. Cousins is not on the toll road to Canton. However, he's solid and gutsy. He plays with an attitude and edge not witnessed in Denver since Manning retired. And he is not afraid of the moment. He owns eight game-winning drives over the past two seasons, including an NFL-best four this year. Availability is a skill. Cousins has not missed a start since 2015 despite suffering 38 sacks this season.

Of course, skepticism exists. The idea of paying Cousins $25 to $30 million a season remains hard for critics to stomach. All I can say is look at the contracts of the Lions' Matthew Stafford and Oakland's Derek Carr. This is the price of doing business. Denver won without great quarterback play in 2015, and survived in 2016. The Broncos bottomed out this season, posting an eight-game losing streak -- their longest since 1967 -- while winning one road game. Denver has not triumphed in a visiting AFC West stadium since Manning retired.

All signs point toward needing an elite signal-caller for a quick rebound.

Is Cousins in the top 5? No. But he sits snugly in the top 10. He enhanced an offense that included receivers DeSean Jackson and Pierre Garcon. This season, in my opinion, ranks as his best. Guiding an offense decimated by injuries -- the line is a mess; Washington cannot run the ball -- Cousins elevated his game, carrying his team for long stretches.

He would have to do something similar in Denver. The Broncos placed zero offensive players in the Pro Bowl. This was not an accident or a snub. They need more playmakers beyond the return of a healthy tight end Jake Butt. Cousins has proven he can win with less

But why would Cousins come to Denver? He was asked about the Broncos on Wednesday and provided no insight. There's no reason to tip his hand. He has bet on himself the past two seasons, and put himself in position to receive a vault of cash. Washington, unable to work out a longterm deal with Cousins, could franchise him for a third-straight year, though the cost would be a breathtaking $34.5 million guaranteed for one season.

As for Denver, Cousins allowed last week he is seeking continuity. This represents a fair demand for a future face of a franchise. The Broncos have had six losing seasons and seven Super Bowl appearances over the past 34 years. They are motivated to win, spend money and typically are in the hunt ever year.

Cousins, though, will be courted like no other player. His suitors figure to include: Arizona, Buffalo, Jacksonville, Cleveland and the New York Jets. He was forever linked to joining his former Washington offensive boss Kyle Shanahan in San Francisco. However, that talk has chilled with the terrific play of Jimmy Garoppolo.

Anyone who watched the Broncos this season knows their problems extend beyond one position. However, a U-turn begins at QB. And the answer -- not Brock or Paxton -- could very well be on the field Sunday in Kirk Cousins.