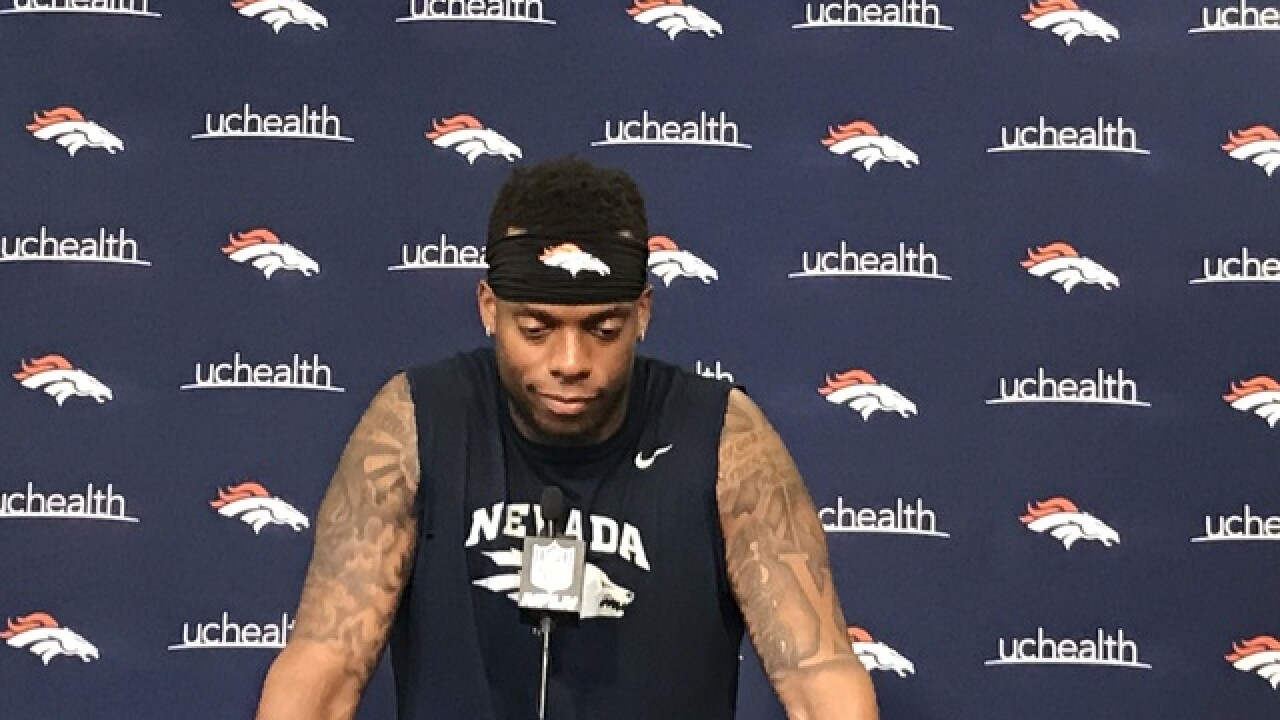 CENTENNIAL, Colo. -- The NFL attempted to provided clarity on its national anthem policy Wednesday. Now, based on player reactions, it is fair to wonder if it reignited a controversy that had waned by season's end.

The NFL decided that players and league personnel on the sideline must stand for the anthem, while permitting those uncomfortable with this rule to remain in the locker room. President Donald Trump, who galvanized NFL players last September when he called for owners to "fire" those who disrespect the anthem, applauded the league's new policy. Trump suggested players who protest "shouldn't be in the country."

"I say disgusting because of our First Amendment rights. We have freedom of speech, freedom to protest. So if somebody protests something, now we get someone kicked out of the country? That's not how things should work in my opinion," Marshall said. "We are supposed to have a conversation about things, talk about things, work things through. Everybody is not going to agree. Everybody is not going to have the same opinion. Just because somebody has an issue with something going on in this country they should pack up and leave? That's absurd."

Marshall and All-Pro cornerback Chris Harris admitted they understood why the league adopted the policy, with Marshall explaining, "I don't like it, but they are trying to protect the shield." However, both believe the players should have been consulted before revisions were made. Under the new guidelines, the NFL can fine teams for players who protest on the sidelines, and, the team is free to levy additional fines. Jets chairman Christopher Johnson said he would not dock players who demonstrate or protest on the field. Broncos CEO Joe Ellis plans to discuss the issue with players next week.

In attempting to find a middle ground, the league has created a potential new issue. The policy, as Harris admitted, could create more unity from players.

Players have had preliminary conversations about the new policy, according to Marshall, while admitting he hasn't given much thought about what he plans to do.

Following the lead of his former college teammate Colin Kaepernick, Marshall took a knee for the first eight games of the 2016 season to raise awareness about social injustice. The linebacker said Thursday he appreciated the support from coach coach Gary Kubiak and Ellis in 2016, saying, "They had my back."

Marshall helped create change in the Denver Police Department's use-of-force policy after meeting with police chief Robert White. Multiple companies cut ties with Marshall for his stance. He remains active in the community, and will take kids from his Williams-Marshall Cares foundation to Washington D.C. this weekend as a reward for completing a leadership program.

Few players were protesting last season when President Trump said in September that owners should "fire" those who did, while advising fans to walk out of stadiums. It galvanized players. Only 19 Broncos players stood for the national anthem in Buffalo following Trump's remarks. After coach Vance Joseph met with the team's leadership council, the Broncos players, with some dissension, created a united front the following week. They decided as a team they would stand for the anthem.

While the new NFL policy offers alternatives, it creates issues for players. Those who don't stand on the sideline could be perceived as protesters by their absence alone. Harris admitted the media would keep a scorecard regarding players missing for the anthem. Derek Wolfe, Domata Peko and Matt Paradis said they would stand for the anthem.

However, what will the reaction be if a huge chunk of the roster is missing?

"Instead of seeing 60 players, 53 players, and now you see only 30? I don't know. That might leave a bad taste in some people's mouths," Marshall said. "I know people will definitely have some comments on it. It won't be as bad as kneeling, but if a lot of players stay in the locker room and only like 20 come out it could be an issue."

Chris Harris Jr. remains pleased with new techniques added in coverage. And he admitted he's not moving from the slot anytime soon. "There's nobody that can do what I do," Harris said. Harris looks forward to more blitzing this season after doing it only "five times" a year ago. .... Left tackle Garett Bolles has added weight, playing closer to 310 pounds. He had trouble keeping his weight near 300 last season. ... Brandon Marshall will play lighter. He has dropped from 238 pounds to 228 and plans to go at 228 to help in all facets of his game. Marshall did not have surgery on his torn rotator cuff, allowing it to heal on its own. He played the final 13 games in extreme pain last season, finishing with 106 tackles.