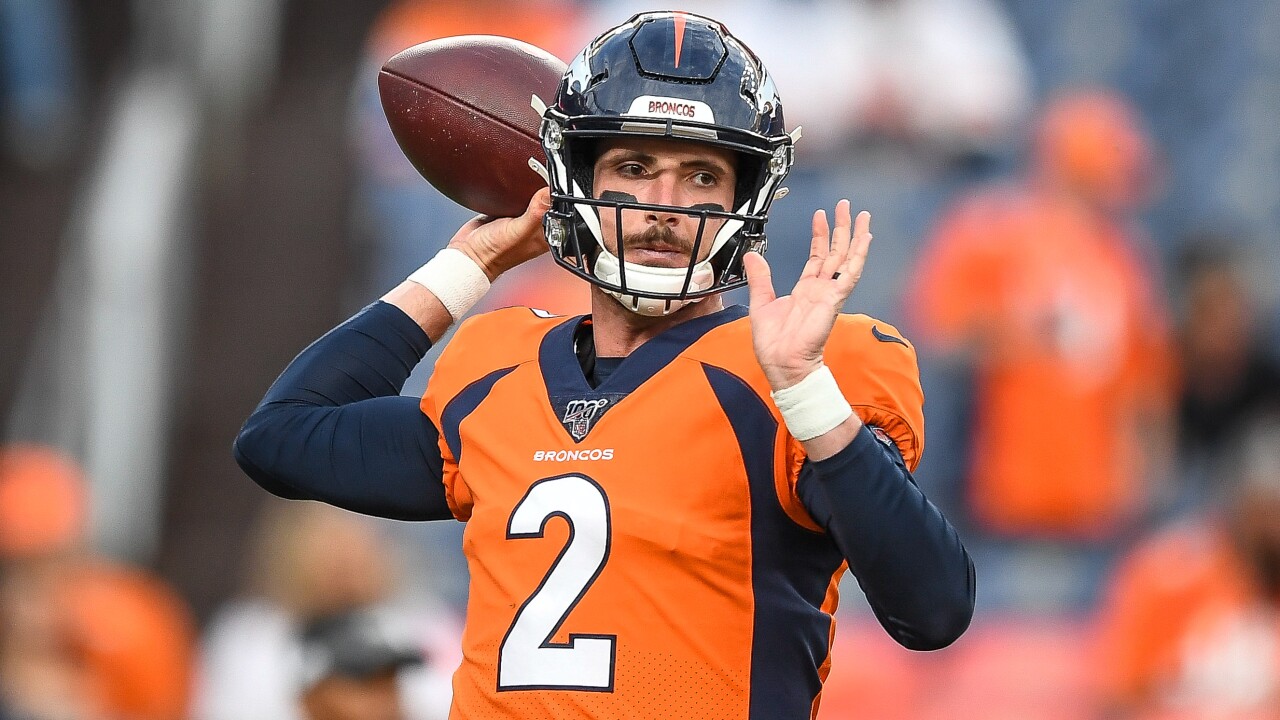 ENGLEWOOD, Colo. — Brandon Allen never wavered. He logged four years at Arkansas. He exhausted all options preparing for the combine, including hand massages in hopes of lengthening his fingers. The Jaguars drafted him in the sixth round in 2016. He has been waived three times by two teams, including the Los Angeles Rams, and now, in his fourth year in the NFL, the stage is his.

He will make his NFL debut Sunday against the Cleveland Browns.

"This is the opportunity everybody wants," said Allen, a 6-foot-2, 209-pounder, who credited Joe Flacco for helping to prepare him for this chance. "I feel comfortable in this offense. I am excited."

Life works in weird ways. Allen finally receives the keys to the car and the fans of his team want someone else. Allen and this week's backup, Brett Rypien, are viewed as placeholders for Drew Lock. The Broncos selected the former Missouri star in the second round last April, tabbing him as the quarterback of the future. For many in Broncos Country, the question is simple with Lock: "How soon is now?"

They want to see the kid who won the backup job in training camp before spraining his thumb on a preseason scramble against San Francisco. He was medically cleared two weeks ago, he said, but has yet to practice. Lock indicated Tuesday that he has spoken with general manager John Elway and offensive coordinator Rich Scangarello about their plan for him. It loosely follows this script. Open his 21-day practice window to come off injured reserve after the bye week, which would leave him in position to serve as a No. 2 against Minnesota and begin creating a foundation to start at some point.

"We have talked about it a little bit. Obviously, I trust them to put the plan in place whenever they feel it's necessary to come back to practice and play. I am going to stick to my routine. When I do practice, it will be my first time taking a snap in almost 10, 12 weeks. So like I said, I think they have a good plan with that," Lock said. "They want me to get some reps so they are not putting me in a game without practice a little bit. So I think they have an awesome plan."

Lock has spent the first half of this season taking notes in meetings, and spending several hours a day working with the virtual reality simulator that allowed him to see the practices through Flacco's eyes. However, he admitted, "that I can further that progress by getting some reps, by going into practice, getting my feet underneath me and starting to recall some things by actually physically doing it instead of just watching -- that will be big for me."

In his short time in Denver, Lock has shown extreme confidence. So naturally, it would be disappointing if he doesn't start some games. When becomes the question. Looking at the schedule, the home game against the Chargers on Dec. 1 makes sense. That would allow for two weeks of practice prior to the Minnesota and Buffalo road games before a potential audition. Given the Broncos' record, it would help to gather as much information on Lock's readiness before entering the 2020 draft that is ripe with quarterbacks.

For now, Rypien will serve as the reserve clause in this pocket change. He failed to land the backup spot in training camp, but believes his time on the practice squad team has helped prepare him if needed.

"We have a a lot of good guys (on practice squad). It's been nice to act like I have been playing even though I haven't been getting game reps," Rypien said. "Those reps helped for sure."

Allen brings mobility and good arm strength. He appeared in 42 college games, throwing 64 touchdown passes. Allen admitted he will have plenty of family at Sunday's game. If not his last chance, this is, thus far, represents his best chance even if fans are impatiently waiting for someone else.

"That's not something I am worried about," Allen said. "I am focused on Cleveland."

Footnotes
The Broncos are expected to place Flacco on the injured reserve soon with the herniated disc in his neck. He would be sidelined roughly six weeks with the issue, leaving little reason to save a roster spot. He might have played his last game in Denver. All three quarterbacks now in the mix praised Flacco for his professionalism and preparation ... The Broncos will place linebacker Corey Nelson (torn biceps) on injured reserve. The special teams player suffered the injury against the Colts. ... There is good injury news. left guard Dalton Risner said his right ankle, injured against the Colts, is feeling better. He said he will play Sunday. He is having a terrific rookie season.