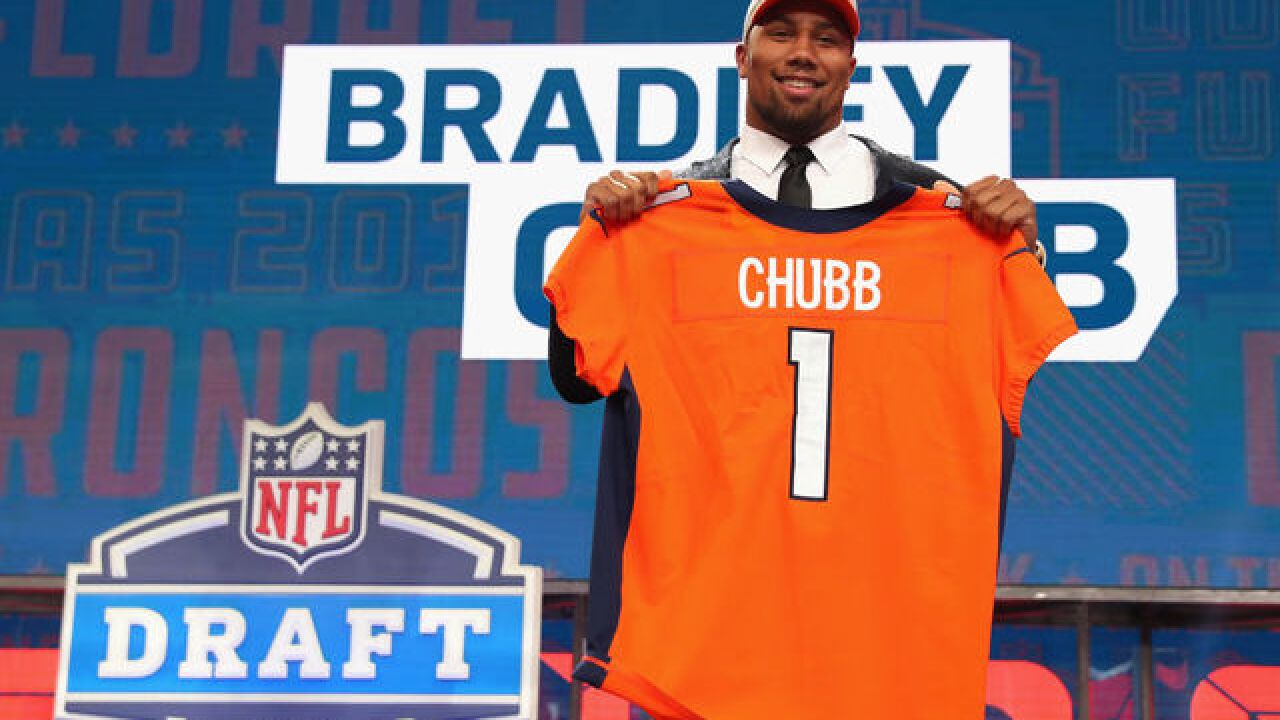 2018 Getty Images
Tom Pennington
<p>ARLINGTON, TX - APRIL 26: Bradley Chubb of NC State poses after being picked #5 overall by the Denver Broncos during the first round of the 2018 NFL Draft at AT&T Stadium on April 26, 2018 in Arlington, Texas. (Photo by Tom Pennington/Getty Images)</p>

CENTENNIAL, Colo. -- The size draws gasps. Bradley Chubb stands 6-foot-4, weighs 270 pounds and is leaner than a Snack Well's cookie. He arrived in Denver as the fail-safe pick. The Broncos, shocked he was available at the fifth overall, could not turn in the card quickly enough.

Chubb brings a reputation as a disruptive player with a redline motor. He learned his work ethic from his family. If you are going to do something, do it well. Chubb delivered 10 sacks and 26 tackles for a loss last season, after going back to school for his senior year despite having a first-round grade as a junior. He played in a 4-3 scheme, but stood up frequently on the outside, making him believe he can transition to a 3-4 smoothly.

He can stop the run. He has proven it. But his ability to harass the quarterback is real.

"I would describe myself as relentless. That came from me always wanting to make plays," Chubb said Friday at Dove Valley. "I always want to be around the ball."

Chubb credits his success to his family always being around. His father Aaron, mother Stacey and older brother Brandon attended Friday's presser. They weren't about to miss a thing. Brandon plays for the Detroit Lions. He practiced Thursday, caught a flight from Detroit to Dallas and then hopped onto a helicopter to AT&T Stadium. He landed in a church parking lot nearby then raced into the draft with roughly 30 minutes to spare.

"It was close. But it meant so much for him to be there," Bradley Chubb said.

Brandon found the helicopter on Yelp -- who knew? -- and made it happen.

"There was no way he was going to miss it," Stacey said.

Broncos players have reached out to Chubb. So many, in fact, that Chubb's phone froze from the battery of text messages. Von Miller let the kid know he was happy with the pick. The world already knew that with Von's screaming endorsement on social media on Thursday.

"I saw the video. Someone showed me during the press conference (Thursday). It was pretty cool," Chubb said. "I am looking forward to working with him and learning from him."

Chubb plans to choreograph dance moves with Miller. Chubb drew praise for his college exuberance, showing off gyrations while also angering quarterbacks by stealing their towels. The Broncos finished with 33 sacks last season, ranking 22nd overall. They believe the Orange Rush is back with a healthy Shane Ray and the addition of Chubb.

"I love the pick," guard Ron Leary said. "We are going to improve offensively. (Quarterback) Case (Keenum) is already showing leadership. If he takes care of the ball, it's only going to make our defense better."