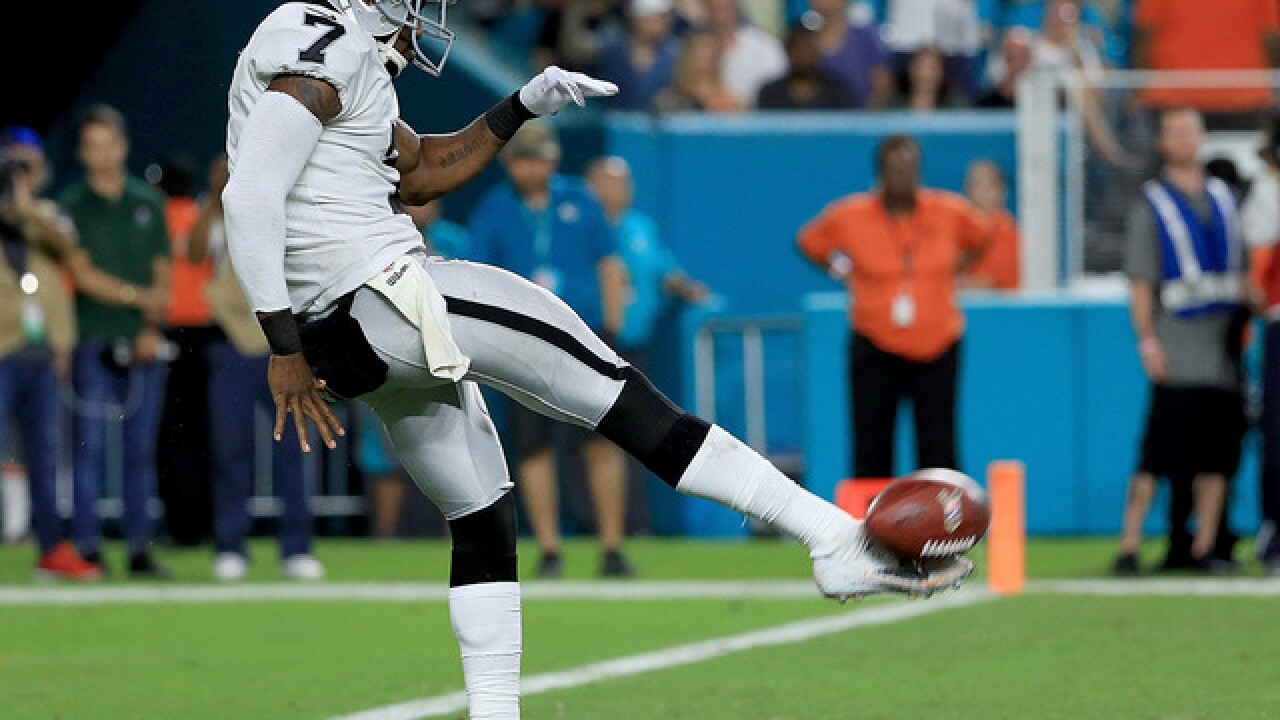 Image copyright 2018 Getty Images. All rights reserved. This material may not be published, broadcast, rewritten, or redistributed.
Mike Ehrmann
<p>MIAMI GARDENS, FL - NOVEMBER 05: Marquette King #7 of the Oakland Raiders kicks a punt during a game against the Miami Dolphins at Hard Rock Stadium on November 5, 2017 in Miami Gardens, Florida. (Photo by Mike Ehrmann/Getty Images)</p>

DENVER -- It's good to be the King. Marquette King, that is.

The Broncos continued their methodical quest to address specific needs during the second wave of free agency.

Thursday, the Broncos upgraded their woeful special teams, agreeing to a three-year deal worth up to $7 million with the charismatic King.

Oakland cut ties with King last week, the outgoing player a casualty of coach Jon Gruden's new regime. King is well known in the AFC West for his booming kicks and outrageous celebrations. He has been penalized for taunting, and drew the scorn of Denver fans with his "Riding Bronco" routine after a punt in 2016. He plans to avoid flags, but he will not stop dancing. His routine, however, will change.

"I was just doing (The Ridin' Bronco) to troll you'all. I have to come up with something new. But I will still be me. Nothing will stop me from being me," said King, who acknowledged he will wear something besides No. 7 in Denver. "I know I can't get penalties. It's nothing that should happen again."

His antics aside, the fact remains he is a proven performer since 2012. He owns a career average of 46.8 yards per punt with 156 kicks inside the 20-yard line.

King represented a Raiders cornerstone player after signing a five-year, $16.5 million contract. He was discarded two seasons into the deal, saving the Raiders $2.9 million in cap space. His personality and struggles as the holder on field goals appeared to drive the Raiders' decision.

"I really didn't get a reason. I never met with Gruden. I saw him on car commercials," King said. "(I chose Denver) because there is somewhat of a revenge factor."

King, 29, averaged 47.4 yards per attempt last season. Riley Dixon, in his second season, averaged 45.6 despite playing his home games at altitude. His inconsistencies were one of many glaring issues with special teams so bad that it cost coordinator Brock Olivo his job after one season. Dixon becomes trade fodder.

"I got a homey feeling when I was here," King said. "It was the right fit for me."