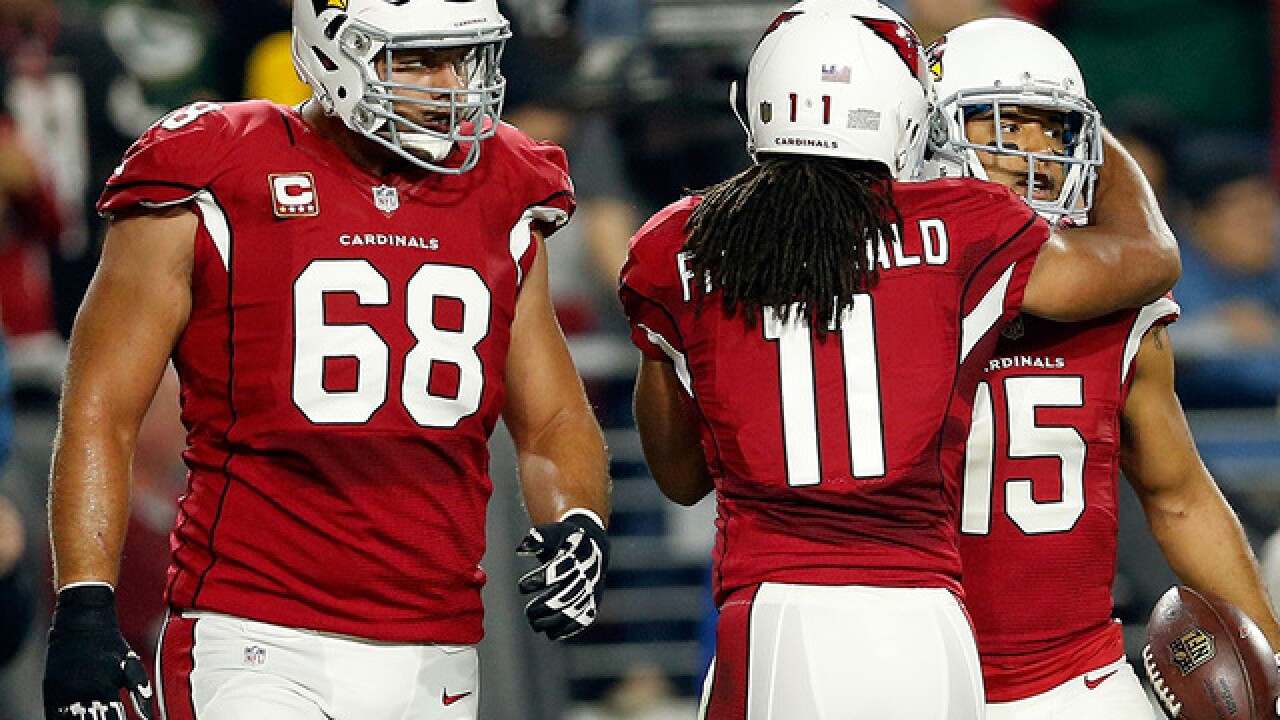 Copyright 2018 Scripps Media, Inc. All rights reserved. This material may not be published, broadcast, rewritten, or redistributed.
Christian Petersen
<p>GLENDALE, AZ - JANUARY 16: Wide receiver Michael Floyd #15 celebrates with wide receiver Larry Fitzgerald #11 and tackle Jared Veldheer #68 of the Arizona Cardinals after Floyd catches an eight-yard touchdown in the first quarter against the Green Bay Packers in the NFC Divisional Playoff Game at University of Phoenix Stadium on January 16, 2016 in Glendale, Arizona. (Photo by Christian Petersen/Getty Images)</p>

DENVER -- Anyone who watched the Broncos last season can say with authority their offensive problems extended beyond quarterback.

Signing Case Keenum, if he protects the ball like he did with the Minnesota Vikings, should provide a boost. However, he needs to remain upright to help. The Broncos attempted to address their pass blocking shortcomings on Friday, acquiring veteran tackle Jared Veldheer from Arizona for a sixth-round pick (182nd overall) in this April's draft.

Veldheer, 31, brings experience, and a decent resume. A left tackle for the majority of his eight-year career, Veldheer started nine games at right tackle last season before suffering a season-ending ankle injury. He projects to start for the Broncos, despite missing 11 games the past two seasons. Veldheer, who spent the first four years of his career in Oakland, brings a $6.5 million salary and per game roster bonuses.

The Broncos allowed 52 sacks last season, tied for third most in the NFL. Veldheer has yielded 28 sacks in his career. The team believes new line coaches and a revised blocking scheme will help. The Broncos used deep drops in pass protection a year ago with their tackles, which did no favors for rookie Garett Bolles or a revolving door of right tackles.

With the addition of Veldheer, Menelik Watson becomes a roster bubble candidate. In a similar situation last summer, Donald Stephenson only survived after accepting a paycut. Watson will compete for a rotational role.

The Broncos' lone big signing remains Keenum. Like last year, the Broncos are attempting to strike it big with fairly low-risk, high-reward candidates. They signed defensive tackle Clinton McDonald, cornerback Tramaine Brock, who is in line to start at nickelback, and acquired Veldheer.

Earlier Friday, the Broncos watched Josh Allen's pro day at Wyoming. With Gary Kubiak among the NFL brass in attendance, Allen put on a show during his 60-pass session. Sam Darnold has become the favorite to go first overall to Cleveland, but Allen gave scouts plenty to think about. The Broncos are considering taking a quarterback fifth overall -- they have been linked to Baker Mayfield -- though it would be hard to see how that would make them better next season with their goal to return to the playoffs. Other possibilities at No. 5 include defensive end Bradley Chubb and cornerback Denzel Ward.