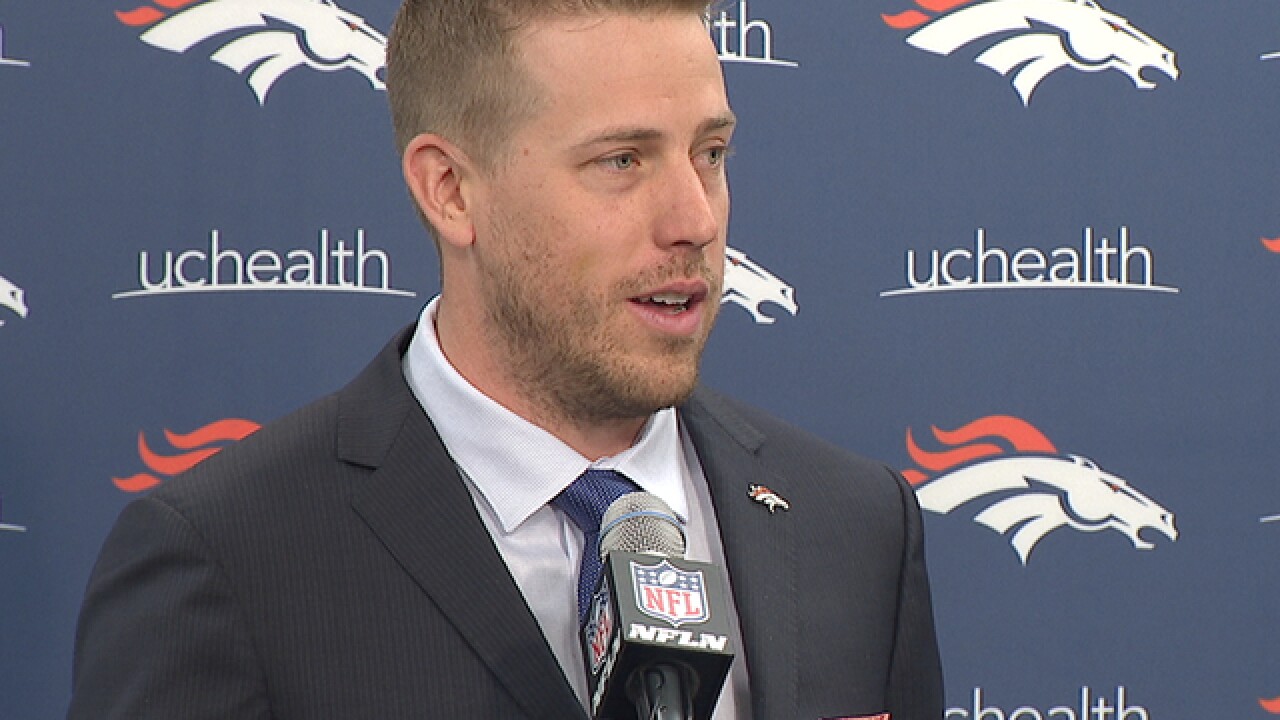 Pool
<p>John Elway introduced Casey Austin Keenum as the “Broncos’ starting quarterback” on Friday morning in the team’s Fieldhouse. Incredibly, Zimmer, the Minnesota coach, never did acknowledge Keenum as his starter – even weeks after Case took over as the Vikings’ quarterback as starter in Game 3 and didn’t relinquish the role though the NFC Championship.</p>

ENGLEWOOD, Colo. -- It all began with an audible. The Broncos were prepared to terminate coach Vance Joseph after one season. Upon further review, it was deemed unfair given the atrocious quarterback play from three signal-callers Joseph didn't choose. Joseph returned, and general manager John Elway determined no more American Idol auditions at the league's most important position. No more training camp drama.

The Broncos signed free agent Case Keenum, a 13-game winner in Minnesota, for a guaranteed $25 million, slightly less than the $84 million initial top target Kirk Cousins secured with the Vikings. Keenum has instilled confidence throughout the building, showing leadership needed after a 5-11 season stained by an eight-game losing streak.

Keenum faces his former team tonight in the preseason. Let's start there on my Three Things You Should Know before the 7 p.m. kickoff at Broncos Stadium at Mile High:

Case Keenum has thrown three picks in 11 training camp practices. He looks every bit the player who was second only to New Orlean's Drew Brees in completion percentage. What to watch for from Keenum in his max of two series tonight: He is more accurate than a DNA test. You should see that, especially on passes in the middle of the field where receivers catch the ball in stride. Also, Keenum, the team's shortest fulltime starter since 5-foot-11 Marlin Briscoe in 1968, remains comfortable under center, which should help diversify the running game and help play-action routes.

2. The Kids are all right

So much has been made about receiver Courtland Sutton. He fit the profile of how the Broncos drafted. They eliminated players on their board with character and football commitment red flags, learning from a year ago. Sutton, a tireless worker, fell into their lap. Emmanuel Sanders told Denver7 he's never seen a teammate with more prowess on the 50-50 fade route pass. "It's more like an 80-20 or 90-10 with him," Sanders told me. Sutton must learn all the routes to become more unpredictable to cornerbacks. Bradley Chubb, the fifth overall selection, hasn't burst in camp like Sutton. But I believe he will tonight when he's finally allowed to hit the quarterback. Chubb is unique in every way at 6-foot-5, 270 pounds, capable of stopping the run and getting a push. Last year's rookie class boasted one contributor: left tackle Garett Bolles. You will leave tonight believing at least four rookies will make a meaningful impact this season.

3. Jobs up for grabs

Keep an eye on right guard Connor McGovern and right tackle Jared Veldheer. In an ideal world, there's no contesting their positions. But there are a few in the balance. Can Tim Patrick or River "Cray-Cray" Cracraft create separation in the battle for a final receiver spot? And will former CU star Phillip Lindsay excel at special teams in kick return and coverage units? He might also get a chance on punt returns. It feels like he's competing with Isaiah McKenzie for one roster spot as it sits now.