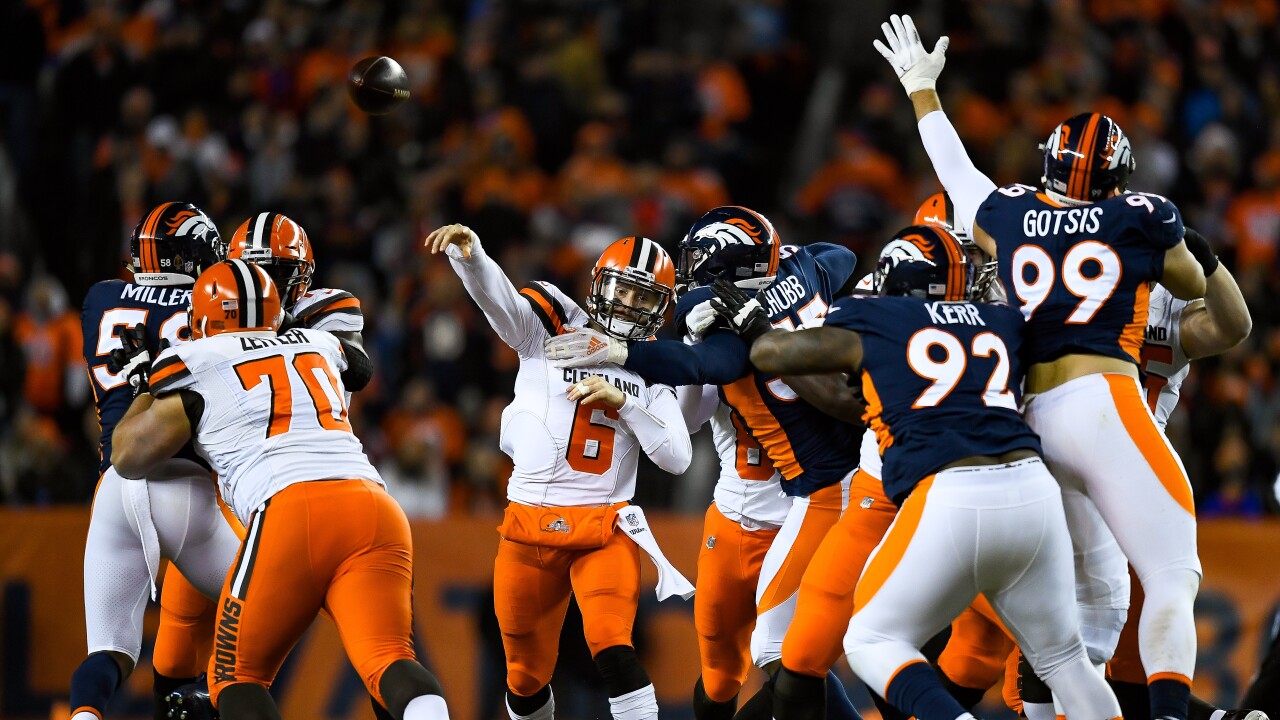 DENVER -- With too few exceptions, the Broncos have bathed in the darkness the past two seasons, the warm glow of wins hard to remember. They arrived Saturday with everything, seemingly, at stake: a potential playoff berth, their coach's future, and a chance to move closer to avoiding back-to-back losing seasons for the first time since 1972.

This game will not go straight to ESPN Classic. Or anywhere but a cutting room floor. It was ugly and rugged, but with the outcome forever in doubt. After a myriad of questionable coaching decisions on both sides in the final five minutes, it came down to this: the Broncos trailed by one point with the ball and 113 seconds remaining.

It ended like this: Case Keenum destroyed on a blitz by Jabrill Peppers, ending the Broncos' last gasp -- in more ways than one -- on fourth and 10.

"We really needed this one," linebacker Brandon Marshall said. "I don't know what to say."

The Broncos, who fell to 6-8, received a final chance after the Browns elected to go for it on fourth down instead of taking a chip shot field goal. Adam Gotsis smothered Nick Chubb for a loss. And you know the rest. Gotsis' play did little to cool the vitriol over coach Vance Joseph's decision to play conservative in the team's second-to-last drive. Joseph's coaching status has become framed as a matter of when, not if. The Broncos are 11-19 under his watch, including one game under .500 at home. It would be a surprise if the Broncos make a move this week, but I never say never with this franchise after the past two years and back-to-back losses to the 49ers and Browns.

About that call with 4:39 remaining.

With a fourth-and-1 at the Browns' 6-yard line, the Broncos did something they eschewed last Sunday in a loss that made this a must-win. Joseph elected for a field goal. Brandon McManus' 29-yard boot shaved the deficit to 17-16. To say it was an unpopular decision is a dramatic understatement. The crowd of 71,000-plus hated the choice, howling in disgust. The Broncos chased points twice in the fourth quarter against San Francisco and flopped both times on fourth down. This decision placed faith in the defense, and reflected the team's inability to run the ball against a crowded box and no Emmanuel Sanders to stress coverage. It became an uneasy strategy when Cleveland running back Nick Chubb bolted 40 yards into the open, leaving Cleveland in field goal range and gobbling seconds off the clock. It also sat in juxtaposition to Joseph's mantra down the stretch, to play to win.

"I wanted to get points there," Joseph said. "I trusted our defense to get a stop."

On Nov. 19, after the Chargers win, Joseph preached the importance of aggression.

"We’re trying to win the game. It’s as simple as that, and I’ll do it again. I told our guys that—fourth-and-1, we’re going to go for it.”

Several players admitted they wanted another play. They also admitted that decision is above their paygrade.

Not going for it left the Broncos going nowhere after their eighth loss of the season. It also illuminated inconsistency. And truth be told, the way the Broncos' season has gone, they would have likely been stuffed on fourth down. Even more popular decisions are not right ones when you have a losing record with two games remaining.

"A lot of anger at myself. There were some plays I could make that I didn't. And there's plays on want back," said Keenum, who finished 31 of 48 for 257 yards and two costly picks. "A lot of anger. I want the ball in my hands with a chance to win the game. And to get that close and to not do it, it pisses me off."

Instead of Keenum directing a fourth-quarter comeback, the final image was jarring. A few thousand Browns fans cheering Baker Mayfield as he was interviewed on NFL Network before he jogged off to wild applause.

"We were supposed to win that game and we didn't," said an emotional safety Will Parks. "We came up short. We have to start winning these games."

The first 30 minutes boasted flashes of greatness draped in yellow flags. Cleveland opened the second half with a 9-minute, 11-second drive that amounted to running on a treadmill. Cleveland's clumsy push, fueled by penalties and short passes, ended with a turnover. Gotsis, enjoying the best stretch of his career, burst through the line and strip-sacked Mayfield. Derek Wolfe pounced on the ball, providing the Broncos a change of possession at their own 42-yard line.

In a game that was more graffiti than da Vinci, the Broncos secured a three-point lead with another field goal. The stops, starts, and penalties made for a difficult watch. Keenum had moments of brilliance and incompetence. Early in the fourth quarter, Keenum unleashed one of his worst passes of the season, an early Christmas gift to T.J. Carrie. It was like an out-of-context Hail Mary.

"First (interception), they were in man coverage. Heck, we were in field goal range. I have to be more careful," Keenum said. "The second one was just a really poor read by me. They rolled to a different coverage and I didn't see the corner. It's not an excuse. It's what lost us the football game."

The Browns took a break from punts to take control. Mayfield turned a double pump fake into a critical first down to former Colorado State star Rashard Higgins, who showed toe drag swag. Moments later, Mayfield rifled a short scoring strike to Antonio Callaway for a 17-13 lead with 11:41 remaining.

"I think the tough environment, playing on the road is the most important thing. Being able to win on the road is something that we need to start taking pride in," said Mayfield, who was 18-for-31 for 188 yards and two scores as Cleveland snapped an 11-game losing streak to the Broncos. "We found a way to win."

Then the Broncos marched down the field, and hesitated in a big spot. They became passive when needing a punch. Not being able to run the ball -- Phillip Lindsay had 24 yards on 14 carries as the team rushed for a season-low 32 yards -- deprived them of confidence.

A poor start left no margin for error.

Confusion reigned over the first six minutes. Did Broncos' Joseph say he wanted the team's "worst start?" I thought he said fast start. My bad.

The Broncos preached all week about the importance of a quick launch, and went three-and-out on the first two drives for minus-12 yards. As Keenum jogged to the sideline, boos cascaded down on him. The Broncos trailed 7-0, a victim of a 31-yard laser strike from Mayfield to Breshad Perriman. Keenum, urged to take more risks after not making mistakes or many plays over the last few weeks, engineered a 13-play, 88-yard march. He spread the ball around, went no-huddle, involved the tight end, and took matters into his own hands. From the 1-yard line, Keenum scampered and dived into the end zone, showing emotion missing since Sanders exited two weeks ago with a ruptured Achilles.

It was a kind of a big deal. The Broncos boasted three points in their previous four first quarters.

Keenum showed a willingness to trust more routes and more targets, using eight of the latter in the first half. The Broncos secured a 10-7 advantage on a 12-play drive. It included work from the tight ends in the passing game, not seen with any regularity since Jeff Heurmann. McManus nailed a 44-yarder to shove the Broncos ahead. The lead sprinkled pixie dust on the Broncos' pass rush.

Mayfield's initial lightning bolt sat in juxtaposition to the remainder of his half. He finished 7-for-18 for 106 yards and committed a silly turnover. With the score knotted at 10, the Browns received the ball at their 45 with 47 seconds left. Denver mismanaged the clock on a 27-second drive. After steering Cleveland to the 30-yard line, easily in field goal range, Mayfield threw carelessly to the end zone where Dymonte Thomas collected the pick. Thomas moved into the rotation after displacing Su'a Cravens on the depth chart. Cravens joined Shane Ray on the inactive list, with both potentially playing their last downs in Denver.

"We’re playing the best players," said Joseph on the decision to bench the pair. "We are trying to win a game."

Given the start, the Broncos embraced a tie at halftime with their playoff hopes flickering. They survived mistakes. Yet, they could not overcome their own timidity. In a game when they planned to let it loose, they became risk averse, leading to another loss.

"Our chances are gone. We have to keep fighting," said linebacker Bradley Chubb. "We have to come together as a team. That's what we've been doing all season, playing for the guy next to us."

Footnotes
Von Miller netted his 98th career sack, setting a new Broncos record. Simon Fletcher, attending the game, congratulated the All-Pro for breaking his record. ... Matt Paradis continues to make steady progress from his broken fibula. He is wearing a boot and using a scooter to get around. Paradis had three plates and multiple screws inserted into his fibula. He will be a coveted free agent this off-season. The Broncos will be in the mix. ... Shane Ray's future with the Broncos faded to black on Saturday as he was told Friday he would be inactive. Ray played through a wrist injury this season, but failed to gain traction after the Broncos declined to exercise his fifth-year option. Ray has one sack. Jeff Holland replaced him. The rookie played well in his debut, producing consistent pressure. ... New cornerback Jamar Taylor was ejected in the second half after throwing a punch at Perriman. ... Bradley Roby missed a large chunk of the game with a facial injury, but returned the bench in the fourth quarter.