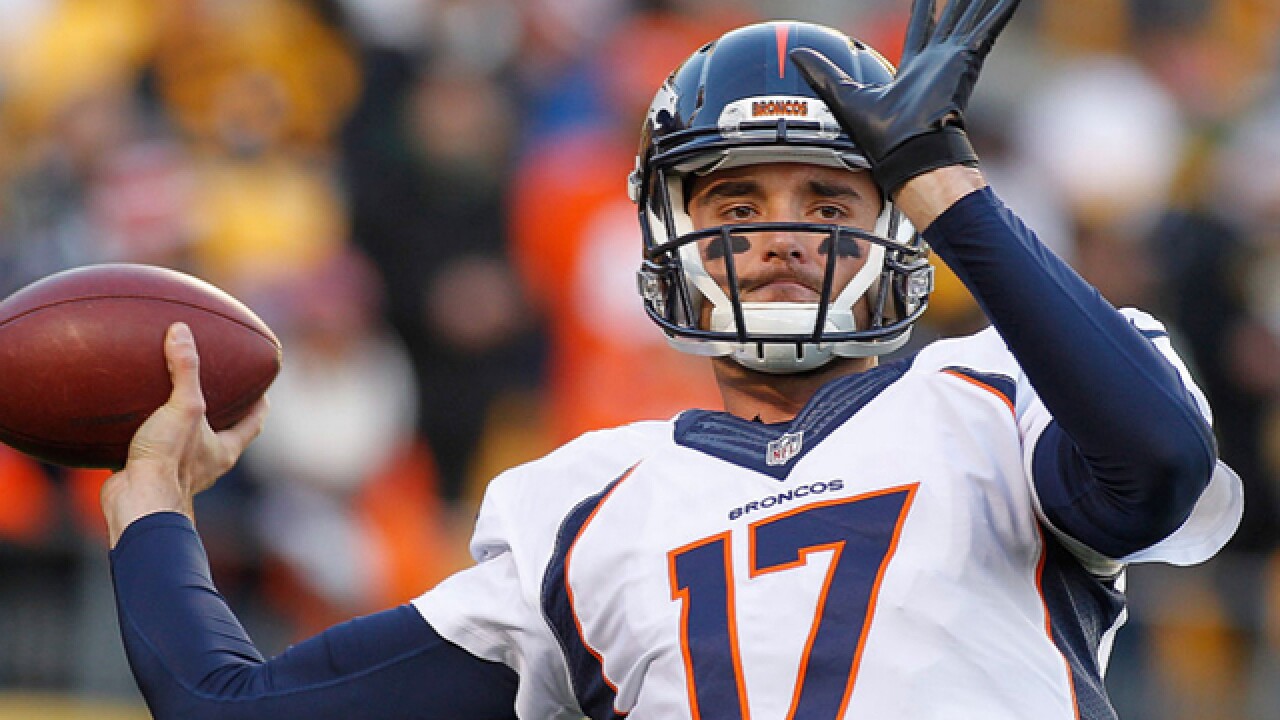 Justin K. Aller
<p>PITTSBURGH, PA - DECEMBER 20: Brock Osweiler #17 of the Denver Broncos warms up before the game against the Pittsburgh Steelers at Heinz Field on December 20, 2015 in Pittsburgh, Pennsylvania. (Photo by Justin Aller/Getty Images)</p>

It’s one of the most debated questions in Broncos Country.

No, for once this is not about Peyton Manning. His eventual decision on whether to retire has no impact on this subject.

Is Brock Osweiler a franchise quarterback? The follow-up question is just as debate-worthy: How much is he worth?

The actions of John Elway and the Denver Broncos up to this point indicate uncertainty about both questions. Since the Broncos won the Super Bowl, Elway has said all of the right things about Osweiler. Elway’s statements suggest that Osweiler is a top priority and is desired by the team for the long-term future.

If that’s the case, why didn’t Elway and the Broncos attempt to re-sign Osweiler last offseason? Or, why didn’t the team jump at it when No. 17 played pretty well this season? When, in both instances, they could have gotten him for much cheaper.

Answer: Because they still aren’t sure.

Elway has said he doesn’t think this is the time for Osweiler’s big contract. That shows you Denver wants Osweiler to prove himself some more before they throw absurd money at him.

There are signs he can do so, given his good start in the nine games he played this season. He was effective, had good command of the offense, was able to make a variety of throws and he won.

However, that’s not worth $20 million a season.

That’s not worth $15 million a season.

That’s not even worth $12 million a season.

For all of the good, there was just as much bad.

Osweiler holds onto the ball too long, which leads to a ton of hits. He’s not consistent, and as you saw in the most recent game he played, the offense has a tendency to turn the ball over. For all intents and purposes, he looked every bit the rookie he really was.

Still, Osweiler was 5-2 and a big reason why the Broncos got to the Super Bowl.

There’s still too much Elway and the Broncos don’t know at this point, which means they have to think about the team.

Denver still has the best defense in the NFL, and as it proved this season, you don’t need stellar quarterback play to win a Lombardi Trophy. So instead of throwing money at an unproven commodity who could weaken the strength of your team, you pivot. As Elway has shown over his tenure as the executive vice president and general manager, he’s the best in the NFL at doing that.

Two years ago, his team got annihilated in the Super Bowl despite having the best offense in the history of the NFL. So he pivoted by putting the focus on defense. Next, he fired his quitter of a head coach, hired a guy he trusts without question and won the Super Bowl.

Elway will do the same with Osweiler.

The huge paycheck that Kirk Cousins netted with the Washington football team or Sam Bradford with the Philadelphia Eagles has no bearing on Elway and what he does with Osweiler.

Elway has his figure in mind, and there is some wiggle room, but not a lot.

But rest assured, the current market will have an impact on Osweiler and his agent. After seeing Cousins and Bradford each get at least $18 million a season, why wouldn’t they want to find out what they could get?

Teams have shown over the last decade that they will overpay for a quarterback. The thought-process goes something like this: “It’s the most important position on the field. You can’t win without one.” So when a quarterback hits the open market in the NFL, it’s like vegetarians at a kale conference – they go berserk.

There’s no doubt if Osweiler hits the open market, some team will make it rain money for him.

Thus, he has a question to answer: Take the cash and play for a worse team, or take less money and play for a team that’s poised to win for the next five years?

If Osweiler goes the route of the Broncos and proves himself, Elway will then throw that crazy money at him.

If Osweiler goes the route of the money, his road to success becomes more difficult. There’s a reason this team desperately needs a quarterback. Of course, he may think he’s the last piece in the puzzle needed to bring success. Still, that’s a big gamble to take with so much unknown. Look no further than former Broncos quarterback Brady Quinn, who is now in TV.

The best path to success for Osweiler clearly starts with the team that just won a Super Bowl. There was obviously room for improvement at the quarterback position for Denver – why not use that as motivation? Why not tell yourself you can make the offense even better, and thus make that great defense even better? If you do that, you’ll get paid and become the face of the organization.

One aspect in all of this is clear: Elway will not overpay to keep Osweiler in Denver, no matter how badly he and the team want to keep him here.

Why would he? His team just won a Super Bowl when it didn’t get very much from the quarterback. So, as he’s proven to do, Elway will pivot and put that money into the defense and/or the offensive line. The last person you want to play poker with in the NFL is Elway.

If Osweiler hits the market, a team will throw money at him. A lot of money. But will he have to go against Manning for one of those teams? Another aspect to consider that most have not, and would make things really, really interesting.

The internal debate for Osweiler thus ensues: Take the money and a worse situation or less money and a better situation?

Oh, the joys of free agency in the NFL.

Ian St. Clair is Broncos contributor for Channel 7 and feature writer/editor for Mile High Report . Follow him on Twitter: @IanStClair .