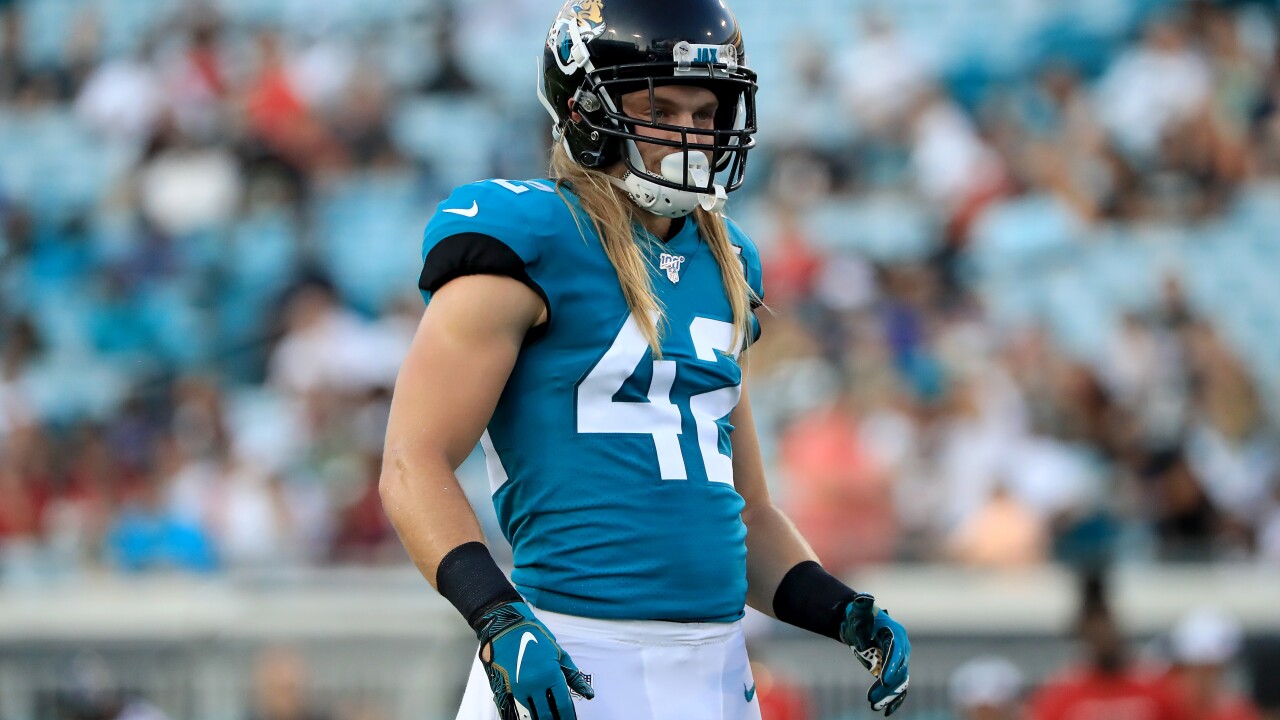 ENGLEWOOD, Colo. — The story is the kind of thing that makes you believe dreams should exist without expiration dates.

Andrew Wingard should have been too small, too slow to play in the NFL. He wrecked opponents at Ralston Valley High School and at Wyoming, who were his only Division I offer. But at 6-foot, 209 pounds, the safety did not profile for central casting.

But that's the thing about dreams. They don't require straight lines. And they need doubters as fuel. For Wingard, they served as nitromethane. He went undrafted — not a total surprise — but landed an invite to the Jacksonville Jaguars camp. This is where his plan began connecting dots. His former college coach Scott Hazelton had previously worked in Jacksonville before tutoring Wingard in Wyoming.

"They were still doing a lot of the same stuff here in Jacksonville," Wingard told Denver7 on Thursday. "It gave me a leg up."

Making a 53-man roster requires unwavering faith and determination, to say nothing of a niche. Wingard, a former Colorado Prep Player of the Year at Ralston Valley as a two-way star, became a lightning bolt on special teams. In a league that appears to be legislating out violence, Wingard plays with reckless abandon.

"It's just kind of how I am. I am not scared to put my body on the line to get a ball by hitting someone across the middle. It's how I live my life. I am not scared of many things," Wingard said. "When I got here I was able to show my versatility. A lot of people labeled me as a box safety at Wyoming who could only play the run. Blah, blah, blah, that wasn't true. I can play in the box, I can cover, and can run down on special teams. That's a great role and super fun."

Wingard talks with ease and joy about the game. And he's playing in arguably his biggest Sunday. He returns home to Denver to face the Broncos. He has never played at Empower Field at Mile High, but has driven by the stadium "hundreds of times and wondered what it would be like." Wingard purchased 22 tickets for his friends and family, including his grandfather, who is making the trip from Julesburg, Colo.

"It's going to be awesome. I can't tell you how many times I have thought of this day," said Wingard, who has played a handful of defensive snaps, but will be a core member on coverage teams. "To live out my dream in front of my family and friends, it's amazing."

Life has changed dramatically for Wingard over the past few months. He has picked up a few nicknames. Those who know him best call him "Dewey" — a young friend pronounced Drew as Dew and it stuck. Jaguars coach Doug Marrone calls him "Thor." Hey, whatever works.

"They call me 'Sunshine' as well (from the "Remember The Titans" character). There's been a lot," Wingard said. "It's all good."

For Wingard, he is living a dream on the field, and is something of a Hollywood extra off it. Remember the movie "Almost Famous"? Wingard might as well be aspiring journalist William Miller following Stillwater rock star Russell Hammond around the country. Why? Jaguars quarterback Gardner Minshew is one of his roommates. Three players share a three-bedroom apartment — "It's college style," Wingard said — and The Minshow plays out daily in their orbit.

I asked Minshew about Wingard earlier this week.

"That's my roommate. I played against him last year at Wyoming. He had like a million tackles in college. He's always around the ball. He's a guy that just looking at him, you're not going to be impressed," Minshew said. "You probably expect him to be at a Kid Rock show more than on a football field, but he's a ball player. He works hard and you can always count on him to be in the right spot."

I relayed that quote to Wingard. He laughed.

"He's awesome. He's saying I should be at a Kid Rock concert? Well, I could see him at a Led Zeppelin concert. That bandana, those glasses, the moustache, oh yeah, he's definitely a character. We have some characters in the room," Wingard said. "You look at him and you wouldn't think he's a big-time quarterback. He's not the biggest guy or strongest guy. He can throw the football. He slices and dices. That's what I tell people what it's like watching him. He's a gunslinger."

Hey, if the Minshew fits? Minshew has captured the NFL's attention. He spent a day earlier this week doing a piece with Uncle Rico from "Napoleon Dynamite." Wingard is enjoying the ride in the sidecar.

"It's been a crazy three weeks living in the same place. He's getting free stuff coming in left and right. And as roommates we have definitely benefited," Wingard said. "I think somebody made a new beer: Gardner Minsbrew (It's actually Minshew's Mafia). You look at his Instagram and every 10 minutes he gets like 50,000 new followers. It's been pretty crazy."

Then comes Sunday — and a reality that Wingard has been preparing for, it seems, his entire life. He will walk onto the field in front of family as an NFL player.