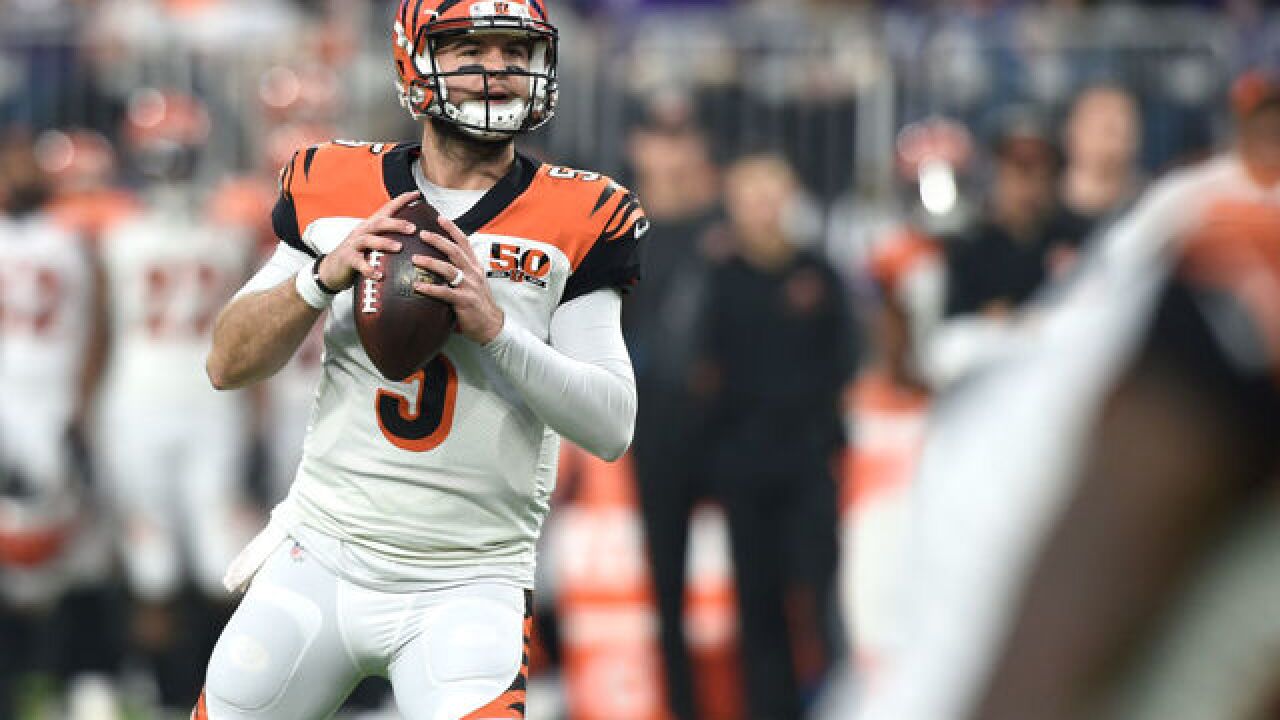 2017 Getty Images
Hannah Foslien
<p>MINNEAPOLIS, MN - DECEMBER 17: AJ McCarron #5 of the Cincinnati Bengals looks to pass the ball in the fourth quarter of the game against the Minnesota Vikings on December 17, 2017 at U.S. Bank Stadium in Minneapolis, Minnesota. (Photo by Hannah Foslien/Getty Images)</p>

Another quarterback joined the growing list of potential free agent candidates for the Broncos. A.J. McCarron won his arbitration case against the Cincinnati Bengals on Thursday, casting him as a free agent.

McCarron provides an interesting resume as a longtime qualified backup to Andy Dalton. However, according to NFL sources, he ranks behind Kirk Cousins and Case Keenum on the Broncos' wish list. The list remains fluid because there is no guarantee Denver will land Cousins, and Minnesota might keep Keenum.

That's why McCarron cannot be dismissed out of hand. He fits snugly in the category that includes Buffalo's Tyrod Taylor, Josh McCown, Teddy Bridgewater and Sam Bradford. McCarron, a fifth-round draft choice in 2014 out of Alabama, started three games in 2015, going 2-1. His loss came at Denver. He delivered a strong first half as the Bengals built a 14-3 lead, but struggled after halftime in wet conditions.

McCarron triumphed over the Bengals in his case, arguing that a shoulder injury suffered during his rookie season came during his time with the team, increasing his accrued service time. The Bengals could place the franchise tag on McCarron, but it is considered unlikely given the investment in Dalton. Cleveland attempted to acquire McCarron last season before a last-minute paperwork snafu snuffed out the deal.

The Broncos have identified finding a starting quarterback as their top priority. General Manager John Elway said bouncing back will remain difficult without significant improvement from the position.

Cousins continues to keep an open mind about his suitors. The Broncos represent a strong landing spot, but lack the salary cap room of the Browns and New York Jets. The Vikings are considered a darkhorse for Cousins if they move on from Keenum, Sam Bradford and Teddy Bridgewater.

Jimmy Garoppolo's five-year, $137.5 million contract with San Francisco figures to provide the floor for a Cousins deal. However, Cousins insists he wants to play for a contender, making it possible he would show flexibility with his cap number in the first two years of the contract. Keenum is considered a candidate for a deal similar to the one Brock Osweiler signed with Houston 23 months ago (four-year, $72 million, $37 million guaranteed).

Leverage exists for the Broncos.

They own the fifth overall pick in the draft, creating the possibility they select a quarterback from the group of Sam Darnold, Josh Rosen, Josh Allen and Baker Mayfield.