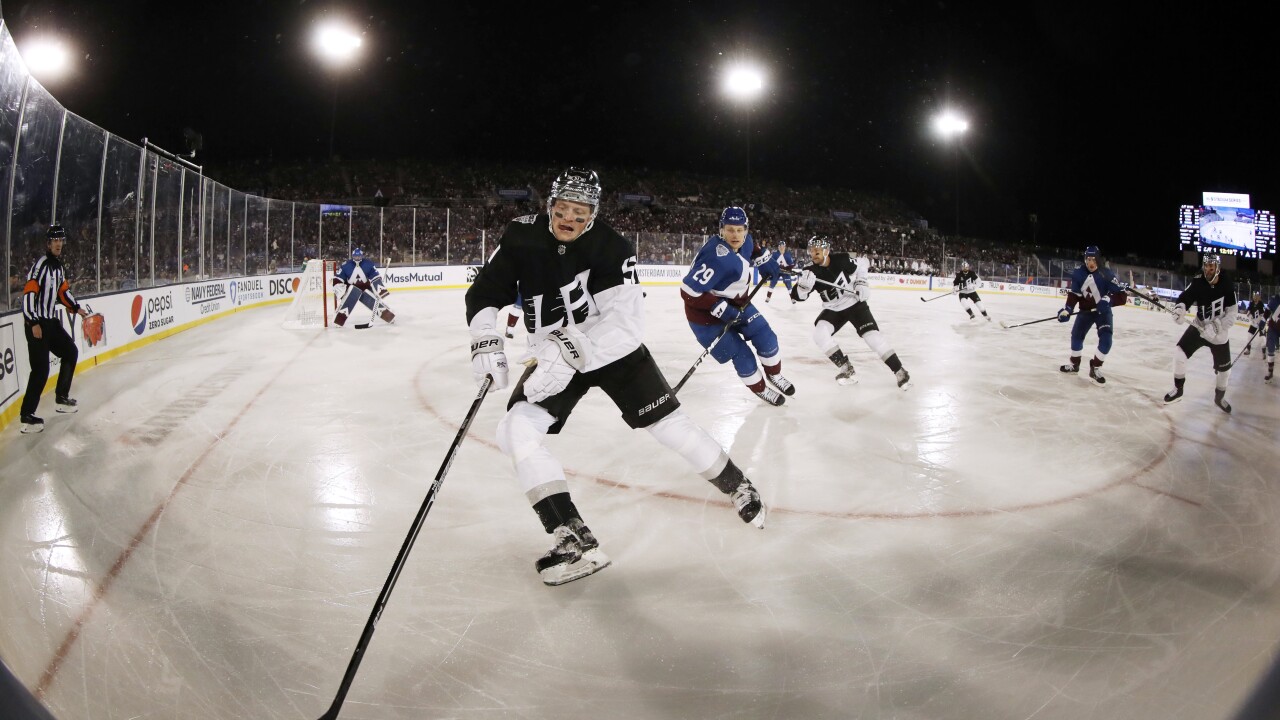 Toffoli put Los Angeles ahead 2-1 with 54 seconds remaining, then scored an empty-netter with 4.3 seconds left in the third and final outdoor game in the NHL this season.

The Kings won their second straight, improving to 4-12-1 since New Year's Day.

At 6,621 feet above sea level, this was the highest altitude ever for an NHL game. Unlike during the week when the rink was installed, the snow stayed away. It was 32 degrees with 66% humidity at puck drop with 6 mph winds. The temperature quickly dipped into the 20s.

Colorado goaltender Philipp Grubaurer stopped 14 of 15 shots before leaving after teammate Ian Cole slammed into him early in the third period and sent him tumbling. He was replaced by backup Pavel Francouz with 17 1/2 minutes remaining.

Los Angeles goaltender Jonathan Quick survived Colorado's 15-shot flurry in the first period, when the Kings took a 1-0 lead at Falcon Stadium, where an F-16 fighter jet highlighted the north end of the field and cadets sat on the south side of the rink on either side of a runway complete with synchronized red lights.

The Stadium Series game was a sellout — 43,574 fans, more than twice the capacity of the Pepsi Center some 60 miles north of the Air Force Academy.

Alex Iafallo tipped Joakim Ryan's shot, which went off the left post and slid across the crease where Toffoli tapped it in 14 minutes into the game.

Country singer Sam Hunt serenaded the crowd from a stage near the fighter jet after the first period.

Quick stopped the first two dozen shots he faced but he lost his stick in the final minute of the second period after two quick stops and while he was reaching for it, Samuel Girard sent the puck sailing over his right shoulder to tie it at 1.

NOTES: The NHL announced that the Carolina Hurricanes will host an outdoor game on Feb. 20, 2021, at Carter-Finley Stadium on the campus of N.C. State in Raleigh. ... This was the Avs' second outdoor game and the Kings' third. Los Angeles split its first two outdoor games, at Dodger Stadium in Los Angeles (3-0 loss to Anaheim) in 2014 and at Levi's Stadium in Santa Clara, California, in 2015 (2-1 win over San Jose). Colorado lost to the Detroit Red Wings at Coors Field in downtown Denver on Feb. 27, 2016. ... This was the league's 30th outdoor game. The other two this season were the Heritage Classic in Regina, Saskatchewan, on Oct. 26 (Jets 2, Flames 1) and the Winter Classic on New Year's Day at the Cotton Bowl in Dallas (Stars 4, Predators 2). ... This is the second outdoor game played at a service academy. Washington beat Toronto 5-2 at the Navy-Marine Crops Memorial Stadium in Annapolis, Maryland, on March 13, 2018. ... The Kings have just one more road game this month, at Winnipeg on Tuesday night.