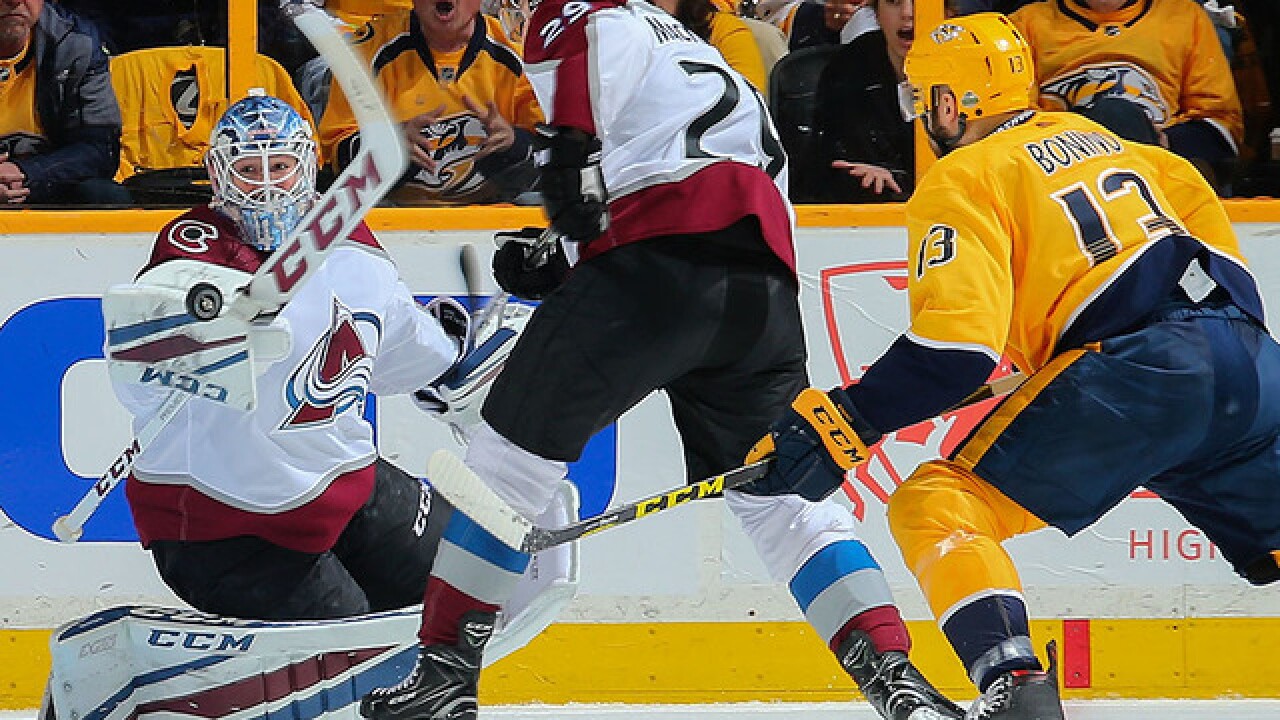 Copyright 2018 Scripps Media, Inc. All rights reserved. This material may not be published, broadcast, rewritten, or redistributed.
Frederick Breedon
<p>NASHVILLE, TN - APRIL 14: Goalie Jonathan Bernier #45 of the Colorado Avalanche makes a save on a shot by Nick Bonino #13 of the Nashville Predators during the first period in Game Two of the Western Conference First Round during the 2018 NHL Stanley Cup Playoffs at Bridgestone Arena on April 14, 2018 in Nashville, Tennessee. (Photo by Frederick Breedon/Getty Images)</p>

NASHVILLE, Tenn. (AP) — Ryan Hartman’s empty-net goal with 1:09 left wound up the game-winner as the Nashville Predators held off the Colorado Avalanche 5-4 Saturday for a 2-0 lead in their first-round Western Conference series.

Hartman’s goal gave the Predators a 5-3 lead until Alexander Kerfoot pulled Colorado within 5-4 with 35.8 seconds left. But the Avalanche couldn’t get another puck past goalie Pekka Rinne.

The Presidents’ Trophy winners started slowly, giving up a goal on Colorado’s first shot for a second straight game. Yet the Predators rallied again to take their first 2-0 lead when starting a best-of-seven series in their own building.

Kevin Fiala had a goal and an assist, and Viktor Arvidsson, Ryan Johansen and Austin Watson scored a goal apiece. P.K. Subban and Mattias Ekholm each had two assists for Nashville, which has won 12 straight over the Avalanche.

Rinne made 26 saves for the win.

Nathan MacKinnon had a goal and an assist, and Gabriel Bourque and Gabriel Landeskog each added a goal for Colorado.

Game 3 is Monday night in Denver.

Nashville struggled early yet again despite having country star Brad Paisley singing the national anthem and wrestler Jeff Jarrett revving up the fans before the game.

Bourque put Colorado up 1-0 on the Avs’ first shot 2:34 into the game after a turnover in the defensive zone by Hartman.

The Avalanche scratched rookie defenseman Samuel Girard and replaced him with Duncan Siemens after coming into the series with defenseman Erik Johnson already missing with a knee injury. The corps thinned when Tyson Barrie went to the locker room after being hit in the face by a puck that deflected off goalie Jonathan Bernier’s stick, but he returned later in the period.

Fiala tied it with 3 seconds left on Nashville’s first power play a minute into the second period. Fiala beat Bernier with a snap shot from the inside edge of the left circle, and that seemed to get the Predators going.

The Predators kept Colorado from taking a shot until Nathan MacKinnon put one on net at 9:48, and Rinne smothered that.

Arvidsson gave the Predators a 2-1 lead, skating up the right side and blasted a slap shot that went under Bernier’s right armfor an unassisted goal. In a 4-on-4 situation, Predators defenseman P.K. Subban blocked a shot by Barrie. Johansen got the puck on a breakaway and beat Bernier with a backhander.

MacKinnon pulled the Avs within 3-2 just 36 seconds later with his first goal this postseason.

Watson scored off a Colorado turnover in the Predators’ offensive zone in the third period for a 4-2 lead. But Nashville gave the Avalanche 1:46 of a 5-on-3 to rally, and MacKinnon’s shot deflected off Landeskog to pull Colorado within 4-3. The Predators killed the rest of the penalty, and Rinne made a big pad save on Sven Andrighetto just after the advantage ended.

Game 3 on Monday night in Denver.