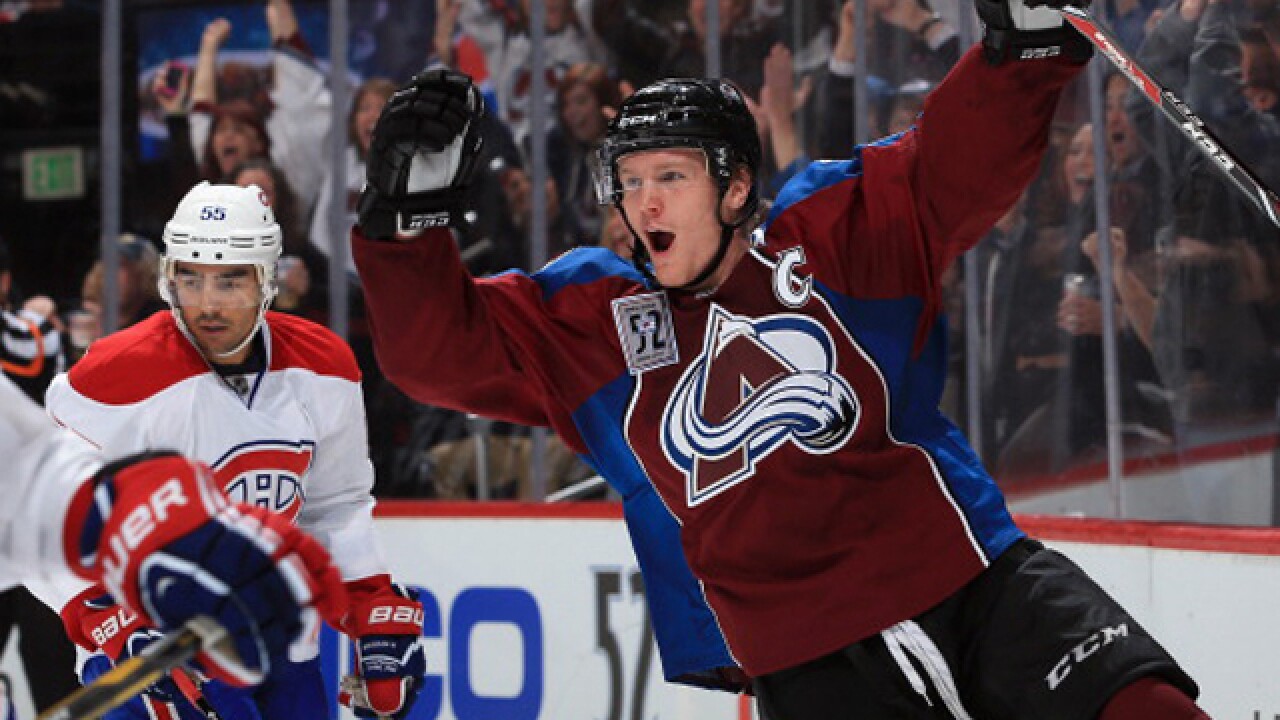 Copyright Getty Images
<p>Gabriel Landeskog #92 of the Colorado Avalanche celebrates his goal against the Montreal Canadiens to give the Avalanche a 1-0 lead in the second period at Pepsi Center on November 2, 2013 in Denver, Colorado.</p>

NASHVILLE, Tenn. (AP) — The moment the Predators have been waiting for since June 11 finally is here. After failing to force a Game 7 for the Stanley Cup, Nashville is back in the postseason eager to chase hockey’s ultimate prize once again.

This time, the Predators are the  Presidents’ Trophy winners  for their first-round series starting Thursday night at home against the Colorado Avalanche. Nashville forward Filip Forsberg sees the NHL’s best in the regular season as a better team than the group that made a thrilling run to the franchise’s first final as the lowest-seeded team in the playoffs.

“Everyone who was here last year is a year older, a year better, and all the guys that they brought in have been great additions and really created a big impact on this team.”

Winning the Presidents’ Trophy is no guarantee of success: Since 2004-05, more teams with the most regular-season points (four) have been eliminated in the first round than have reached the final (three). And Nashville’s own first-round sweep of Chicago, the Western Conference’s top seed last year, has given the Avalanche confidence after  their own amazing turnaround  for their first playoff berth since 2014, even if they have lost 10 straight to Nashville.

“We got in,” forward Nathan MacKinnon said. “Anything can happen now. We’re excited for the challenge. It’s not going to be easy against the Presidents’ (Trophy) winning team.”

“We’re disappointed obviously the way the thing ended last year,” Laviolette said. “We put ourselves in position to finish it off, and we didn’t get it done. We wanted to give ourselves the best position that we can through the course of the regular season in order to be successful, and we made it. We’re here.”

Some things to know about the Predators and Avalanche for this series:

The Avalanche have one of the youngest rosters with an average age of just 25.8. This season, they dressed 11 rookies. That youthful spirit has rejuvenated the veterans. “You can feel the excitement and energy from all those guys,” said 28-year-old center Colin Wilson, who spent his first eight seasons with Nashville. “It’s a fun energy to be a part of.”

Nobody spent more time in the penalty box than the undisciplined Predators, who led the NHL with 928 penalty minutes at an average of 11.3 minutes per game. They led the league with 320 minor penalties and 10 misconducts and tied San Jose with the most game misconducts (four). Laviolette said they have to be better. “It’s playoff time, and we have to be in control of our actions on the ice,” Laviolette said.

Colorado’s top line of captain Gabriel Landeskog, MacKinnon and Mikko Rantanen had a combined 243 points, which accounted for 36 percent of the team’s scoring in the regular season. The speedy MacKinnon led the way with 39 goals and 58 assists to put himself in the Hart Trophy discussion as for the league’s MVP. They’ll likely be matched against Nashville’s top line of Forsberg, who led Nashville with 64 points, center Ryan Johansen (54) and Viktor Arvidsson (61). “We’re always OK with best-best,” Laviolette said.

The Predators have a big advantage in  Pekka Rinne  , a three-time Vezina Trophy finalist who could finally win the award after a career-high eight shutouts and 42 wins this season. Rinne played a huge role in Nashville’s playoff run last spring. Colorado will be without Semyon Varlamov this series because of a knee injury, putting Jonathan Bernier in net. Bernier went 19-13-0 for Colorado with two shutouts, but this will be just his second career playoff start. His first? A  6-3 loss to Nashville as the Predators  clinched the Western Conference title against Anaheim last spring.

AJ Mleczko, who won Olympic gold with the U.S. women’s hockey team in 1998 and silver in 2002, will be the color analyst for this game on NBCSN. The network believes this will be the first time a woman has been in the booth for an NHL playoff game in the U.S. Mleczko, who worked broadcasts for the 2018 Winter Olympics, started doing analysis on  men’s hockey with NBC’s national broadcast March 6.