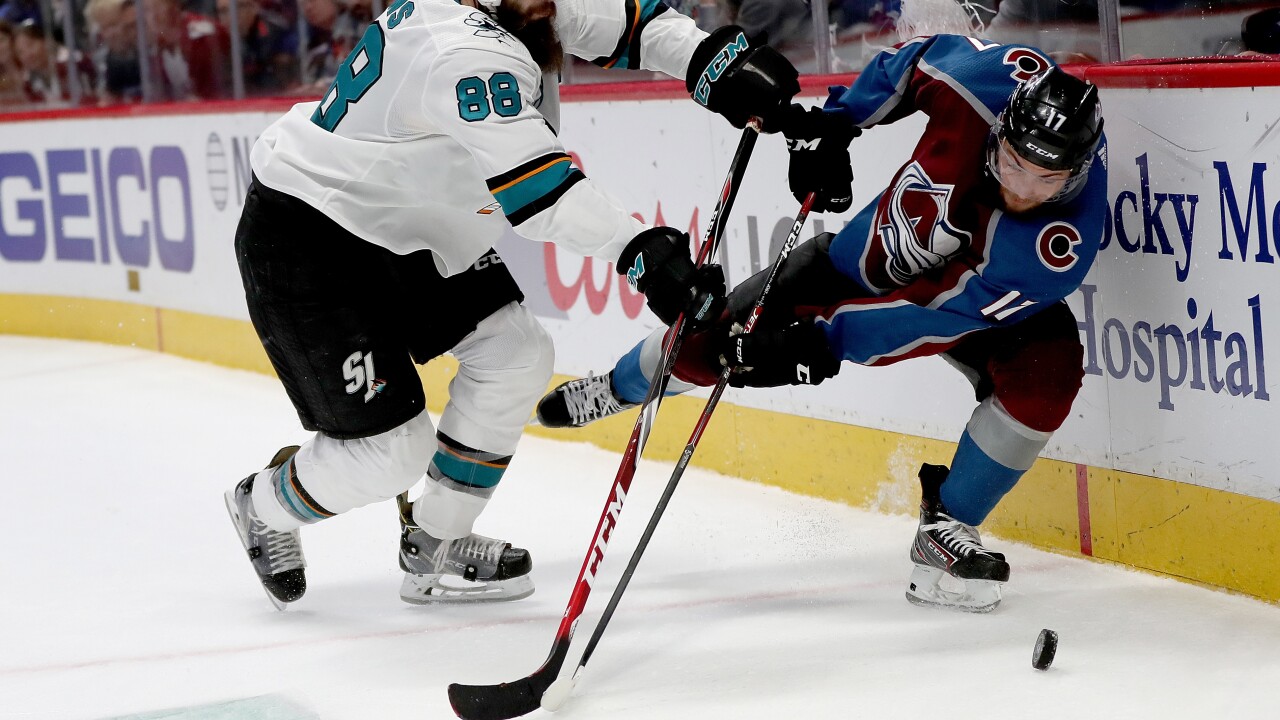 Matthew Stockman/Getty Images
DENVER, COLORADO - MAY 06: Brent Burns #88 of the San Jose Sharks fights for the puck against Tyson Jost #17 of the Colorado Avalanche in the second period during Game Six of the Western Conference Second Round during the 2019 NHL Stanley Cup Playoffs at the Pepsi Center on May 6, 2019 in Denver, Colorado. (Photo by Matthew Stockman/Getty Images)

SAN JOSE, Calif. (AP) — Captain Joe Pavelski made a triumphant return from a gruesome head injury by posting a goal and an assist in the first period that helped send the San Jose Sharks into the Western Conference final with a 3-2 victory over the Colorado Avalanche in Game 7 on Wednesday night.

Just over two weeks after being helped off the ice while bleeding from his head in a Game 7 win in the first round against Vegas, Pavelski inspired the crowd and carried his team to another Game 7 victory. He scored the first goal and assisted on Tomas Hertl's goal as the Sharks advanced to their fourth conference final this decade.

Joonas Donskoi ended a 39-game goal drought, Martin Jones made 14 of his 27 saves in the third period and the Sharks capitalized on a favorable replay review that negated a potential game-tying goal by Colorado in the second period.

Mikko Rantanen and Tyson Jost scored for the Avalanche, who were trying to make their first conference final since 2002. Philipp Grubauer made 24 saves.

The excitement started early at the Shark Tank with the fans cheering loudly when Pavelski stepped out for warmups for his first game back since his bloody concussion in Game 7 of the first round against Vegas.

There was a deafening roar when Pavelski was announced as a starter and the entire first period became a lovefest for San Jose's captain in what could be his final home game with the Sharks before he can be a free agent this summer.

Pavelski took less than six minutes to provide more than just inspiration. He deflected Brent Burns' point shot past Grubauer for the opening goal of the game and celebrated with an exaggerated fist pump. Pavelski tipped the puck from almost the exact same spot in the faceoff circle where he was knocked out and bleeding from his head after the awkward fall on April 23 against the Golden Knights.

That play led to a major penalty that the Sharks converted into four power-play goals to erase a 3-0 deficit and help carry San Jose into the second round where his teammates vowed to extend the season long enough for Pavelski to return.

Pavelski then set up Hertl with a pass from behind the net to make it 2-0 midway through the period and drew a penalty that nearly led to a power-play goal later in the period as the Avalanche struggled early.

Colorado lost star Nathan MacKinnon early in the first when his shoulder crashed into the boards, but his return late in the period helped spark the Avalanche. He created a couple of scoring chances and Colorado then converted with MacKinnon on the ice in the closing seconds of the period when Rantanen deflected a point shot from Samuel Girard with 6.8 seconds remaining in the first.

The Avalanche appeared to tie the game midway through the second when MacKinnon set up Colin Wilson, but Sharks coach Peter DeBoer challenged the play for offside. The play was overturned because captain Gabriel Landeskog was still in the zone as he went off the ice on a line change.

The Sharks then restored the two-goal lead later in the period when Donskoi skated around the net and beat Grubauer high to the short side for his first goal since Jan. 10.

Colorado pushed hard in the third, getting a goal in the first minute from Jost, but the Sharks managed to hold on from there for the win.

NOTES: The Sharks won multiple Game 7s in the same postseason for the first time in franchise history. The last team to advance to the conference finals with two Game 7 wins was St. Louis in 2016. The Blues were eliminated by the Sharks. ... Colorado F Matt Calvert remained sidelined with an upper-body injury. The Avalanche once again dressed seven defensemen and 11 forwards.