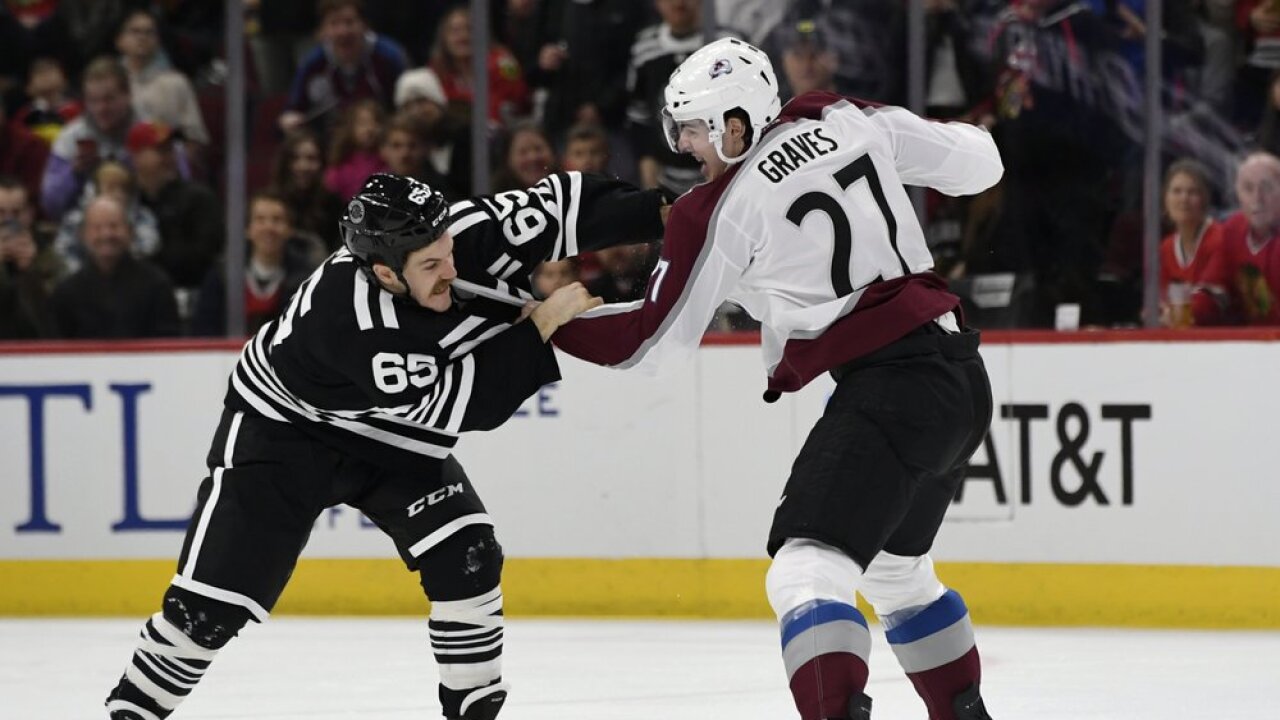 CHICAGO (AP) — Nathan MacKinnon had a goal and three assists, and the Colorado Avalanche beat the Chicago Blackhawks 5-2 on Friday.

J.T. Compher added a goal and two assists, and Cale Makar, Ryan Graves and Valeri Nichushkin also scored as Colorado started fast against listless Chicago in the first of a home-and-home set.

Patrick Kane and Zack Smith connected for the Blackhawks, who have lost four of five (1-3-1). Chicago defenseman Duncan Keith left with a groin injury midway through the second period after logging 9:30 of ice time.

Pavel Francouz made 34 saves. The Avalanche scored on three of their first seven shots against Corey Crawford, who blocked 18 for the game.

MacKinnon posted his third four-point game of the season and continued to come through offensively for injury-depleted Colorado. The 24-year-old center has five goals and eight assists in a six-game points streak, and he leads the Avalanche with 16 goals and 23 assists in 25 games.

Kane extended his points streak to 14 games, with 10 goals and 13 assists during the run.

Makar, a 21-year-old defenseman, leads all rookies with 26 points in 25 games.

The Avalanche led 3-1 after one period as the Blackhawks came out flat.

MacKinnon opened the scoring on a deflection just 59 seconds in following a brutal Chicago turnover.

Kane’s soft pass off the backboards was intended for Keith, but instead drifted onto the stick of Compher, who fired from the left circle. MacKinnon, standing in front, got a piece of it.

Graves made it 2-0 at 3:17 from the left circle when he converted a rebound of Matt Nieto’s shot from the right point.

Smith cut it to 2-1 at 9:14 from the edge of the crease after Ryan Carpenter fed him with a backhand pass off the backboards.

Makar’s power-play goal, with 7:40 left in the first — and just 11 seconds after Erik Gustafsson went off for interference — made it 3-1. Makar threaded a screened shot from the high slot into the upper right corner.

Nichushskin blew past Keith in the slot, broke in alone and beat Crawford with a backhander at 9:45 of the second to make it 4-1. Set up by MacKinnon, Compher ripped a shot past Crawford from the right circle 1:41 later to complete a 3-on-1 break and extend the Avs’ lead to 5-1.

Kane, alone in front, lifted in a backhander with 4 seconds left in the second. After taking a feed from Jonathan Toews, Kane notched his team-leading 13th goal with Francouz sprawled on the ice.

NOTES: Chicago C Dylan Strome missed his second game under the concussion protocol. ... Avalanche LW Andre Burakovsky didn’t play after sustaining an upper-body injury on Wednesday against Edmonton. ... Colorado D Erik Johnson (upper body) sat out his second game after being cross-checked into the boards Saturday by Toronto and former Avs F Alex Kerfoot. Kerfoot was assessed a two-game suspension by the NHL on Monday for the hit. ... Colorado coach Jared Bednar said All-Star RW Mikko Rantanen, who has missed 16 games with a lower-body injury, is close to returning and could play Saturday against the Blackhawks in Denver. ... Avs LW Gabriel Landeskog (lower body) missed his 14th game on Friday, but has resumed skating. Bednar said Landeskog could join the team for a three-game trip next week. ... Compher, from nearby Northbrook, Illinois, has five goals and three assists in 11 games against the Blackhawks.