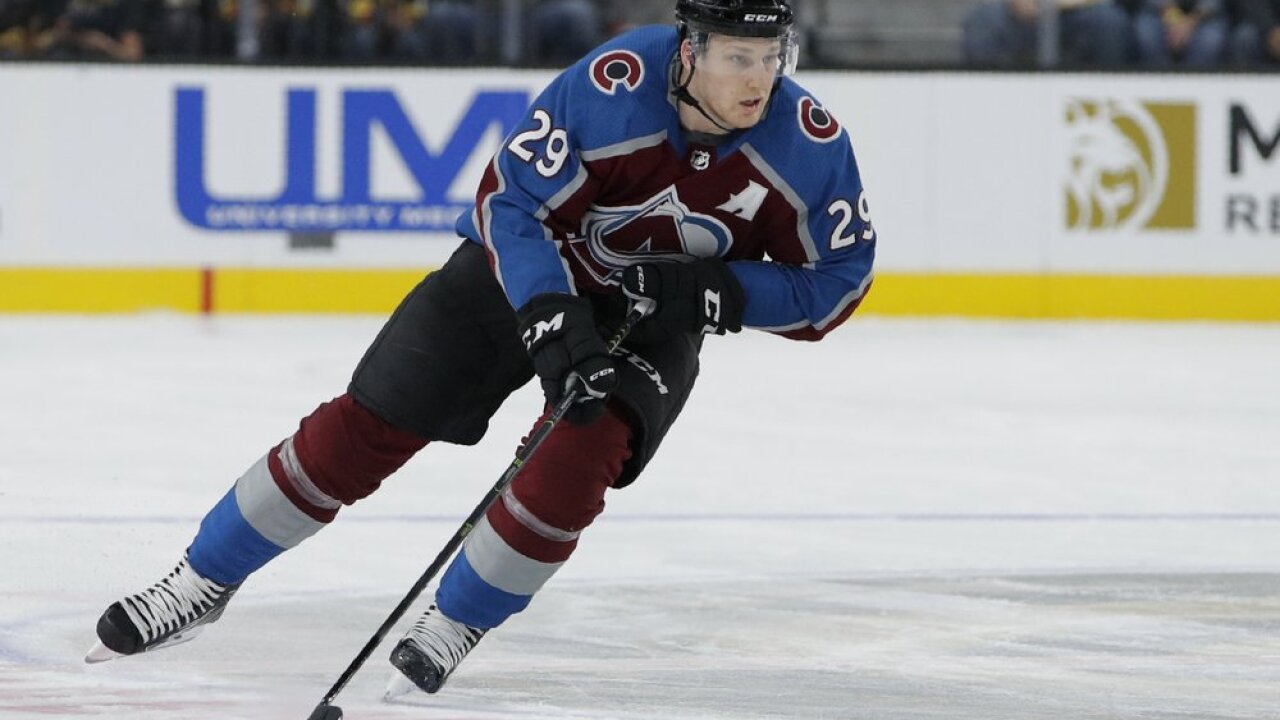 LAS VEGAS (AP) — Nazem Kadri and Matt Calvert each scored twice, Pierre-Edouard Bellemare had a goal and two assists against his former team and the Colorado Avalanche beat the Vegas Golden Knights 6-1 on Friday.

Cale Makar also scored for the Avalanche, who improved to 8-1-1.

In a matinee on the Las Vegas Strip on the observance of Nevada Day, it was more like Colorado day. The Avalanche closed out an impressive six-game road trip with a 4-1-1 record in Bellemare’s first game against his former team since signing with the Avalanche in the summer.

Colorado, which has scored at least one goal in 23 of its 30 regulation periods, dominated Vegas from the drop, sparked by Bellemare’s goal 28 seconds into the game.

Vegas’ former fourth-line center intercepted Mark Stone’s cross-ice pass, skated around Deryk Engelland and sent a shot past Marc-Andre Fleury to give the Avalanche a 1-0 lead.

Karlsson tied the game for Vegas late in the late first period, but it was the only goal allowed by Colorado goaltender Phillip Grubauer, who finished with 25 saves. Vegas’ 26 shots on goal were its second-lowest this season.

Fleury was replaced by Garret Sparks with 7:24 left in the second period after allowing four goals and making just 22 saves. Sparks, who won 14 of his 37 career appearances with Toronto, allowed two goals and made 13 saves in his first appearance with Vegas since being acquired from the Maple Leafs in July.

After Kadri made it 2-1 just before the end of the first period, Makar extended Colorado’s lead to two with his first NHL goal.

Kadri netted his second goal of the game when Nathan MacKinnon moved past Cody Eakin at the top of the circle and sent a perfect pass into the slot. Kadri’s one-timer got past Fleury on the blocker side and essentially ended his night.

Bellemare led a 2-on-1 break and dished to Calvert, who skated in and beat Sparks high on the glove side to give the Avalanche a 5-1 lead. Calvert scored his second goal late in the third period, a short-hander also assisted by Bellemare.

NOTES: A video tribute for Bellemare was played during the first period, drawing a standing ovation from the sellout crowd. ... Makar leads all NHL rookies in assists (8) and is tied for first with Buffalo’s Victor Olofsson with nine points.

Vegas: Hosts the Anaheim Ducks on Sunday in the second of a four-game homestand.