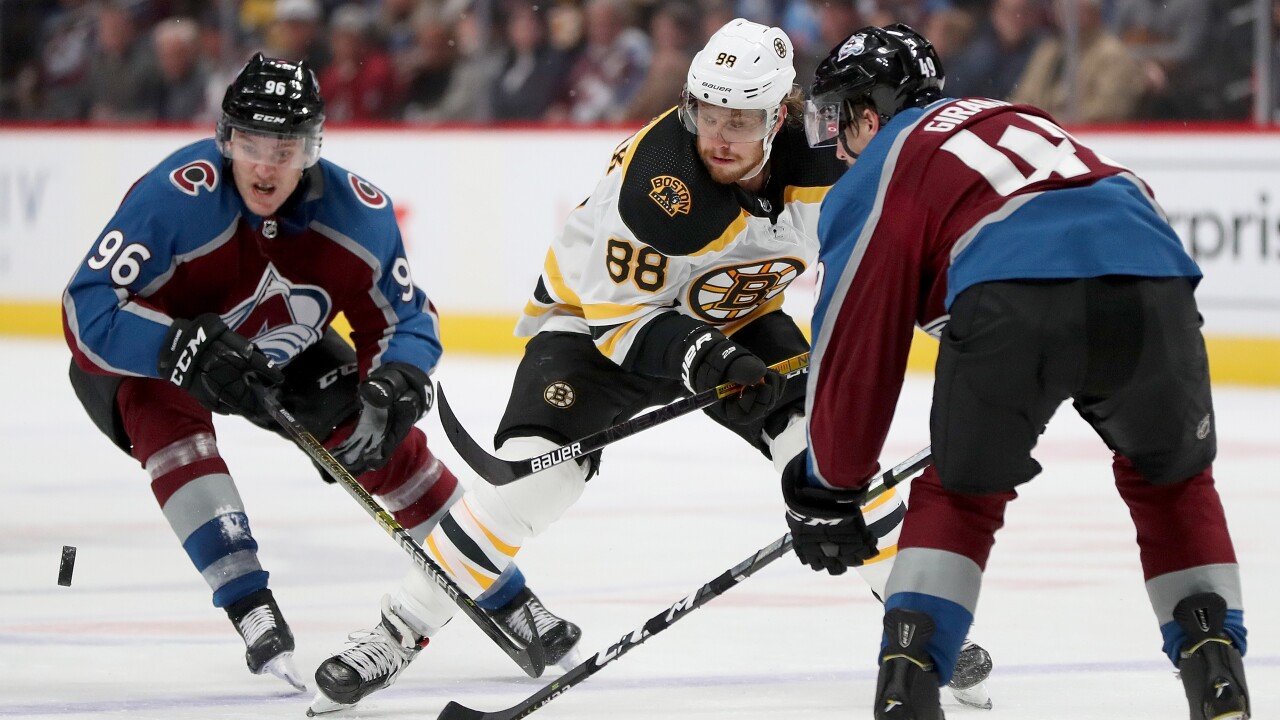 DENVER (AP) — Andre Burakovsky scored the go-ahead goal with 7:06 remaining, Boston had two goals disallowed after video reviews, and the unbeaten Colorado Avalanche handed the Bruins their first loss of the season with a 4-2 victory on Thursday night.

Gabriel Landeskog added an empty-net goal with 1:01 remaining for the Avalanche, who are off to a 3-0 start for just the second time since relocating to Denver from Quebec in 1995. The 2013-14 club opened the season 6-0.

Pierre-Edouard Bellemare and Nathan MacKinnon also had goals for Colorado and Philipp Grubauer made 39 saves.

David Pastrnak and Zdeno Chara had goals for the Bruins.

Burakovsky, acquired last June in a trade with the Washington Capitals, scored his first goal as a member of the Avalanche. From the top of the left circle, Burakovsky banged in a shot off the post for the game-winner, falling on his backside an instant after the shot as he took a hit from a defender.

Boston had appeared to take a 3-1 lead on a goal by Karson Kuhlman at 1:50 of the second period, but it was negated after Avalanche coach Jared Bednar's challenge was upheld. Officials rescinded the goal after a video review determined David Krejci interfered with Grubauer as he jostled with a defender in front of the net.

The Bruins had an apparent tiebreaking power-play goal by Jake DeBrusk negated in the opening seconds of the third period, again when a challenge by Bednar was upheld on a video review that showed Pastrnak was narrowly offside on the play.

Boston took a 2-0 lead on first-period goals by Pastrnak and Chara, who scored on a slap shot from just inside the blue line.

Colorado got on the board with a power-play score by MacKinnon. Gabriel Landeskog split defenders while leading a rush into the Boston zone and let fly a shot that Jaroslav Halak turned away. But MacKinnon knocked in the rebound from up close.

The Avalanche evened the score at 2 on a goal by Bellemare at 9:43 of the second.

NOTES: Brad Marchand is one assist shy of the 300th of his career. ... Boston's four-game road trip to start the season was its longest since opening the 2008-09 campaign with a four-game trip. ... Cale Makar registered an assist on MacKinnon's goal, becoming the third defenseman in the Avalanche's franchise history to have points in each of their first three career regular-season games.

Avalanche: Host Arizona on Saturday night to wrap up a season-opening four-game homestand.