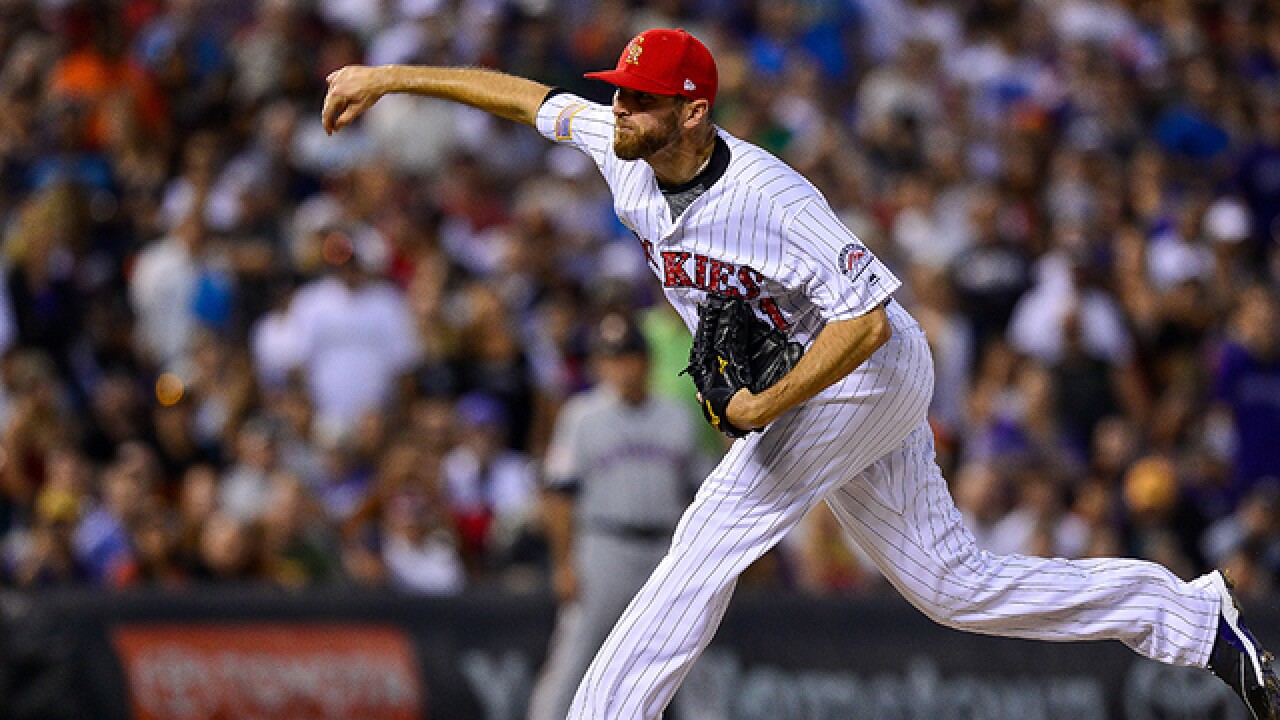 Copyright 2018 Scripps Media, Inc. All rights reserved. This material may not be published, broadcast, rewritten, or redistributed.
Dustin Bradford
<p>DENVER, CO - JULY 4: Wade Davis #71 of the Colorado Rockies pitches against the San Francisco Giants in the ninth inning of a game at Coors Field on July 4, 2018 in Denver, Colorado. (Photo by Dustin Bradford/Getty Images)</p>

DENVER (AP) — The stat caught Chris Iannetta by complete surprise: This was only the 10th 1-0 game ever at Coors Field.

“Come on,” the catcher said.

He can thank his dominant starter for the latest addition. He played a pretty big role, too.

Anderson (6-3) scattered two hits and tied a season high with nine strikeouts. The left-hander didn’t allow a baserunner to reach second base.

For that, Anderson credits a slight tweak in game plans, going with more cutters than changeups.

“It was helpful because I’ve faced those guys a lot,” Anderson said. “If they want to sit on a changeup, it kind of helps to have something to equalize that.”

And of course, Anderson wanted the ball for the ninth.

“You always want to go out and finish it,” Anderson said. “At the same time, Wade Davis is an unbelievable pitcher.”

Davis surrendered a two-out single to Andrew McCutchen and walked Buster Posey in the ninth. Pinch-hitter Brandon Crawford hit a deep foul ball before later flying out as Davis earned his 25th save.

“A pitcher’s duel is always fun,” Suarez said. “I enjoyed it, just that last inning I missed that one pitch.”

Suarez elevated a slider on a full count to Iannetta, who took a few steps down the line to make sure his hooking liner remained fair.

It did. The umpiring crew took a look and confirmed Iannetta’s seventh homer of the season.

Kelby Tomlinson and Brandon Belt both singled to account for the only Giants hits off Anderson. Over the three-game series, San Francisco mustered just three runs and hit a combined .152.

“It’s a tough one, the whole series,” Giants manager Bruce Bochy said. “We’ve got to rebound here, get the bats going.”

This was another strong outing for Anderson, who allowed four hits and no runs over eight innings in Los Angeles against the Dodgers last Friday.

He found a way to top it.

“He was good both times. He had command of four pitches,” Iannetta said. “He was using all four quadrants of the zone. That’s really a difference maker. When you can command pitches, it makes it tough for hitters to get in a groove.”

Colorado had something brewing in the third, when DJ LeMahieu lined a one-out double to right. Charlie Blackmon followed with a sharp single off the glove of Joe Panik, who hustled after the baseball as LeMahieu took a wide turn. LeMahieu held at third and Suarez got the next two outs to escape the jam.

Nolan Arenado leads the NL with 22 homers this season. And to think, he thought he might not even hit one out this season.

“The first month-and-a-half, felt like I wasn’t going to hit any homers this year,” Arenado said. “Now I have 22. You have to ride the wave.”

Tomlinson was recalled from Triple-A Sacramento and started at third base. ... Colorado snapped a four-game skid on the Fourth of July. ... Of Colorado’s three 1-0 wins on solo homers, Iannetta has the last two, according to the team. He also accomplished the feat on July 18, 2010, at Cincinnati. ... The game lasted just 2 hours, 15 minutes — the shortest at Coors Field this season.

Giants: Begin a four-game series against St. Louis on Thursday, with Johnny Cueto (3-0, 0.84 ERA) expected to return to the mound. Cueto was placed on the disabled list May 1 — retroactive to April 29 — with inflammation in his right elbow. A few days later he visited Dr. James Andrews, who diagnosed him with a strained elbow.

Rockies: Off Thursday before playing a three-game series in Seattle. RHP German Marquez (6-8, 5.14) will throw for the Rockies on Friday, while the Mariners go with RHP Felix Hernandez (8-6, 5.11).