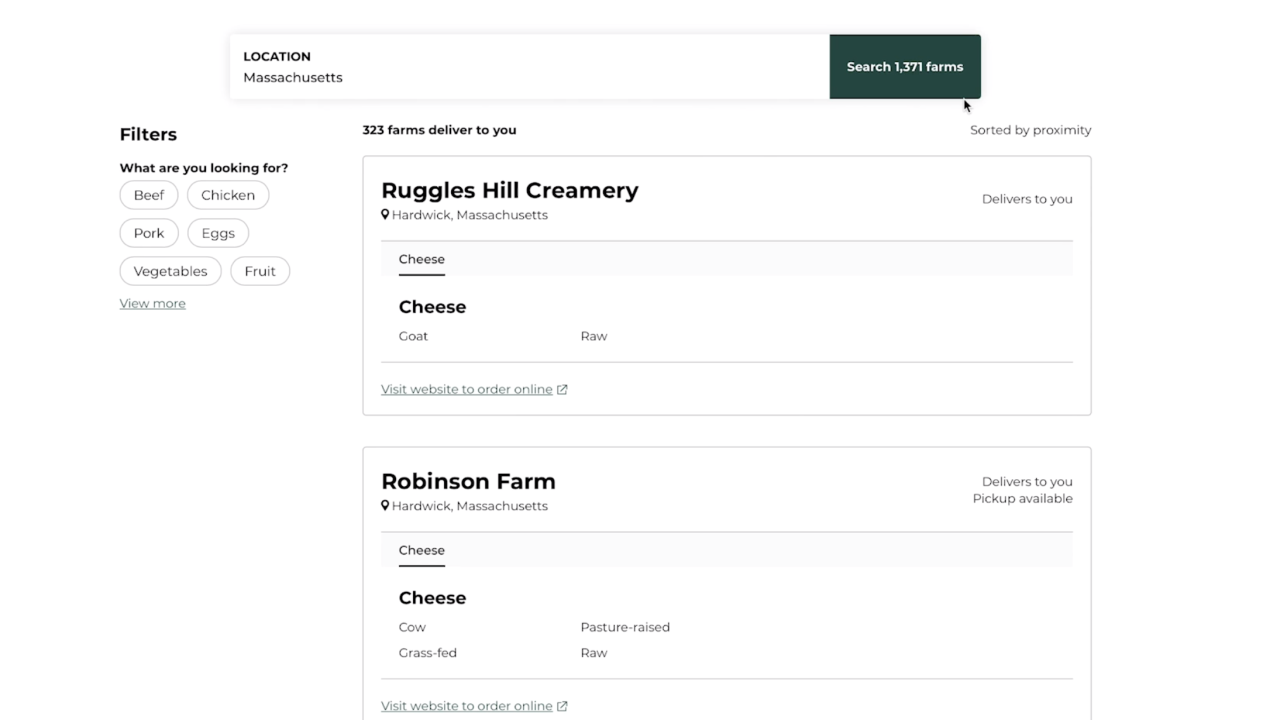 She walks up and down the aisles of the walk-in refrigerator, her eyes scanning the massive wheels of cheese that have been sitting here for years aging to the point of perfecting. Then, Pam Robinson pulls out the block of Swiss cheese she’s been looking for.

The temperature inside this cheese cave never changes; it’s a constant 55 degrees to ensure the dozens of wheels of cheese sitting on the wooden shelves here can age slowly over time. It’s an art Pam Robinson and her husband, Raymond, have been perfecting for the last decade.

“When you’re making cheese, you smell the sugar from the cheese as it’s being stirred. It’s mesmerizing, almost calming in a way,” she said as she places a block of cheese on a scale to weigh.

Pam and Ray Robinson are fourth-generation farmers. Ray Robinson’s great-grandparents started Robinson Farm more than a century ago. The centerpiece for this farm in Hardswick, Massachusetts, is an iconic red barn that sits in the center of the property. It’s surrounded by woods and open fields where about two dozen cows spend their days grazing on grass.

For the last 10 years, the Robinsons made most of their money, selling cheese to high-end restaurants in the Boston area. But once COVID-19 hit, that stream of revenue disappeared overnight.

“Our distributor has not ordered a wheel of cheese since March, and it’s now September,” Pam Robinson explained.

Like farmers across the country who sell their products directly to restaurants, the Robinsons found themselves having to suddenly pivot their entire business model. Almost as soon as restaurants closed in March, Pam Robinson noticed an incredible increase in the number of individual online orders they were receiving.

Demand for delivery of the gourmet cheese this farm produces has skyrocketed in recent months. Online sales have doubled as the Robinsons have seen more Americans looking to get their food directly from local farms because of COVID-19. Many customers are also still unable to leave their homes because of health concerns.

Finding farms that deliver like the Robinsons though can sometimes be difficult, which is why a new website has gained popularity during the pandemic.

David Pham and Jason Curescu are two guys in their 30s who live in New York City and started the website Farmsthataredelivering.com. They've spent months creating a free online database where people can search for farms in their area that deliver.

“By going back to our food source, that’s how we can really know what’s in our food,” Pham said.

The idea has taken off. Not just with Americans ordering food, but with the farmers themselves.

“A lot of the farmers we talk to this is the part of the job they don’t like,” he added.

It's the kind of boost farms could use now more than ever. In a recent survey, 73 percent of farmers said COVID-19 affected their operations in some way. Thirty-four percent of dairy farmers said the pandemic is forcing them to speed up plans to leave farming altogether, which includes the Robinsons, who have decided it's time to sell the family farm.

“It’s hard to let it go, but it’s time,” said Pam Robinson, while looking at the land she’s lived on most of her life.

But for now, they still have plenty of cheese that's ready to be packaged and shipped. And if the pandemic has taught them anything, it’s how grateful people are that they can get food directly from the farm.