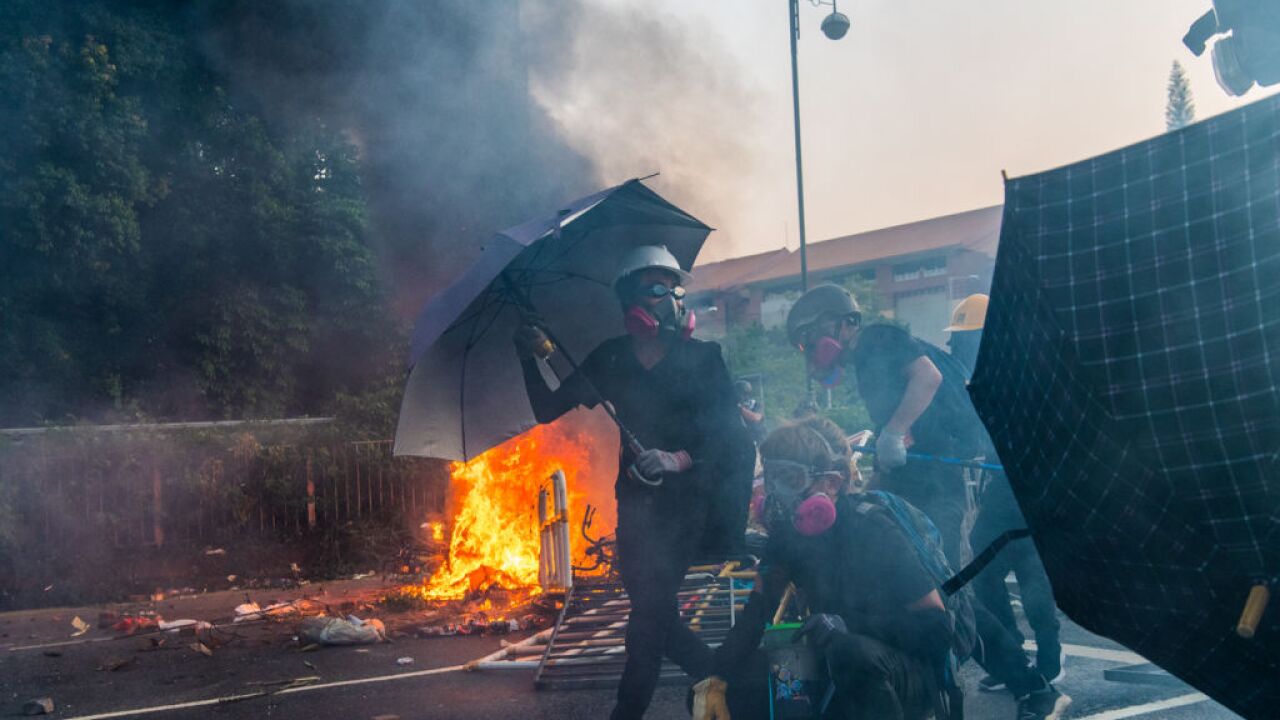 A man was shot with a live round as violent protests erupted across Hong Kong on the 70th anniversary of the People's Republic of China on Tuesday, in one of the most chaotic days of almost four months of political unrest.

The live round was fired by police in the Tsuen Wan district in the New Territories, a police source told CNN, marking a major escalation in violence that could galvanize the protests further.

While it is not the first time police have fired live warning shots, it is the first injury resulting from one since the protests began 17 weeks ago.

It is not known whether the man was a protester, although there were clashes between police and demonstrators in the area on Tuesday. The man's condition is not known, and CNN has approached police for an official statement.

Hong Kong's Hospital Authority said one man was in critical condition in the city's Princess Margaret Hospital but would not comment on the type of injuries and would not provide any further information.

A total of 15 people had been hospitalized as of 5 p.m. local time (5 a.m ET), according to a Hospital Authority spokesperson. Two people were discharged, and the other 12 injured are in stable condition.

Clashes across the city

Police and demonstrators clashed in at least six districts on Tuesday, with wildcat protests bringing chaos and disruption to neighborhoods on Hong Kong Island, Kowloon and the New Territories.

Protesters charged at police, threw petrol bombs and built barricades across roads, while officers fired blue dye from a water cannon, multiple rounds of tear gas and rubber bullets. Police also made multiple arrests as the day went on.

Authorities closed more than a dozen subway stations, as well as the entire Tsuen Wan line, which runs from Hong Kong Island to the northwestern New Territories.

A large blaze was seen in Wong Tai Sin in Kowloon, where a line of motorbikes caught fire. In Tsim Sha Tsui district, large numbers of protesters wearing black faced off with riot police. Trash cans were set on fire and placed in front of the closed subway station, and police responded by firing more than 20 rounds of tear gas.

The protests first started in June over a controversial bill that would have allowed extradition to mainland China. The bill has since been withdrawn -- one of the protesters' five major demands -- but many remain unsatisfied and have vowed to continue until all demands are met.

Tuesday's escalation in violence came as China celebrated 70 years since the founding of the People's Republic. Chinese President Xi Jinping presided over National Day celebrations in Beijing including a massive military parade showing off the latest in the country's advanced weaponry.

In a pointed speech from Tiananmen Square, where Mao Zedong declared the founding of the PRC on October 1, 1949, Xi said that China must remain "committed to the strategy of peaceful reinforcement of one country two systems," the framework that governs Hong Kong.

For months, people in Hong Kong have speculated that October 1 could be a deadline for Beijing to take action to end the ongoing protests.

The anniversary is a significant milestone, and China's leaders will not want it overshadowed. Beijing officials have hinted at the possible deployment of troops in Hong Kong, and Chinese paramilitary police have recently held large drills in the bordering city of Shenzhen.

The Hong Kong government has said there is no such deadline for action. In audio leaked to Reuters in early September, Hong Kong Chief Executive Carrie Lam can be heard reassuring business leaders that "they and ourselves have no expectations that we could clear up this thing before the 1st of October."