The Pine Gulch Fire got hot enough to produce lightning. Here's how that works 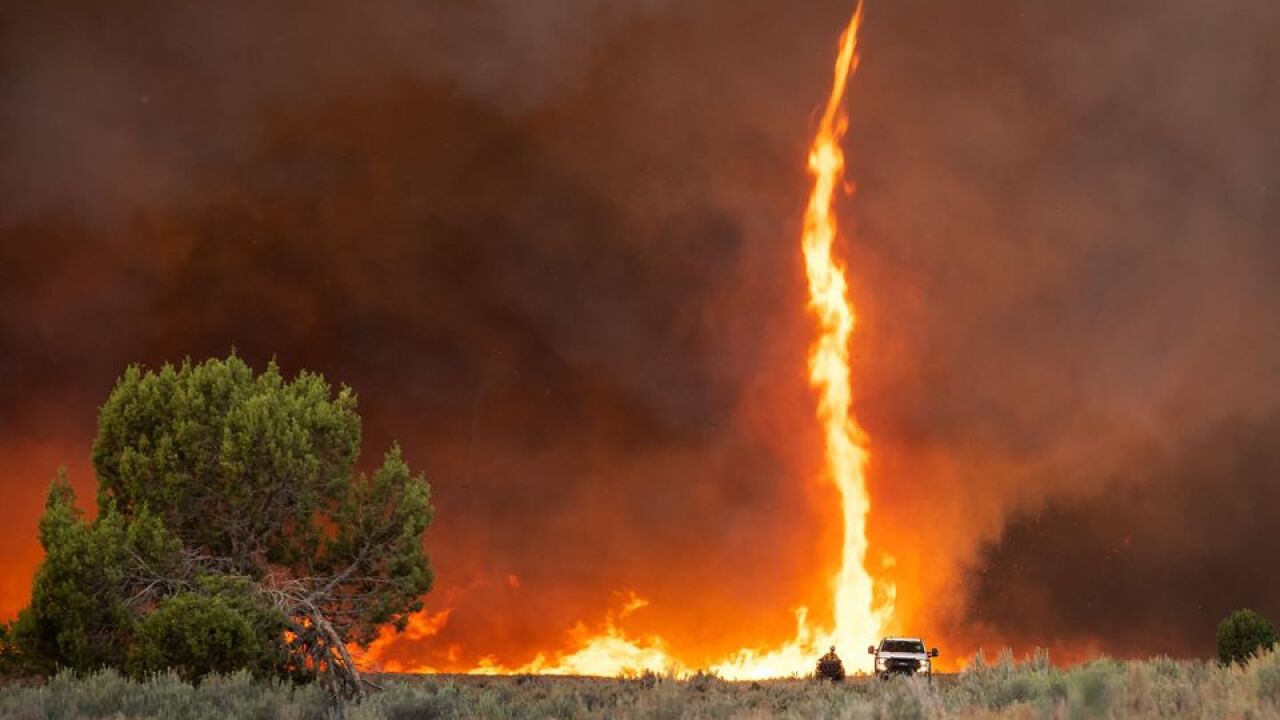 GRAND JUNCTION, Colo. — Crews battling the sprawling Pine Gulch Fire were presented with another problem overnight Tuesday — a flurry of lightning, and not solely from a rain-producing thunderstorm.

Instead, it was the fire itself — now an estimated 125,000 acres after growing 37,000 acres overnight — that produced cloud-to-ground lightning for several hours early Wednesday.

The phenomenon was a product of pyrocumulus clouds, which can form when moisture or atmospheric instability moves over an intense heat source, according to the National Weather Service.

In the case of the Pine Gulch Fire on Tuesday night, an outflow boundary had produced showers near the Wyoming border, north of the fire area. When that moisture moved south, the fire responded with a rapid output of heat, leading to the pyrocumulus, according to the NWS forecast discussion Wednesday morning.

Radar showed consistent lightning strikes for several hours, and NWS employees could see the lightning from their office in Grand Junction.

Did you hear thunder in Grand Junction last night? That's right...the #PineGulchFire produced hours of lightning and occasionally the bolts were visible. Here is a video taken at our office. The 3rd largest wildfire in Colorado's recorded history is full of surprises. #cowx pic.twitter.com/1u4ZlaEtlG

The extreme nature of the Pine Gulch Fire produced a couple more byproducts, noticeable in Grand Junction overnight. When the smoke plume from the fire rebuilt, the temperature in Grand Junction rose from 78 to 90 degrees, according to the NWS forecast discussion. The plume was also dispersing ash, which was falling in Grand Junction.

Vigorous pyrocumulus growth associated with the #PineGulchFire (seen here via GOES 16) has produced frequent lightning flashes (blue dots in the image) the last few hours. Thunder, lightning and falling ash have all been observed here at the office. Absolutely wild! 🔥⚡ #COwx pic.twitter.com/F7qIzaoNi7

Lightning has been a steady concern for crews battling the fires. While some thunderstorms were in the forecast this week, they were likely to be dry, with not much rainfall and more lightning, increasing the fire risk.

Wednesday was setting up to be another warm and mostly dry day on the Western Slope. The primary concerns, if storms do develop, will be gusty winds and more lightning.

The Pine Gulch Fire is one of four major fires currently burning in Colorado that have already scorched more than 175,000 acres of land. The Grizzly Creek Fire burning in Glenwood Canyon was at 29,000 acres Wednesday and has Interstate 70 still shut down. The Cameron Peak Fire in western Larimer County was 15,738 acres as of Wednesday morning, and the Williams Fork Fire burning in Grand County was 6,726 acres.