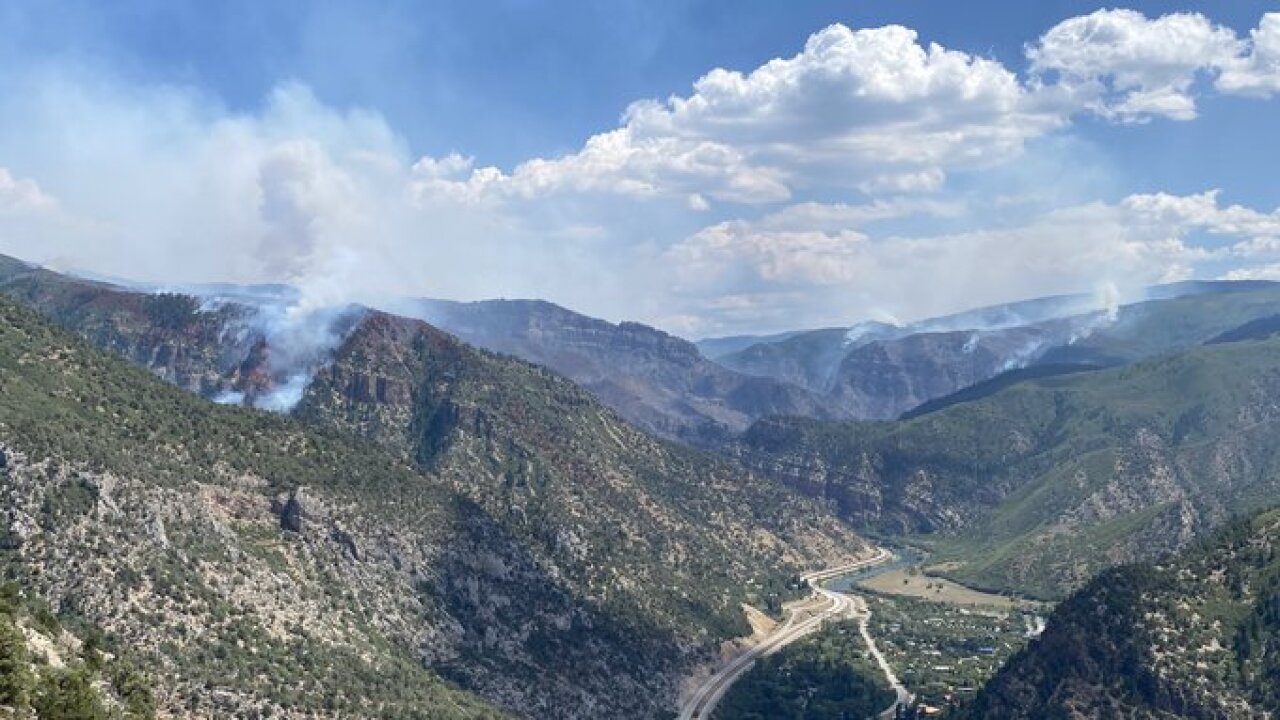 Copyright 2020 Scripps Media, Inc. All rights reserved. This material may not be published, broadcast, rewritten, or redistributed.
James Dougherty, Denver7
The Grizzly Creek Fire as seen from Glenwood Springs around noon on Wednesday, Aug. 12, 2020. 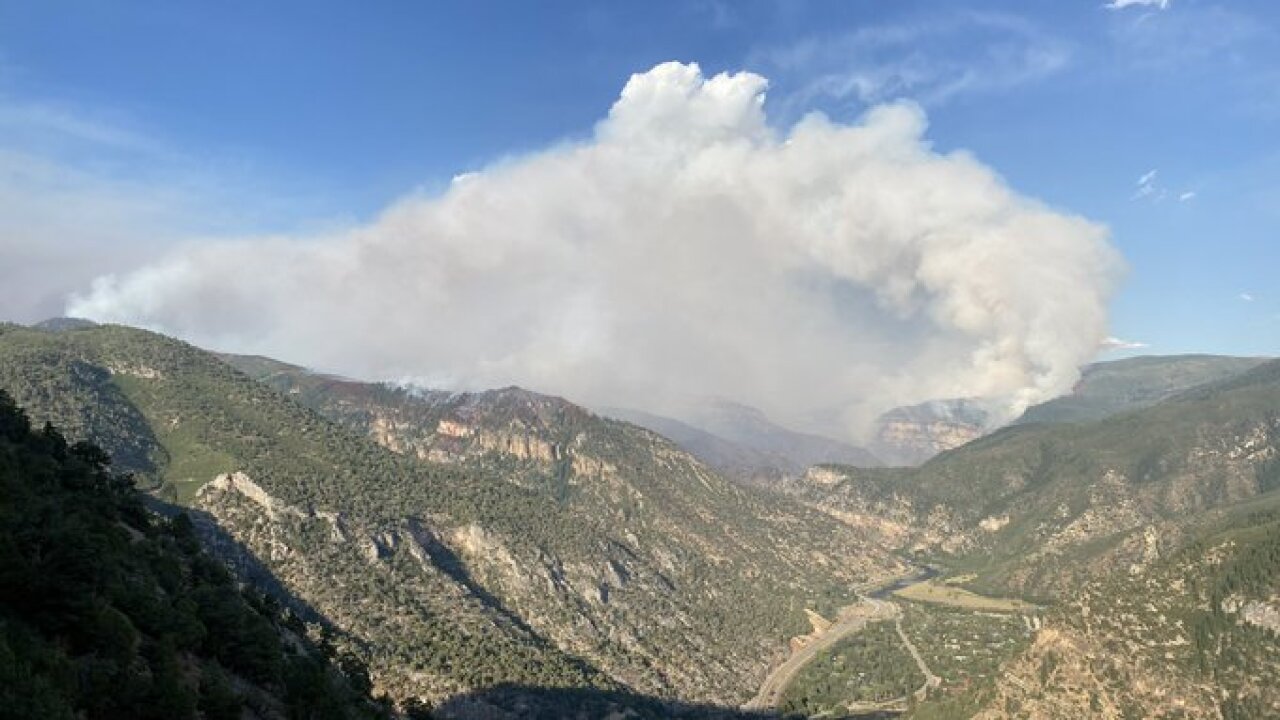 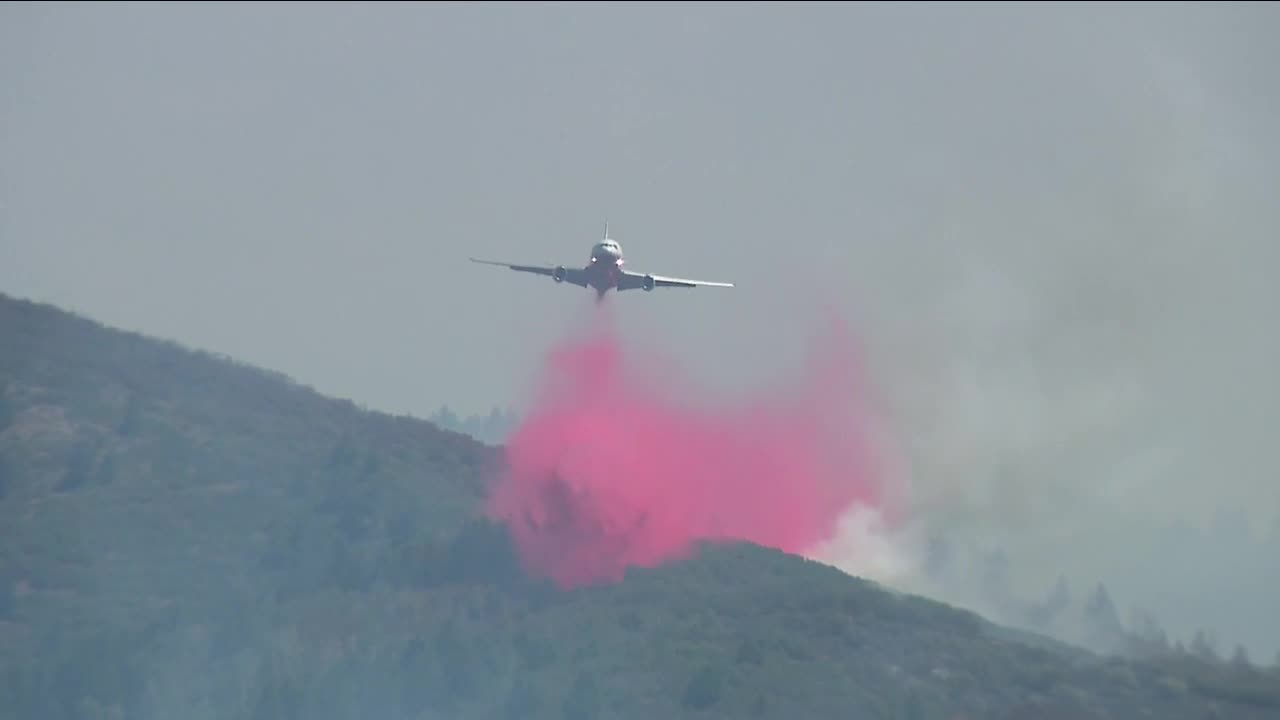 UPDATE (11:27 a.m., Thursday, Aug.13): We have a new story with developments from the Grizzly Creek Fire for Thursday, Aug. 13. Click here for the latest.

The Grizzly Creek Fire sat at 4,800 acres in size, with 0% containment, as of Wednesday evening after the fire jumped I-70 and the Colorado River on Tuesday.

The Rocky Mountain Type 2 Incident Management Blue Team took over command of the fire, which is burning just east of Glenwood Springs, Wednesday morning. There were 211 personnel on the fire, with more resources ordered. The National Weather Service has issued red flag warnings again for the Western Slope and Glenwood Springs area in effect into the evening.

The No Name, High Aspen Ranch on CR 115, Coulter Creek, CR 120, and Cottonwood Pass Road areas have all been evacuated as of Wednesday morning. Fire command said a hotshot crew would be setting up a hose and sprinkler kits near No Name, that engines and helicopters will be working to secure the Shoshone power plant, and that crews would be scouting the Flat Tops area to find buildings that might be at risk.

Engines, and crews and other resources will be in the Lookout Mountain Area, which was also evacuated Tuesday, preparing buildings for protection against the fire, management said.

Grizzly Creek Fire officials hosted a Facebook Live community meeting at 6 p.m. Wednesday on the fire’s Facebook page where they answered concerns from the public. The live stream is embedded in the player below.

The fire jumped I-70 and the Colorado River on Tuesday afternoon, moving south, and the fire is burning in several directions.

Fire managers said that weather conditions will continue to be hot and dry, with winds increasing in the afternoon and gusting up to 30 miles per hour. The fuel types “are very dry and receptive to fire,” officials said.

There are air quality health advisories for much of the mountain counties and Wester Slope due to wildfire smoke in effect until Thursday morning.

I-70 remains closed through the area, with the workaround being U.S. 50 east to U.S. 285 for those coming east from Grand Junction, and CO 9 to U.S. 285 south to U.S. 50 for westbound drivers, or CO 91 to U.S. 24 to U.S. 50 westbound. CDOT urge motorists to not detour via Independence Pass, between Aspen and Twin Lakes. CDOT shut the pass down again indefinitely on Wednesday afternoon after several vehicles hauling trailers became stuck on the pass and heavy traffic created other travel issues.

Interstate 70 in #GlenwoodCanyon, the interstate will be closed overnight between Mile Point 116 (Glenwood Springs) and MP 140 (Gypsum). The closure is for both directions of traffic and CDOT not does not have a timeline for reopening pic.twitter.com/jtrIEwW2vf

Cottonwood Pass Road, Coffee Pot Road, Transfer Trail and Clinetop Mesa roads are also closed, as is much of the federal land in the area.

The fire has Facebook and InciWeb pages that are being updated.

The cause of the fire, which sparked Monday afternoon, remains under investigation. The Eagle County Sheriff’s Office tweeted Wednesday that officials “unofficially” suspect that the fire was sparked by a blown tire, parking rim or dragging chain “as it looks like there were several ignition spots along the road.”

It is 'unofficially' suspected that the Grizzly Creek Fire was started by a blown tire, sparking rim or dragging chain as it looks like there were several ignition spots along the road.

The Pine Gulch Fire burning to the west, closer to Grand Junction, also grew quickly Tuesday and was more than 51,000 acres in size Wednesday morning.

“During this pandemic, firefighters and first responders are playing a critical role in keeping our state safe, and we want to remind everyone to please do your part in preventing human-caused wildfires,” Gov, Jared Polis said in a statement. “While this pandemic has been unprecedented, the Division of Fire Prevention and Control, along with our public safety partners, have been proactively working to ensure our state is prepared for this year’s wildfire season - including for challenges presented by COVID-19.”