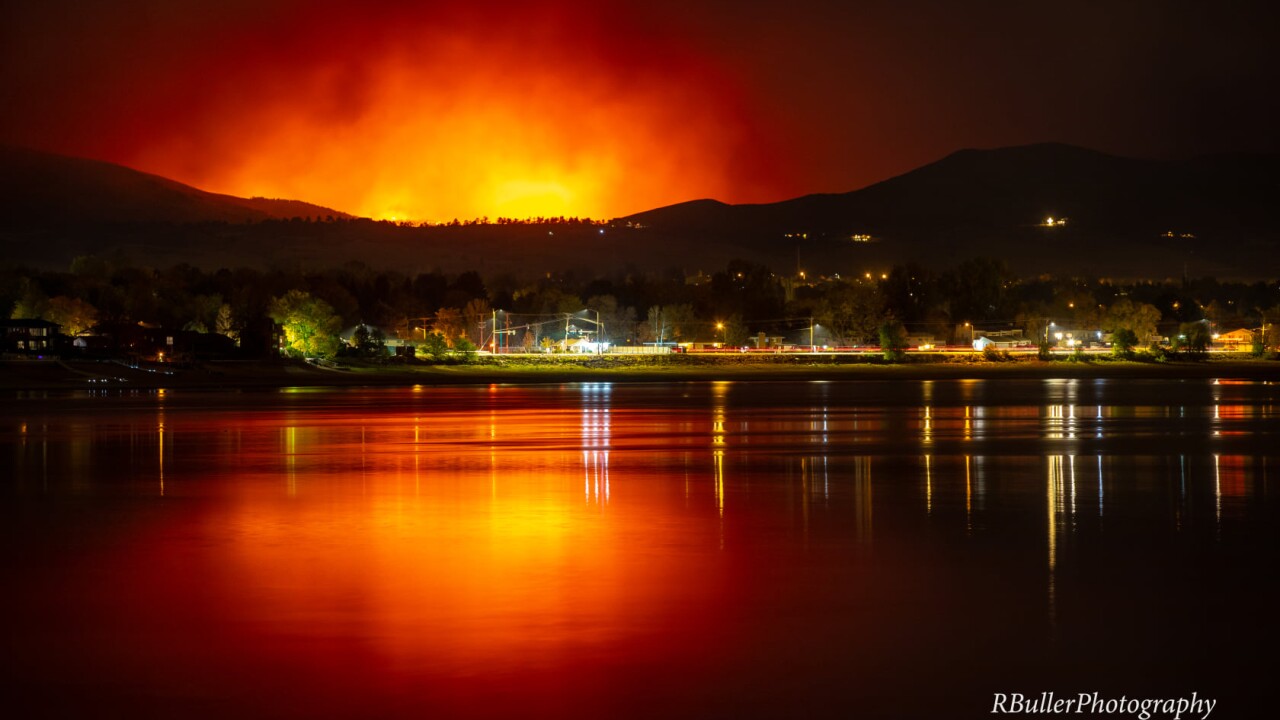 Ryan Buller/RBULLERPHOTOGRAPHY
Photographer Ryan Buller took this photo of the Cameron Peak Fire on Oct. 17 2020 and posted it in Denver7's Our Colorado photography page.

LARIMER COUNTY, Colo. — An incident commander at the Cameron Peak Fire, the largest wildfire on record in Colorado, said firefighters were "finally able to go on offense" on Monday.

Containment around the perimeter of the fire dropped to 51% after rising to 62% on Monday. Officials said this is due to the fire increasing in size, and therefore, perimeter, officials explained during a Monday evening community meeting on Facebook.

At noon, the Canyon Lakes Ranger District said the fire became "very active all the way from The Retreat to Storm Mountain" and officials were pulling crews back to County Road 43 for their safety. As they left the area, they turned on pumps and sprinklers to try to protect structures.

However by nightfall Tuesday, Incident Commander Dan Dallas said the fire looks much different than just two days ago thanks to the "good work" that "has been accomplished over the last several days."

On Tuesday morning, fire officials said the firefighting efforts were successful on Monday, despite the dry and windy conditions.

READ MORE: How to help those affected by Colorado's wildfires

Fire officials reported that aircraft — including a Very Large Air Tanker (VLAT), and small and medium helicopters — spent more than 60 hours above the fire on Monday. They dropped water and retardants on the southern perimeter near Glen Haven, The Retreat and Storm Mountain. The incident management team said firefighters made "excellent progress" securing the southern edge of the fire n this area.

Laying down fire lines around the southeast corner of the fire near Masonville remains a priority, the incident management team said.

Structure protection groups are working along the southern and eastern edges of the fire.

Conditions from Monday will be similar to Tuesday as fuels continue to dry out, officials said. A Red Flag Warning goes into effect Wednesday at noon through Thursday at 8 a.m.

Fire activity may increase in the next three days as dry weather persists around the fire.

Air quality is rated as moderate for both Tuesday and Wednesday in Estes Park, Longmont and Boulder.

This fire is a 24-hour operation, meaning firefighters are working to contain it through the day and night.

For updates on evacuations and closures, text LCEVAC to 888777 from your cell phone.

Competition for resources remains high nationwide due to wildfires across the west.

The cause of the Cameron Peak Fire remains under investigation. It is the first wildfire in Colorado history to grow beyond 200,000 acres.

It has an estimated containment date of Nov. 8.