Crews on the ground, in the air continue attacks on Boulder County's Calwood, Lefthand Canyon fires

Investigators determine point of origin, but cause still under investigation 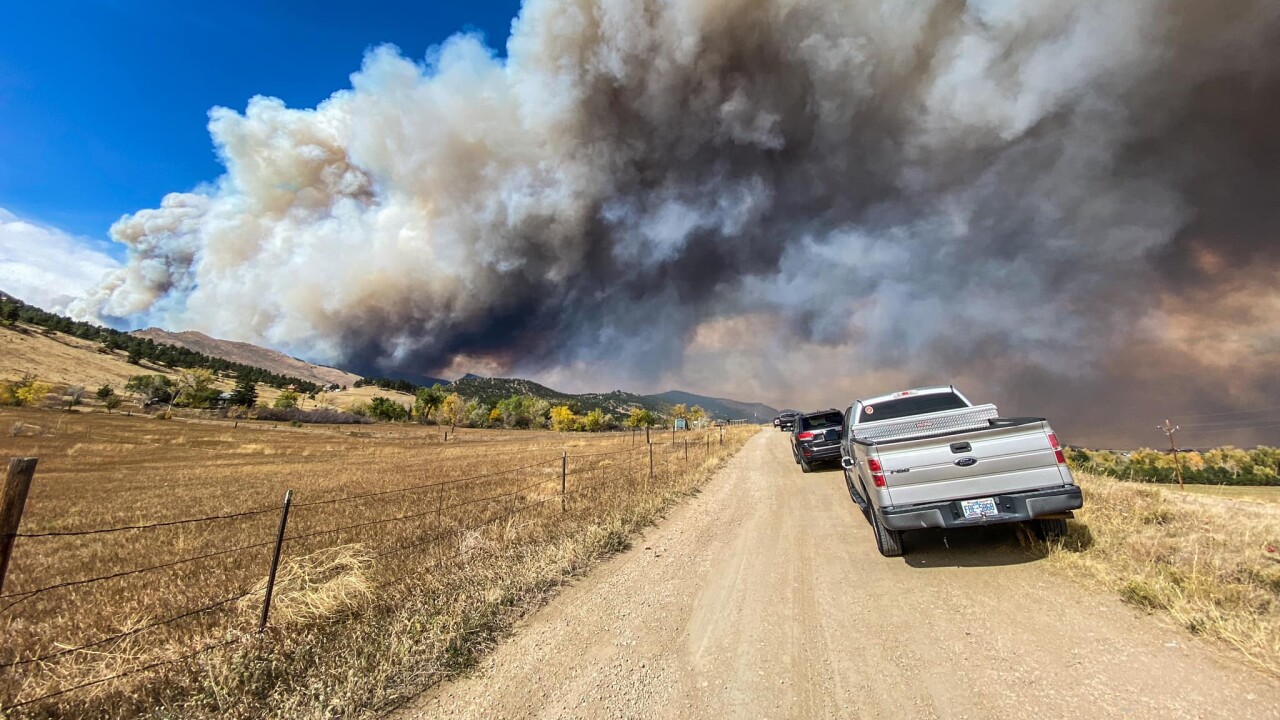 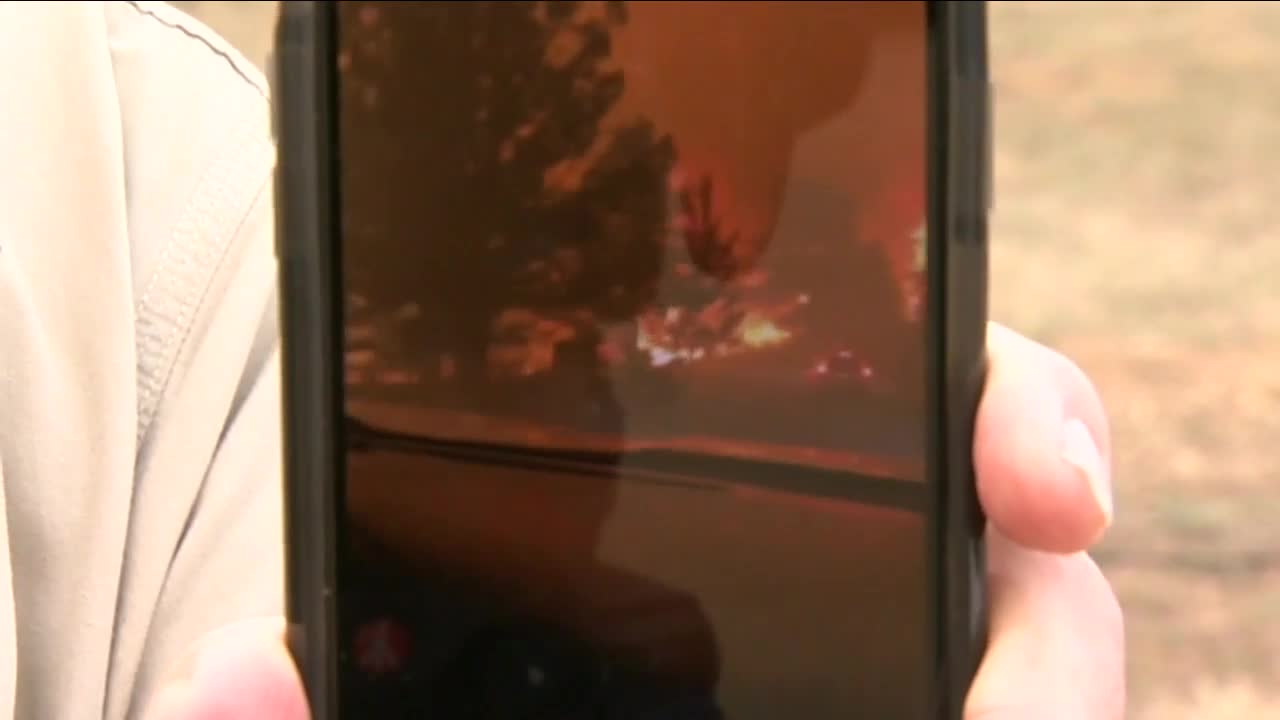 BOULDER COUNTY, Colo. — As two large wildfires continue burning in Boulder County, fire officials say crews on the ground and in the air have been making good progress.

As of Tuesday night, the Calwood Fire is 9,854 acres and 21% contained. The Lefthand Canyon Fire, which is southwest of Calwood, is 459 acres and remains 4% contained, according to the Rocky Mountain Incident Management Team Black. The cause for both remains under investigation.

During a virtual community meeting Tuesday evening, officials said a weather pattern occurred Oct. 17 that largely contributed to the growth of the Calwood Fire, and added fire danger will remain a challenge as it will still be very dry Wednesday before the weather shifts to cooler conditions on Thursday.

Fire officials blamed exceptionally dry fuels for contributing to the fire growth for the Calwood Fire, as well as this year's lack of monsoon rains, which a meteorologist with the incident team said did not develop this year.

Boulder County Sheriff Joe Pelle said investigators have narrowed the point of origin for both the Calwood Fire and the Lefthand Canyon Fire, but a cause for both remains under investigation. No additional structures were lost or damaged, he said.

On Monday, crews worked around the entire Calwood Fire to create fire lines as direct as possible to the fire's edge. Aerial crews flew on the north side, where firefighters were monitoring for spot fires, including in the area of the South St. Vrain drainage, the incident management team said. Along the southern edge, firefighters created fire line west to try to connect to the 2003 Overland Fire burn scar area, where fuels are lighter, the incident management team said.

"We just drove through it": Locals recount escaping Calwood Fire

Crews at the Calwood Fire will continue this work and constructing fire lines on Tuesday. When conditions are safe, officials will use aircraft to help the fight from the sky.

Similar efforts are ongoing at the Lefthand Canyon Fire. Crews are constructing fire line along lines of retardant that was put in place Sunday. Helicopters dropped water on hot spots while firefighters on the ground monitored for spot fires. More of the same is planned for today, the incident management team said.

The Calwood Fire has destroyed at least 26 structures as of Monday evening, officials said.

Cloud cover Tuesday morning over the fires will diminish by the afternoon, leading to sunny skies and highs around 70 at lower elevations and upper 50s to low 60s at higher ones.

Both fires will see winds around 15-25 mph at higher elevations in the morning, which will ease into just 8-11 mph by the afternoon. Clearer skies combine with lower relative humidity means both fires could be more active Tuesday, the incident management team said.

A cold front will settle around the area by sunset.

Around 10:30 a.m., Josh Shroyer, planning operations trainee with the Calwood and Lefthand Canyon Fires, provided an update on the two fires.

He said weather wasn't as bad as they expected on Monday, so they were able to amp up their containment efforts at the Calwood Fire. Crews did "excellent work" containing the fire to prevent it from moving farther north, Shroyer said. In the northeast corner, they are deciding the best option on where to hold the fire, while keeping it away from values at risk and structures.

Crews on the southern edge of the fire did good work, but officials aren't ready to call it contained just yet, he said. He said he expects that side of the fire to be at least partially contained within the next day or two.

Regarding the Lefthand Canyon Fire, he said firefighters put in direct hand line on the west side and dozers were able to get close to the fire's northern edge, south of James Canyon Drive. Crews have tied good handline on the east side to dozer and other hand lines on the northeast side, Shroyer said.

He said they have adequate resources to work with the blazes and have a good plan on how to deal with it.

A virtual community meeting regarding these two fires is planned for Tuesday at 7:30 p.m. on Facebook. Officials will detail updated information on the fires and will answer community questions. Click here to join the meeting.

Boulder County residents can sign up for emergency notifications — via both cell phone and landlines, texts and email — by visiting www.Boco911Alert.com.

Mail delivery is limited in Jamestown, Ward and parts of Lyon around Highway 7, as well as parts of Boulder in the 80302 ZIP code.

Residents in Jamestown and Ward can pick up mail at the Nederland Post Office, located at 350 East St. Monday through Friday between 8 a.m. and 4 p.m., and on Saturday from 9 a.m. to noon. Lyon residents along Highway 7 can pick up their mail at the Lyons Post Office at 305 Railroad Ave. Monday through Friday from 7:30 a.m. through 4:30 p.m., and Saturday from 8 a.m. through 11:30 a.m. Boulder customers in the 80302 ZIP code can grab their mail at the Boulder Main Office at 1905 15th St.

A photo ID is required to pick up mail.