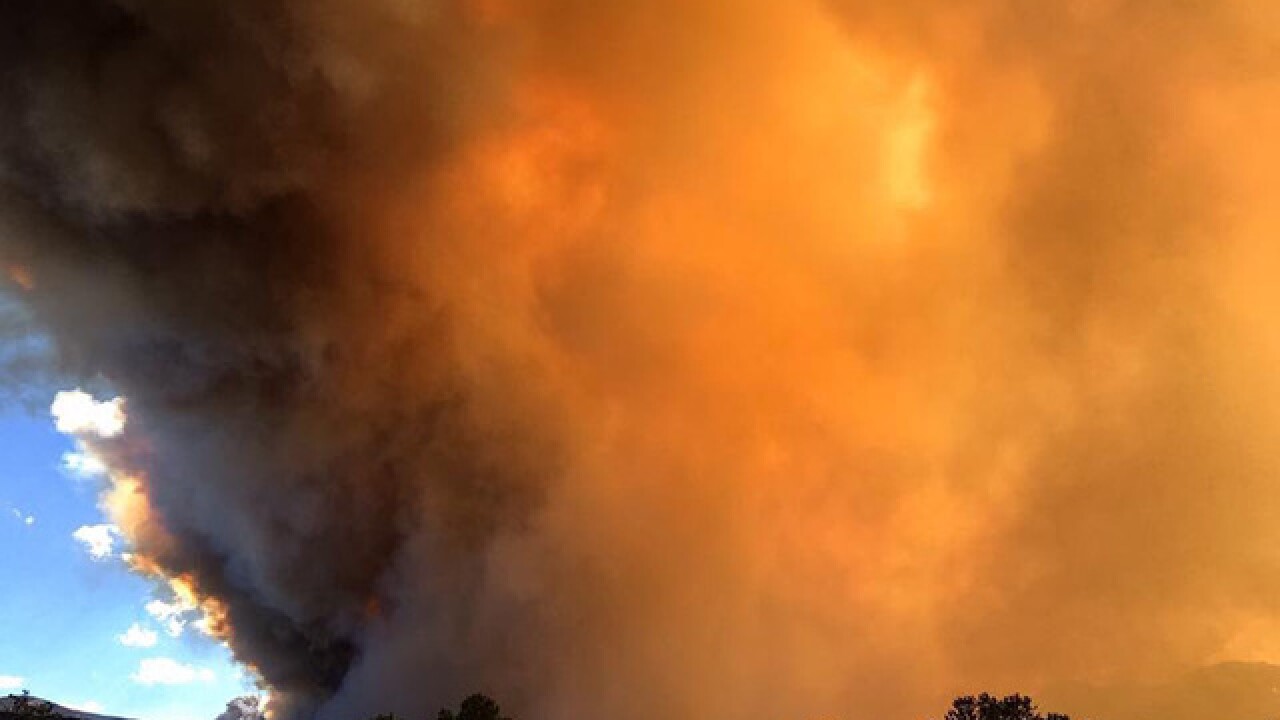 <p>"View from a friend's home just outside of Salida!" They left once they saw flames over the hill." (Photo/Denver7 viewer Ethan Steinberg) </p>

There were six fires burning in Colorado on Sunday morning.

The Cold Springs Fire near Nederland is now 100 percent contained. All residents were allowed to return home and all roads were back open Thursday night, Boulder Office of Emergency Management officials said.

The fire, that was sparked Saturday, has burned more than 500 acres and destroyed eight homes.

Two out-of-state campers have been charged with igniting the fire, the Boulder County Sheriff's Office said.

The Beaver Creek Fire burning north of Walden has burned about 22,885 acres. It is five percent contained.

The fire, which started June 19, is the largest fire burning in Colorado.

"Active fire exists along the perimeter and is consuming unburned areas within the interior of the fire," according to the Forest Service. "Hotter, drier conditions have returned to the fire area and are supporting increased fire activity."

The cause of the fire is still unknown, officials said.

The Hayden Pass Fire is burning near Coaldale, between Canon City and Salida.

On Sunday morning, fire officials said it has now burned 16,350 acres since it was started by a lightning strike on July 8.

140 homes have been evacuated.

Fremont County sheriff Jim Beicker confirmed the first structure has been lost in the fire -- a summer cabin in the Cottonwood Creek area.

Beicker said they are allowing homeowners who were first evacuated to return to their homes for a couple hours starting at 8 a.m. on Friday to grab belongings and check their properties.People evacuated from County Road 6, County Road 40 and the Fox Creek Subdivision must sign up at the entrance of their subdivisions by 5 p.m. Thursday to be escorted back to their homes.

The Sheriff said if homeowners are unable to be there in time, they can have a neighbor sign-up for them.

Residents will need their I.D. and should be prepared to provide additional information to verify they live in the area.

The sheriff said homeowners will be given two hours before they're escorted back outside the evacuation area.

At this point, other people who have been evacuated from the fire will not be allowed back to their homes.

"Strong winds, dry conditions and the large volume of dead woody debris in the area contributed to this rapid growth," the Forest Service said.

There are 816 fire personnel assigned to the fire.

Firefighters said they expect the fire to have significant growth and move south Thursday with big plumes and a northwest wind.

The fire was sparked by lighting on June 14.

"There are four areas of heat showing within the perimeter of the fire," according to fire officials. "Firefighters will continue to patrol and monitor this fire perimeter and additional burning that may occur."

The fire has burned about 50 acres, according to Durango Fire Rescue.

Officials said 2 helicopters, a tanker and dozers will work the fire on Thursday. The fire is 40 percent contained and pre-evacuation orders have been lifted.

All day-use areas at and near the park's lake are closed until further notice. Firefighters are using the lake and boat ramp to stage heavy equipment.

The 10 to 15 acre fire was first reported at 1:30 Wednesday afternoon.