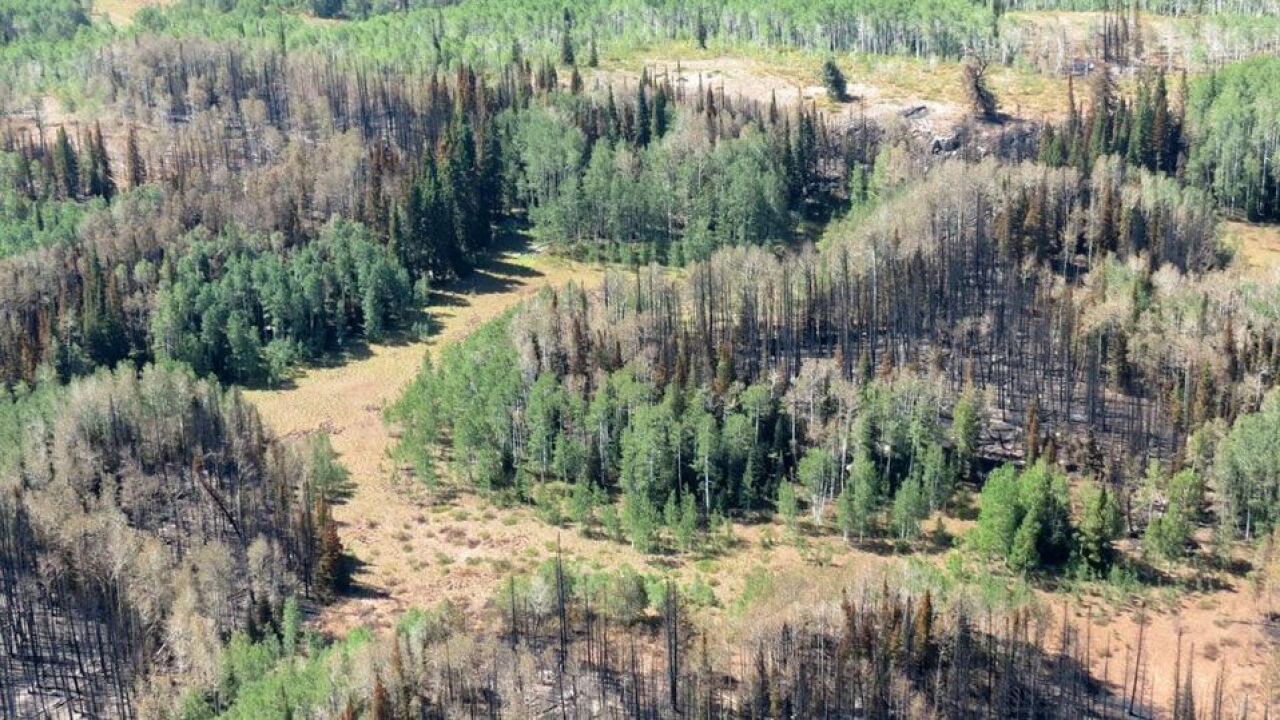 Copyright 2020 Scripps Media, Inc. All rights reserved. This material may not be published, broadcast, rewritten, or redistributed.
Grizzly Creek Fire
This Sept. 7 photo shows areas that burned during the Grizzly Creek Fire and others that remained largely untouched.

DENVER — The cold front that moved into Colorado Monday night brought freezing temperatures, rain and snow to many of the wildfires burning in Colorado – a great boost to firefighters who have been battling the large fires in hot and dry conditions for weeks.

Though temperatures are expected to warm across the state the remainder of the week, and conditions will dry out again, fire crews say that the cold and moisture will be a boon to their efforts moving forward.

Here is the latest on the major wildfires burning in Colorado:

Between 8 and 14 inches of heavy, wet snow fell on the Cameron Peak Fire Tuesday and overnight into Wednesday, according to fire officials.

Cass Cairns, spokesperson with the Cameron Peak Fire, said Wednesday morning the snow had accumulated at the fire, keeping the ground and most fuels damp.

The fire has not grown since the snow started Tuesday, she said. It's currently 102,596 acres and 4% contained. The fire won't likely grow much in the coming days as the snow melts. It's not clear how the snow affected the fire's perimeter since, for the most part, crews were not able to get near the fire Tuesday and aerial crews couldn't fly over it.

Cairns said flurries will fall over the fire Wednesday, but they won't see the dumping that happened Tuesday. Winds will stay relatively calm in the area as well, though there is some concern about snags coming down, she said.

Containment on the Pine Gulch Fire – the largest wildfire in Colorado history – stood at 95% as of Wednesday morning after the cold front dropped temperatures to freezing levels for much of Tuesday and dropped rain and snow across the fire. It remains at 139,007 acres in size.

The incident commander said firefighters and heavy equipment were stood down after moving equipment to solid ground, as more than a half-inch of rain fell at lower elevations and 1-4 inches of snow fell above 6,500 feet.

Firefighters will continue to monitor the fire from roads and move out equipment no longer needed as more are demobilized and sent home or to other fires as containment nears 100%.

Crews continue to do fire suppression repair along the perimeter and interior of the fire and are prioritizing the Douglas Pass area on the fire’s western side and Lonesome Ridge area on the interior.

There is a chance of rain in the area of the fire on Wednesday morning and again in the afternoon and evening. Temperatures will be in the 40s for most of the area, with relative humidity at 35-60 percent. But temperatures will increase, and the air will dry out as the week goes on.

There is no growth on the fire expected Wednesday and unlikely to be much interior burning due to the wet fuels and cloud cover.

There were 323 personnel still on the fire as of Wednesday morning. The fire sparked July 31 north of Grand Junction and has been deemed lightning-caused.

“We did find it a bit ironic that on our last day at the fire the weather took a dramatic U-turn and resembled the conditions that we are used to in Alaska. Needless to say, we were not expecting snow and freezing temperatures in early September. Evidently, Alaska and Colorado have more in common than we thought. While we are partial to our home state, we have to admit that northwest Colorado is a special place. We can only hope the landscape heals quickly and Coloradoans can get back to enjoying the beauty that is the Rocky Mountains,” Alaska Incident Management Team Incident Commander Norm McDonald wrote in a Facebook post Wednesday morning.

Though fire managers have not updated the containment or acreage as of Wednesday morning, the fire was 32,464 acres and 91% contained on Tuesday afternoon.

The new command team will be working with Burned Area Emergency Response teams to figure out and implement any emergency treatments for areas and watersheds that have burned.

“While our assignment ends with the Grizzly Creek Fire at 91% containment, we realize there is still much work to be done and the ramifications of this fire will be long-lived with the potential for mudslides and flooding. We can only hope that Mother Nature decides to give Coloradoans a break; you folks certainly deserve one after what you have endured this summer,” McDonald added in his message.

The Broncos also sent firefighters a warm send off:

The cold temperatures and snow have continued to dampen fire behavior on the Williams Fork Fire in Grand County, which was 12,157 acres and 10% contained as of Wednesday morning.

Temperatures are expected to remain in the 40s and below Wednesday, with some snow continuing.

“The recent snow has greatly reduced fire activity; however, there is a very real chance you will see smoke from within the fire area over the coming weeks as temperatures fluctuate,” said Michael Haydon, Incident Commander.

There are closures in the Arapaho and Roosevelt National Forests that remain in effect because of the fire, which was caused by humans.

The Middle Fork Fire, which started Sunday north of Steamboat Springs and took off Monday ahead of the cold front, still sat at 3,522 acres and 0% containment as of Wednesday morning.

The Routt National Forest ordered a closure of several trails in the Middle Fork Fire area on Wednesday to keep the public from interfering with firefighting efforts. But there are no roads or trailheads closed in the area.

The fire is expected to see minimal behavior again Wednesday but increasing behavior toward the weekend as conditions warm and dry.

More personnel have arrived to the fire, including 30 wildland firefighters. Crews are focusing on developing plans for structure protection in the area and indirect firefighting in the areas that are hardest to reach for firefighters and most unsafe.