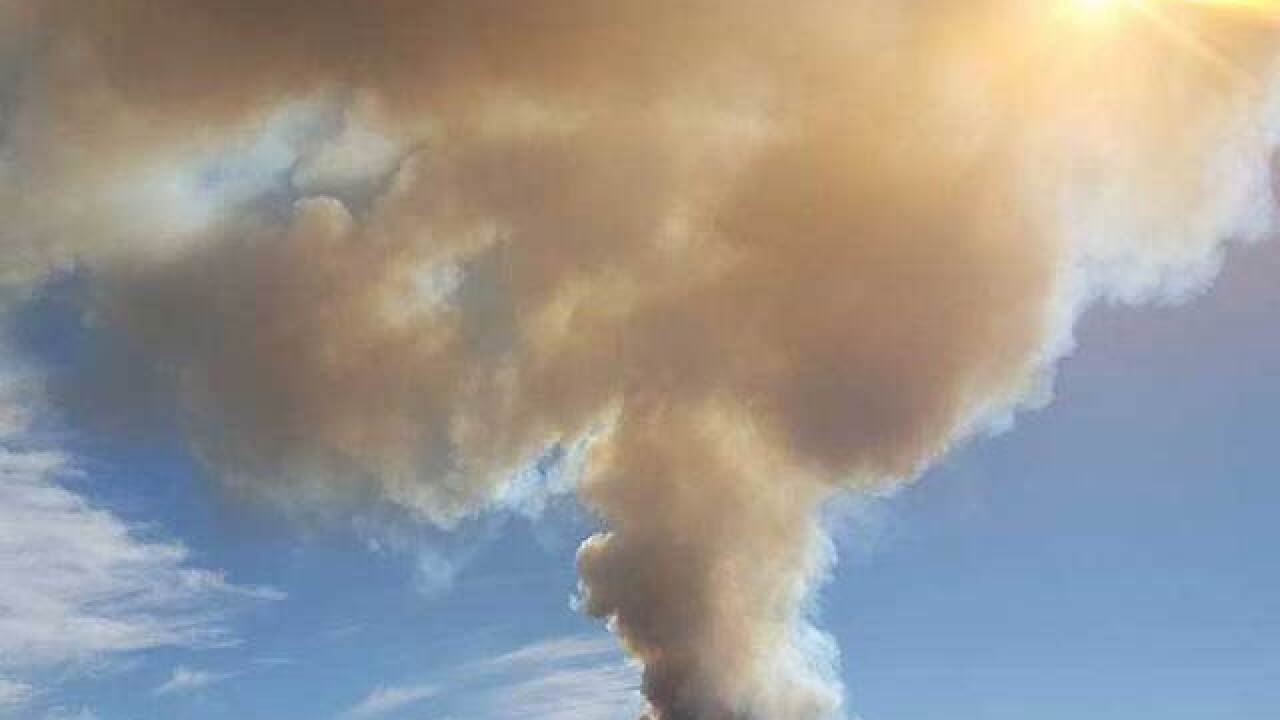 The Beaver Creek Fire made another big jump on Wednesday, consuming an additional 3,200 acres.

One firefighter has suffered a minor injury and approximately 40 residents and their cabins are currently threatened by the blaze, the latest update shows.

One of the cabins threatened is an historic, 100-plus year old structure belonging to the Martin Hunter family.

“It’s my great grandpa’s homestead,” Hunter said. “He ran a mine up there.  It was the third largest copper mine back in 1910.”

Hunter drove up earlier this week to see how bad the fire was.  That’s when authorities began evacuating residents.

“The Fire Marshal gave me 15 minutes to retrieve personal belongings,” he said.  “I took 20.”

Hunter told Denver7 that he was able to save some photographs and mining logs, but had to leave a few other things behind.

“There’s an old dresser with swinging mirrors on it.  There’s a 1904 Chickering Piano, a stand-up.  There’s no way I was going to get that out,” he said.

As he left the homestead, he used his cell phone to shoot video of the flames.  He then sent it to his daughter, Dani Ball.

“I was at work when I got the video,” she said. "I cried in front of my class and had to leave.”

Ms. Ball said her great grandparents got married in the main living room of that cabin.

“My parents honeymooned up there. My grandparents spent every day of the summer up there and so did I, as a kid,” she said.

Ball has setup a GoFundMe account to help residents who suffer property damage in the fire.  She told Denver7 that if the property owners don't need it, the money will go to the local fire department.

While the Hunters stress out about the flames, fire officials are optimistic.

“We’re not aware of any structures that have been burned,” said U.S. Forest Service spokesman Aaron Voos. “That’s not to say that there haven’t been. The fire made a large run (Tuesday) night.  There are still some areas we haven’t been able to get access to.”

Voos said the fire is burning in tall timber about a mile from the Wyoming border.

Windsor resident Tom MacGillivray could see the smoke from his fishing spot, just a few miles southeast of Encampment, Wyoming.

“Earlier today (Wednesday) it was white and then this afternoon it turned drastically black,” he said.

MacGillivray, who took photos of the fire and shared them with Denver7, said the good news is that the area is not heavily populated.

Voos said the fire is burning in heavy timber that is “both dead and alive.”

“Some of it is beetle kill,” he said.  “Some of it is healthy timber, but the main reason for the fire's rapid spread is the wind.”

When asked how long the fire will continue to burn out of control, Voos said he couldn’t hazard a guess.

“Heavy timber will burn for a while,” he said, “so we’re anticipating the fire will last a while and are planning for the long term.”

Voos told Denver7 that the number one priority, other than safety, is to do structure protection, clean up some of the fuels and set up sprinkler lines.

He said there are several closures in the area.

“The Big Creek Lakes, Big Creek Lakes Campground and Independence Mountain are all closed,” he said. “All roads and trails in the area around the fire are also closed.”

Voos said that as the fire has grown more complex, a decision has been made to bring in a Type II Command Team.

He said Type II teams are made up of people who generally work together traveling from fire to fire.

“They’ll have more resources at their disposal,” he said. “That team will take over Thursday morning.”