416 Fire: High potential for extreme fire behavior over the weekend as blaze grows to 8,691 acres

The wildfire, now 8,691 acres in size, remains 10 percent contained as of Saturday, fire officials said in the latest update from La Plata County.

LA PLATA COUNTY, Colo. – The 416 Fire, which has been burning for over a week about ten miles north of Durango, grew over 1,500 acres overnight prompting new mandatory evacuation orders for 220 more residents in southwest Colorado.

A mandatory evacuation order was issued Saturday afternoon for homes in the Falls Creek Ranch and High Meadows subdivisions and for homes on the west side of County Road 203 between Trimble Lane and Cometti/Mead Lanes.

People living on the east side of County Road 203 east to the Animas River between Cometti/Mead/Albrecht Lanes south to Trimble Lane remain under pre-evacuation notice, La Plata County officials said in a press released posted to Facebook.

Officials ask residents to evacuate the area as soon as possible.

Cars lined up to evacuate. First responder told us residents need to be out by 3pm or they'll have 5 mins to grab what they can & leave. #416fire pic.twitter.com/d0EFZxyFha

For up-to-date information on evacuation status, you are asked to call the La Plata County Emergency Operations Center at (970) 385-8700. You can also visit. www.co.laplata.co.us.

U.S. Highway 550 remains closed from mile marker 32 to 47. Due to new evacuation notices, the highway will close the southbound lanes indefinitely during the evacuation period. For up-to-date information on road closures visit www.cotrip.org.

The wildfire, now 8,691 acres in size, remains 10 percent contained as of Saturday, fire officials said in the latest update from La Plata County.

Weather will be a concern this weekend as critical conditions are expected in the area – an area which is currently experiencing “exceptional drought,” the most severe category handed out by the U.S. Drought Monitor.

Southwest to west winds gusts that could potentially reach 25 mph, along with humidity values in the single digits to low teens, will also make firefighting efforts difficult Saturday.

GALLERY: See photos from the 416 Fire in La Plata County

Also of concern is the Haines Index, which measures the stability and dryness of air over a fire. It’s currently at level 6, the highest most extreme value in the index, according to fire officials.

“This indicates that there is a high potential for extreme fire behavior, intensity and growth,” said Todd Pechota, with the Rocky Mountain Incident Management Team, the crew currently handling the 416 Fire.

Smoke from the #416fire is rapidly intensifying as more evacuations are underway. It wasn't like this just a short time ago. pic.twitter.com/7P0meyeog6

Firefighters in Division X are currently building indirect fireline and thinning fuels to create a fire break. Officials said this is being done to prevent the fire from impacting Purgatory Resort.

View the most recent map of the fire embedded below. 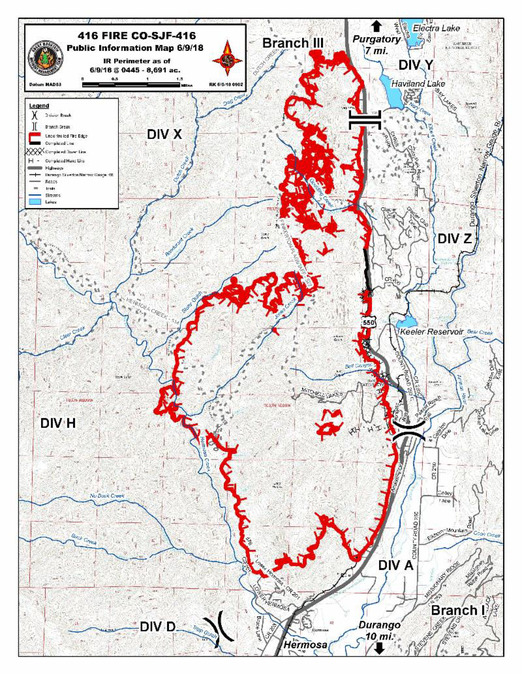 Officials said early Saturday that a community meeting is scheduled for 6 p.m. at the La Plata County Fairgrounds.