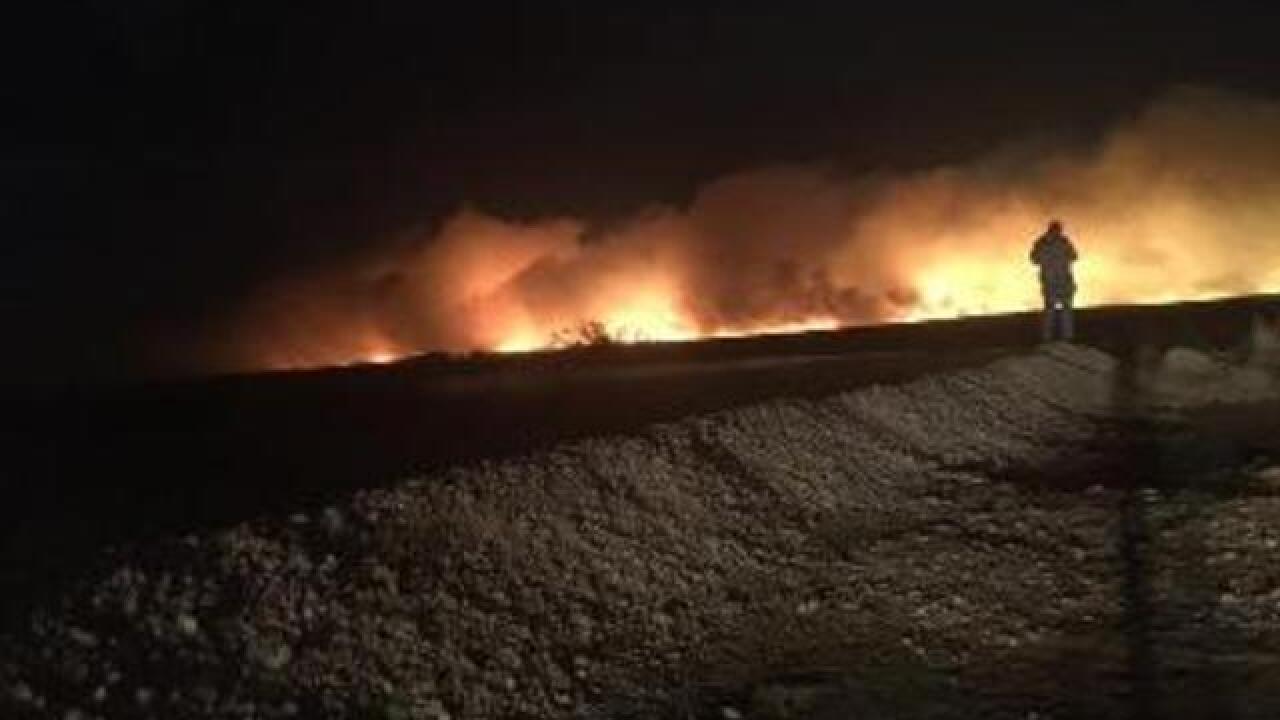 Crews made progress against wind-whipped wildfires that spread from Oklahoma into southern Kansas, burning hundreds of square miles of largely grassland.

While at least one home in Kansas and several outbuildings were destroyed, no serious injuries were reported.

Smoke from the fire, which burned about 620 square miles in the two states, was reportedly detected as far away as St. Louis, hundreds of miles to the northeast.

Gov. Sam Brownback said Thursday that the fire was largely contained in Kansas except in Barber County, which is southwest of Wichita along the border with Oklahoma. He encouraged people to heed requests to evacuate.

"We haven't sustained any fatalities yet, but that doesn't mean we can push it," he said.

In Oklahoma, the fire was moving toward the city of Alva, population about 5,000, but by early Thursday evening, the flames had not advanced enough to prompt evacuations there, according to Oklahoma Forestry Services spokeswoman Michelle Finch-Walker.

Oklahoma authorities said the cause of the fire was under investigation.

Strong winds with gusts of 50 mph fed the fires Wednesday, but with conditions "not as intense" and more crews arriving, firefighters were able to "get out there and really attack the fire" on Thursday, said Shawna Hartman, the spokesman for the Kansas Forest Service.

Darcy Golliher, a spokeswoman for the Kansas Incident Management Team, said the section of the fire in Barber County, which has sustained the most damage, was about 15 percent contained late Thursday and is expected to last through Friday. She said there hopefully would be only a few hot spots to monitor over the weekend.

"It will all depend on the wind," she said.

She said in an email that authorities are referring to the fire as the Anderson Creek Fire because it started in Anderson Creek, Oklahoma, and worked its way up through Kansas. And, while there are various sections of land burning, it's all considered one fire.

The fire, which came close to Medicine Lodge on Wednesday, destroyed a home and an outbuilding on the outskirts of the Barber County community of about 2,000 residents. Voluntary evacuation orders issued there earlier were lifted Thursday afternoon.

Voluntary evacuations had also been sought for the small towns of Sun City and Lake City.

Mark Dugan, who owns a ranch in Barber County, said Thursday that controlled burning is common practice in the region because it gets rid of unwanted vegetation. But this fire destroyed about 15 miles of fence on his land.

He said he now has about 300 head of cattle on his wheat field, where they'll have to stay because the fence is gone.

"I guess I'll leave them there and not worry about harvesting the wheat," he said.

A separate grass fire also hit near the Kansas town of Burrton, which is about 30 miles northwest of Wichita. One home and several livestock were destroyed. That fire had been controlled later Thursday.