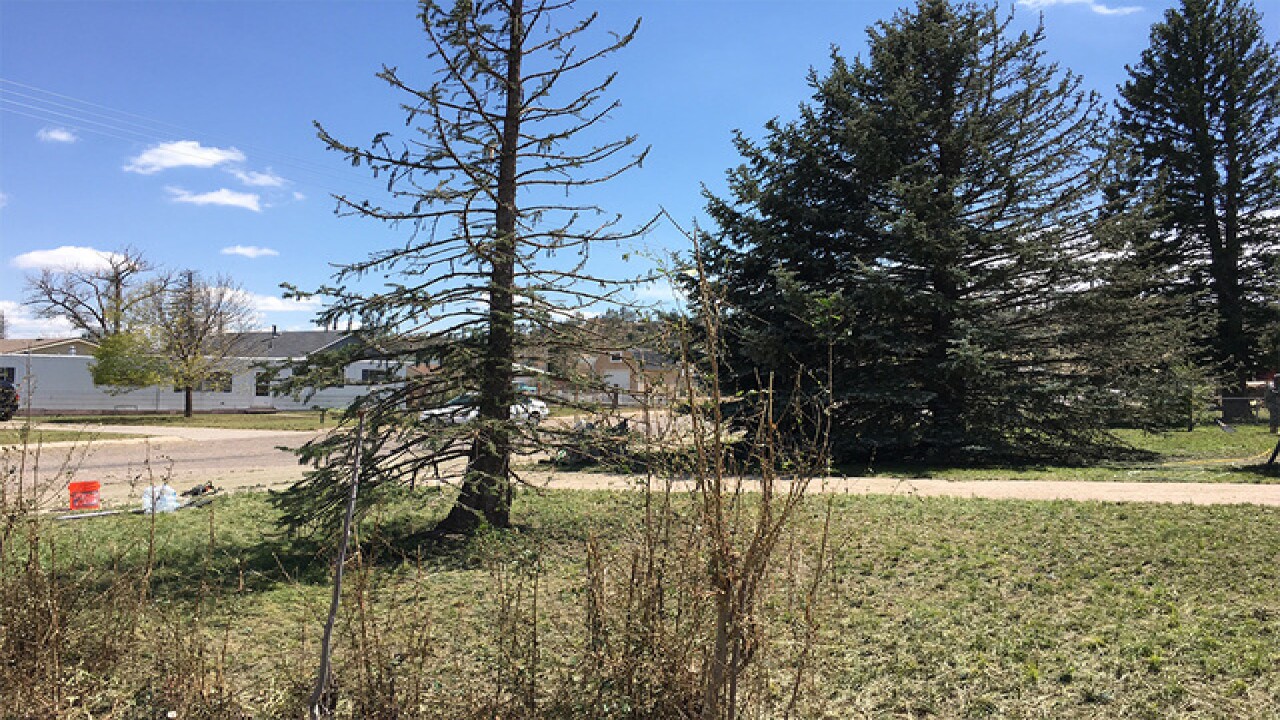 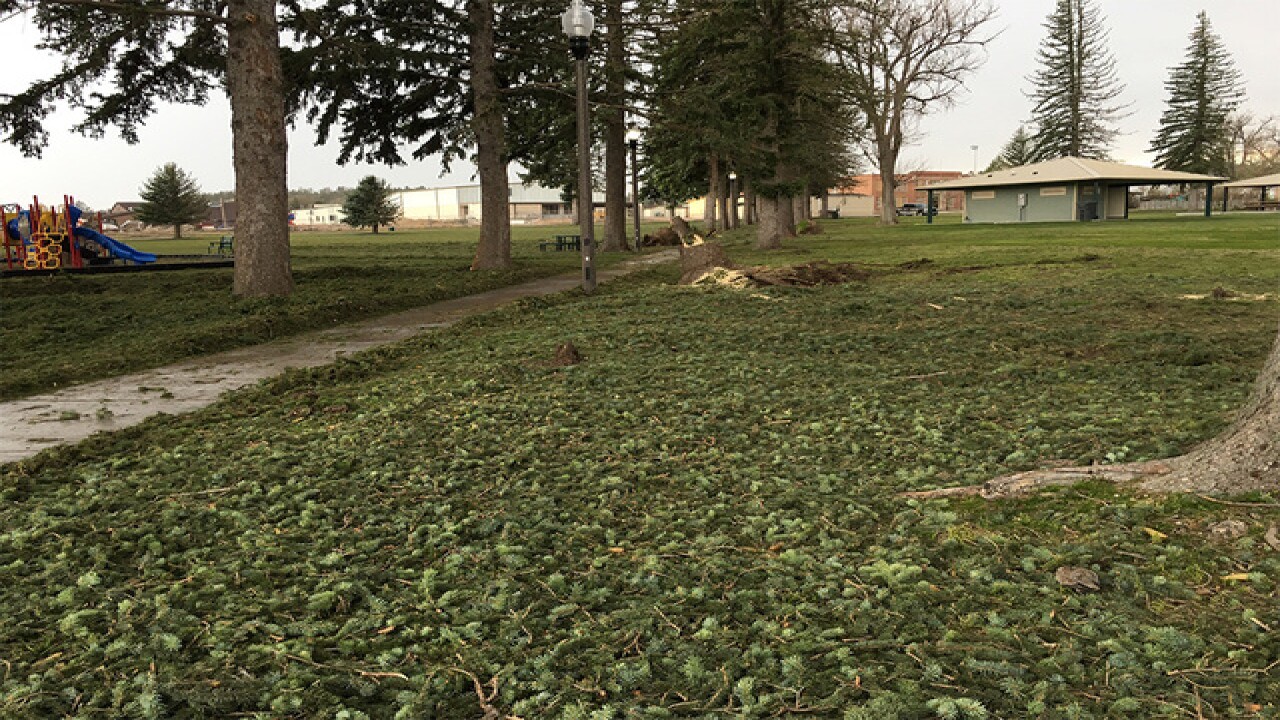 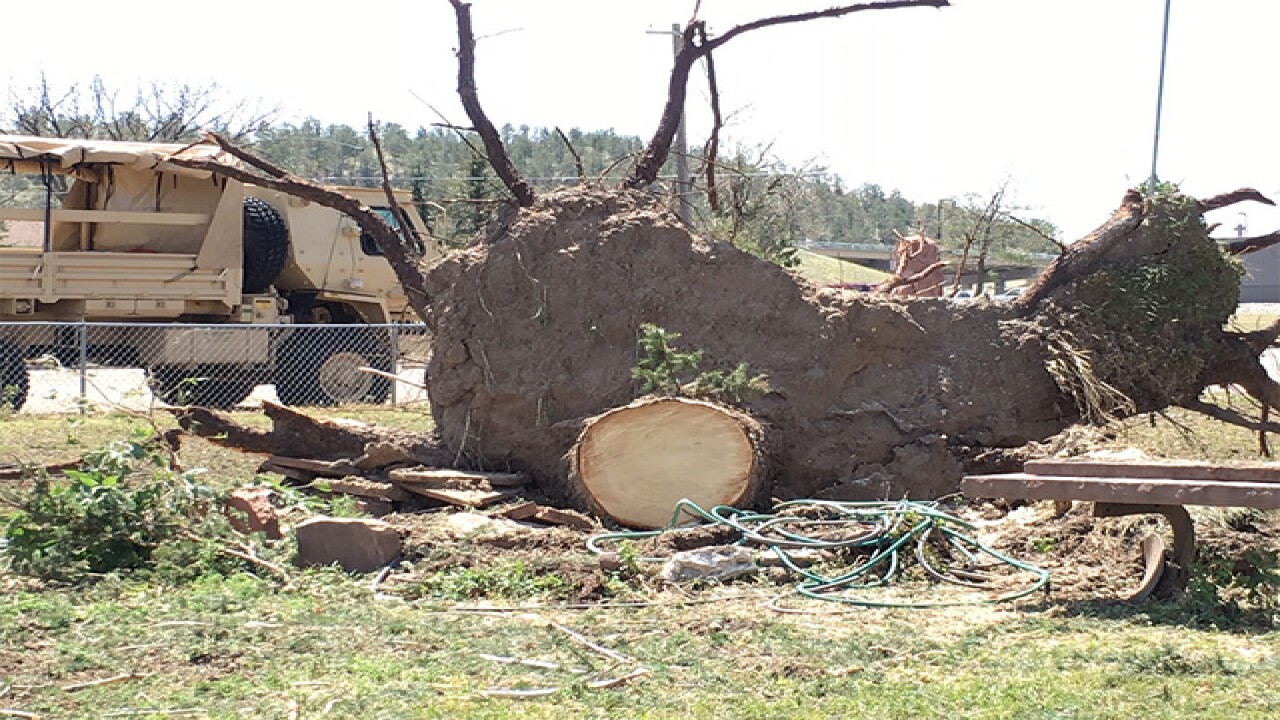 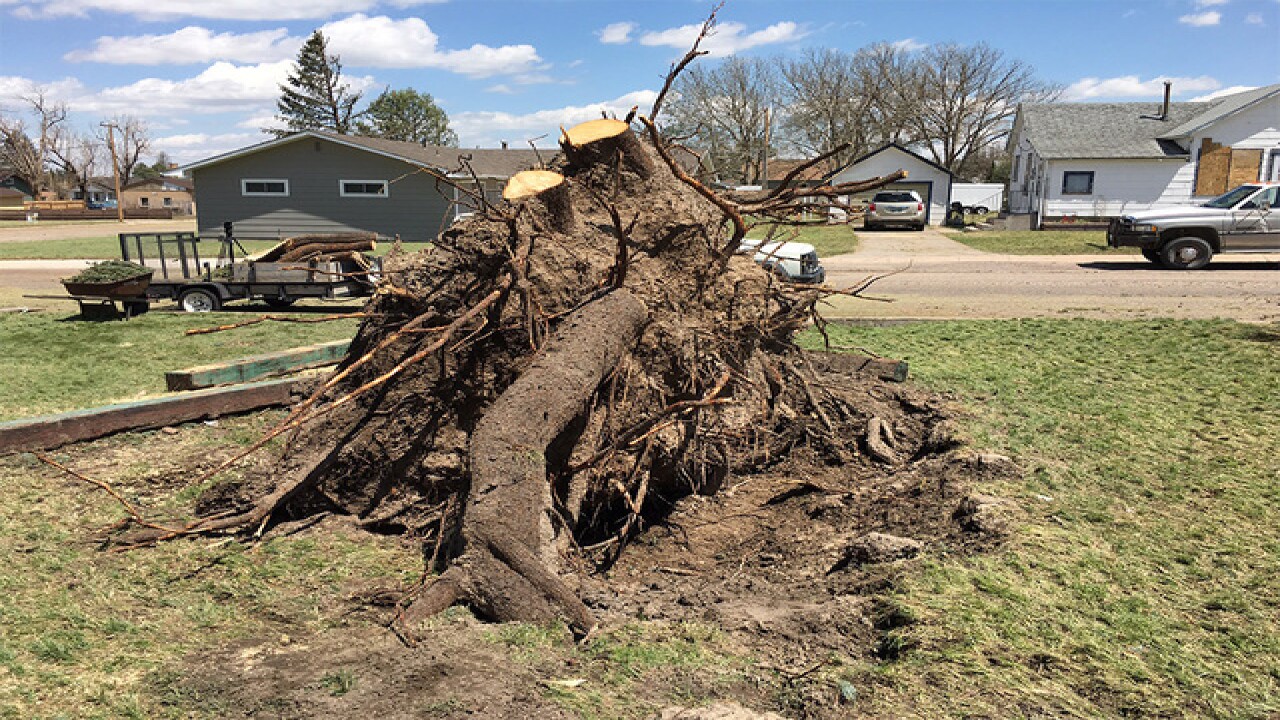 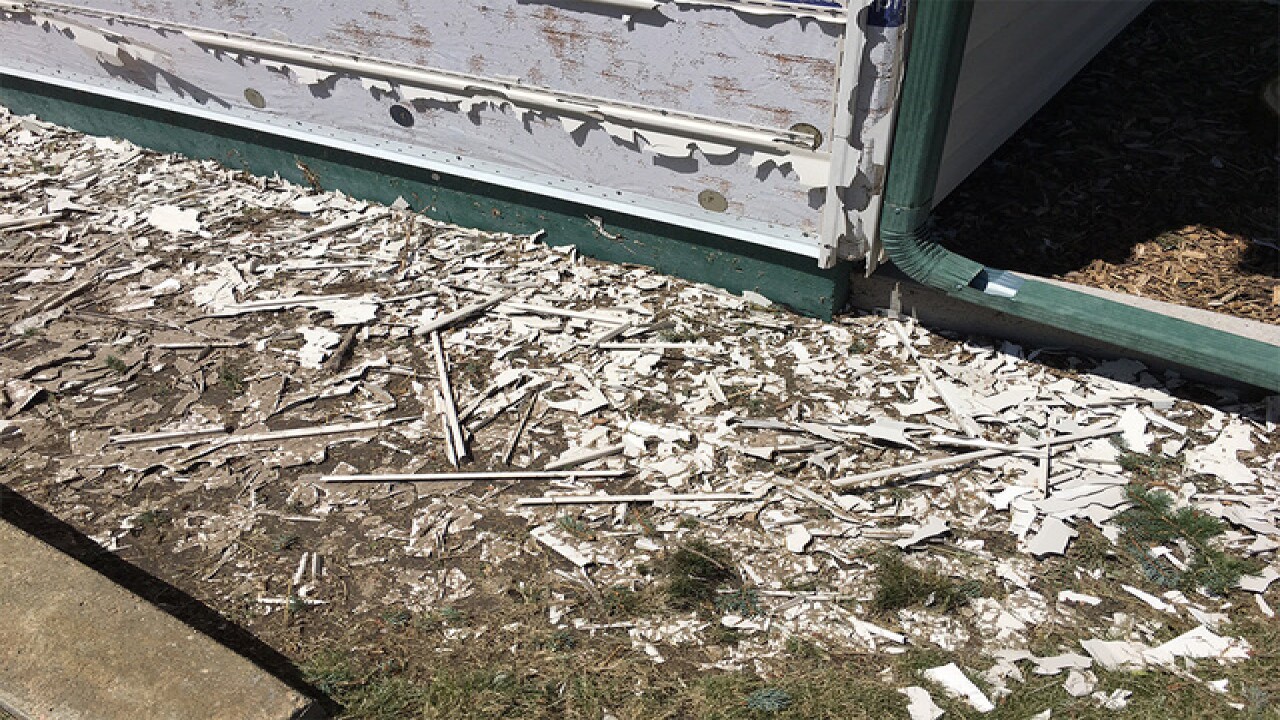 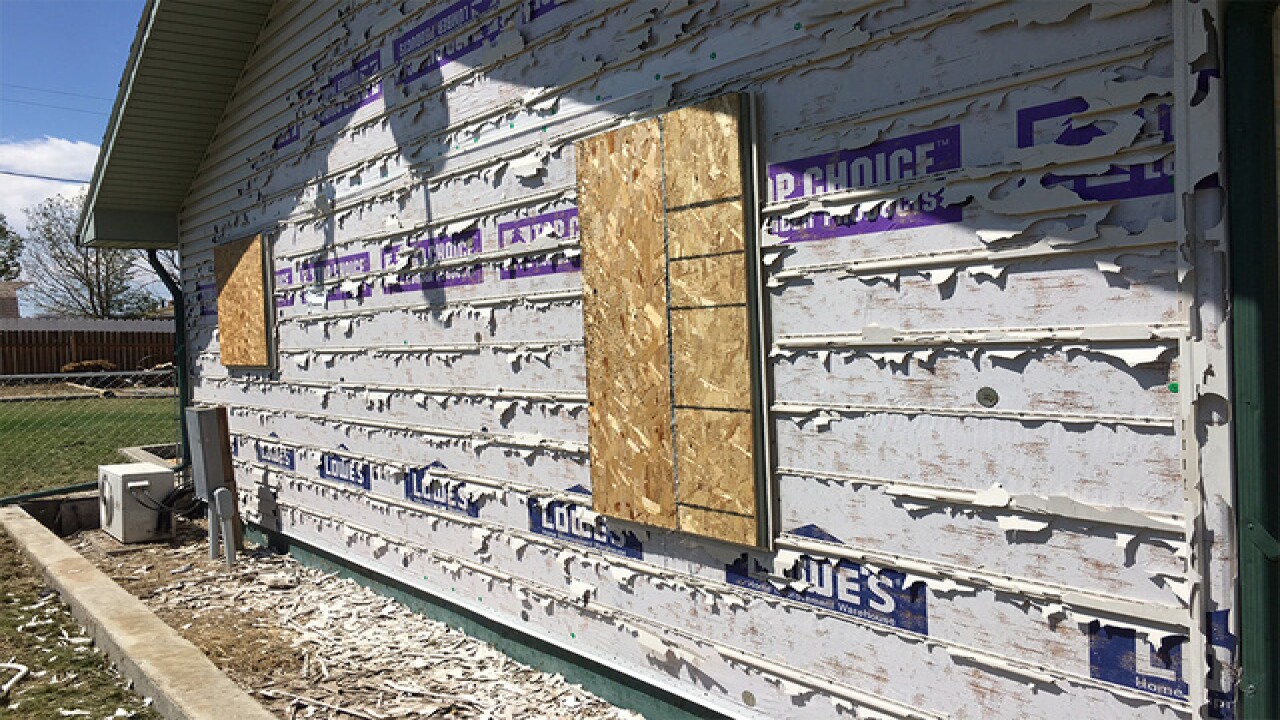 Terry Steege was videotaping the storm when his son ran out to move a pickup truck, in an effort to protect it from the hail. Brandon Steege, 17, no sooner got inside the truck when the heavens let loose.

“I’ve never seen anything like it,” Terry Steege said. “It was like a freight train coming through.”

Brandon Steege told Denver7 that the hail became so fierce, he had to ride out the storm in the truck.

“I saw the glass starting to crack,” he said. “I was getting pretty worried. I considered getting under the dash.”

The hail destroyed the bug deflector on his pickup, dented the hood and roof and put several spider web-like cracks in the windshield.

His neighbor, Dawn Crouse, said hail ended up inside her house because of the high winds.

“This is my kitchen window,” Crouse said, pointing to a boarded up window on the South side of her house. “We have a basement door which is 30 feet away and it was shooting that hail through the window and hitting the basement door.”

Crouse’s husband, Dave, said the high winds, estimated at 80 miles an hour, blew down several trees. He pointed to a large stump in their front yard and said, “It was an old pine tree, about 70 feet tall.”

“Fortunately,” he said, “it fell that way into the street and didn’t hit the power lines.”

The winds removed every leaf and every piece of fruit off Trisha Burry’s Apple tree.

Burry and her son, Cordell, were home when the hail hit.

“It broke through a skylight in the bathroom,” she said. “Water was pouring in. Hail was bouncing around in there.”

Burry said it was so loud, they couldn’t hear each other talk.

“We had to get towels,” Cordell Burry told Denver7. “We couldn’t vacuum it up because there was no power until like 8:30 [p.m.]”

The hail caused minor injuries to Jorge Garcia and his cousin, Alejandro.

The two young men had gone for a run just before the storm hit. About halfway through, the winds kicked up, pelting their faces with stinging dirt and debris.”

“We had to cover part of our faces,” Garcia said.

“We got behind a fence,” Garcia said. “Then the water started rising.”

Garcia told Denver7 that his cousin fell and became submerged when they tried to get away from the rising water. All the while, the hail continued to fall.

“You can normally feel the curves on top of your ears,” he said. “Mine were so swollen, I couldn’t feel them.”

Garcia also pointed to a bruise and scratch on his right arm. He said he suffered that injury when he fell trying to get around the fence, to escape the hail. He also pointed out a bruise on his left shoulder and one on his head behind his ear. He said the bruises would have been much worse had the hail come straight down instead of sideways.

“We were able to take cover behind the fence,” he said. “It helped protect us.”

The golf ball-size hail broke many windows in the Southeast Wyoming community near the Nebraska state line. It also shredded the siding on many homes, leaving parts of town looking like a war zone.

The hail stripped leaves and pine needles off many trees. The park, and many yards, were literally carpeted with pine twigs that had been stripped off the trees.

Maintenance crews used a tractor, with a rotary brush, to remove pine debris from the grass.

National Guardsmen used rakes to remove pine debris from several yards on the west side of town.

Jeanine West, the planning and training coordinator for the Cheyenne/Laramie County Emergency Management Agency, said the National Guard was called out to help residents who couldn’t repair or clean up damage themselves.

“Lowes donated plywood,” she said. “It’s being used to board up broken windows.”

In addition to the National Guard, West said the Red Cross and Salvation Army are in Pine Bluffs to help out.