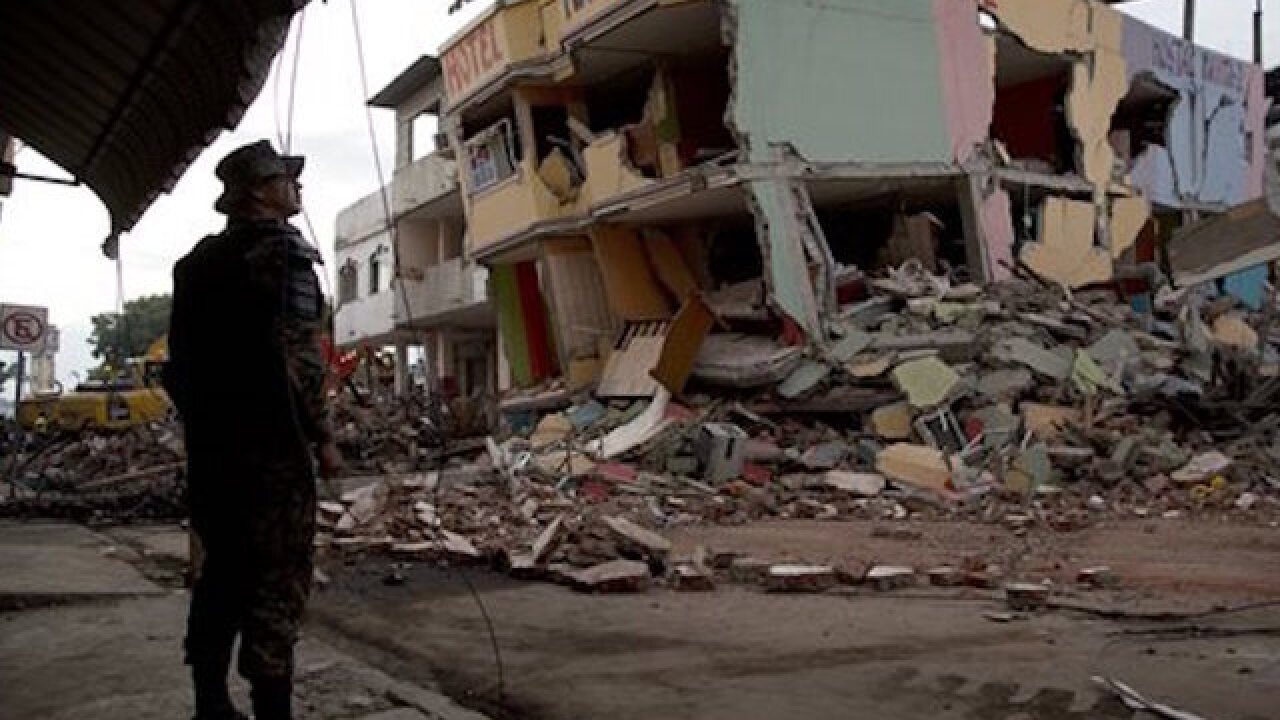 The death count from Ecuador's worst earthquake in a decade rose to at least 646 on Saturday even as the country faced another grim toll: a long and costly reconstruction effort likely to cost billions of dollars.

President Rafael Correa announced Wednesday night that he would raise sales taxes and put a one-time levy on millionaires to help pay for reconstruction.

The damage from the 7.8-magnitude quake adds to already heavy economic hardships being felt in this OPEC nation because of the collapse in world oil prices. Even before the quake, Ecuador was bracing for a bout of austerity, with the International Monetary Fund forecasting the economy would shrink 4.5 percent this year.

In a televised address Wednesday night, Correa warned the nation of a long and costly post-quake recovery and said the economic pain shouldn't fall only on hard-hit communities along the coast.

"I know we're at the most-difficult stage right now but it's just the beginning," he said.

Rescuers continued to comb through the rubble in coastal towns hit hardest by the quake, but the clock was running down for finding survivors. Rescue workers have said a person without serious injuries can survive up to a week buried in debris in the Ecuadorian heat.

On Thursday, Jorge Zambrano, mayor of the community of Manta, announced that three people had been pulled from beneath a collapsed building the night before and vowed to continue searching.

"I still have hope we can find more people who are still alive beneath the rubble," he said. "If we have even a hope of life, we must work with extreme care."

Rescuers also found a more unusual survivor: A flapping white-and-brown duck was pulled from under a pile of rubble, becoming a social media celebrity in a country eager for good news.

Using authority granted by the state of emergency he declared after Saturday night's quake, Correa said sales taxes would increase from 12 percent to 14 percent for the coming year.

People with more than $1 million in assets will be charged a one-time tax of 0.9 percent on their wealth, while workers earning over $1,000 a month will be forced to contribute a day's wages and those earning $5,000 a month the equivalent of five days' pay.

Taxes on companies will also go up, and Correa said he will look to sell certain state assets that he didn't specify. He is also drawing on $600 million in emergency credits from the World Bank and other multilateral lenders.

Unlike the deadly earthquake that ravaged Chile in 2010, when commodity prices were at a high and most of South America was booming, Ecuador must rebuild with prices of oil, the lifeblood of its economy, near a decade low. Manufacturing is also suffering because the economy is dollarized, depriving companies in Ecuador of the same jolt the rest of South America has experienced from devalued currencies.

The tax hikes come as the scale of devastation continues to sink in. A helicopter flyover of the damage zone Wednesday showed entire city blocks in ruins as if they had been bombed.

On Thursday evening, the government raised the death toll to 587. Officials listed 155 people as missing and the number of those made homeless climbed to over 23,500. The final death toll could surpass casualties from earthquakes in Chile and Peru in the past decade.

While humanitarian aid has been pouring in from around the world, distribution is slow. People have had to wait for hours under the tropical sun for aid packages that include water, cans of tuna and diapers. Soldiers keep control with fenced barricades. Some people waiting Thursday in Manta had spent 10 hours in line the previous day only to come away empty handed.

"I've lost my house and I'm living on the street. The same goes for these other women," said Sandra Alvia, 37. "We have no water, no power and nothing to eat. We've lost everything."