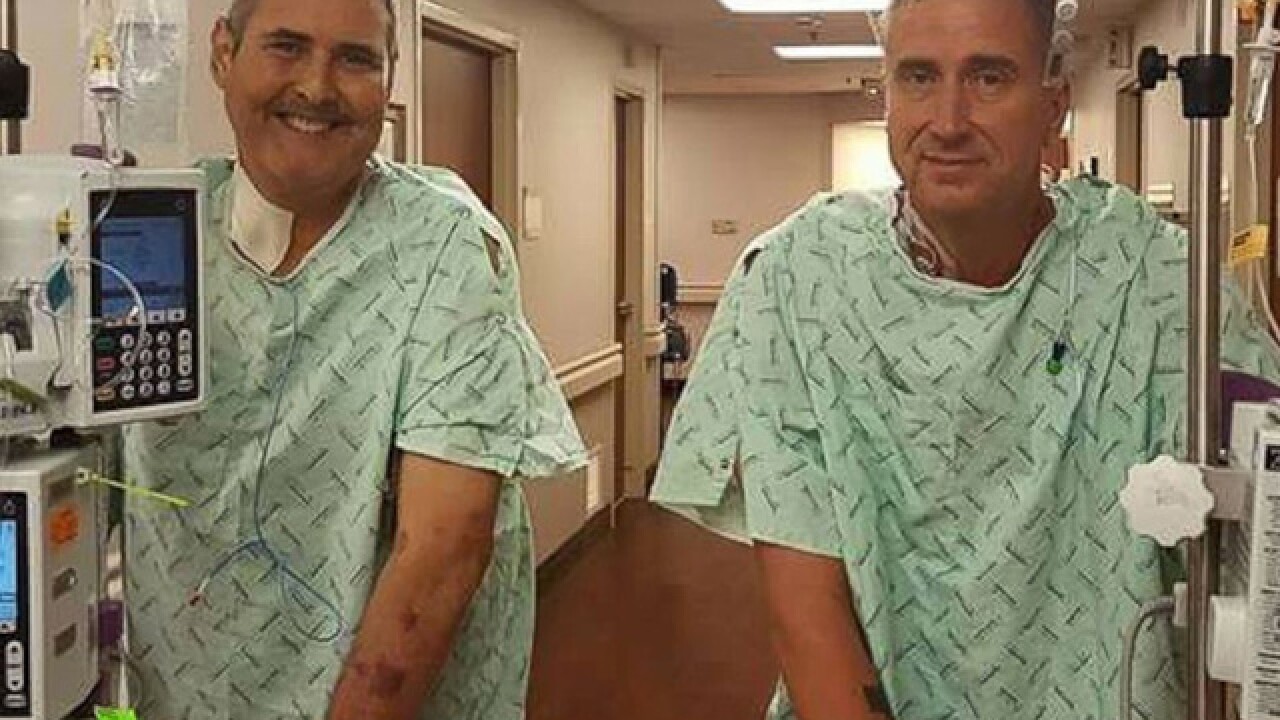 <p>An Iraq War veteran did not hesitate to help a coworker in need when he found out he needed a liver transplant. (Photo/Brian Burkett and Mike Snyder, ABC News) </p>

When Brian Burkett found out he needed a liver transplant, he thought it might take some time to find a donor. But after sending out an email to his coworkers, he found he received a response almost immediately from Mike Snyder.

"He called me within five minutes," Burkett recalled. "You’re just like 'What? Thank you!'"

Burkett had been diagnosed with cirrhosis of the liver years earlier and suffered from chronic fatigue before the operation.

"It was awful," Burkett told ABC News. "Sometimes you’re so tired you can’t sleep. I couldn’t even do simple activities."

Snyder met Burkett seven years earlier while working for AT&T in the Dallas-Fort Worth area. He said when he learned his coworker needed help, he had no doubts about signing up to be a living donor, meaning a portion of his liver would be used to replace Burkett's liver.

"Absolutely we had no doubts, my wife was 100 percent supportive," said Snyder. "They called me in and it was pretty rigorous process"

Doctors found that Snyder was a good candidate for the transplant, but there was one major problem: Snyder had fatty liver disease, and in order to be a possible donor, he needed to lose weight -- a lot of weight.

But Snyder, an army veteran who served two tours in Iraq, didn't even hesitate, immediately falling back on his military training to get back in shape. He worked out for an hour in the morning and an hour at night, and gave up nearly all carbohydrates.

Snyder ended up dropping about 25 pounds in just three weeks.

"It was really not an issue," said Snyder. "I went back to eating right and exercising. I mainly stuck to cardio."

The pair of coworkers underwent transplant surgery last September. Snyder woke up first from his eight-hour donor surgery. "When I woke up I was asking about Brain," said Snyder. "He was in surgery for another two hours after I got out."

Burkett said that after waking up from the transplant he could immediately feel a difference. His chronic fatigue was gone and he felt better than he had in years.

"You wake up and it’s gone. It was amazing how well it felt," said Burkett.

Now, months after the surgery, both men are back at work. But they both say the experience of going through the transplant has made them much closer friends.

"The difference is before we were coworkers and friends, after we have a different kind of connection that honestly is more like family," said Burkett.