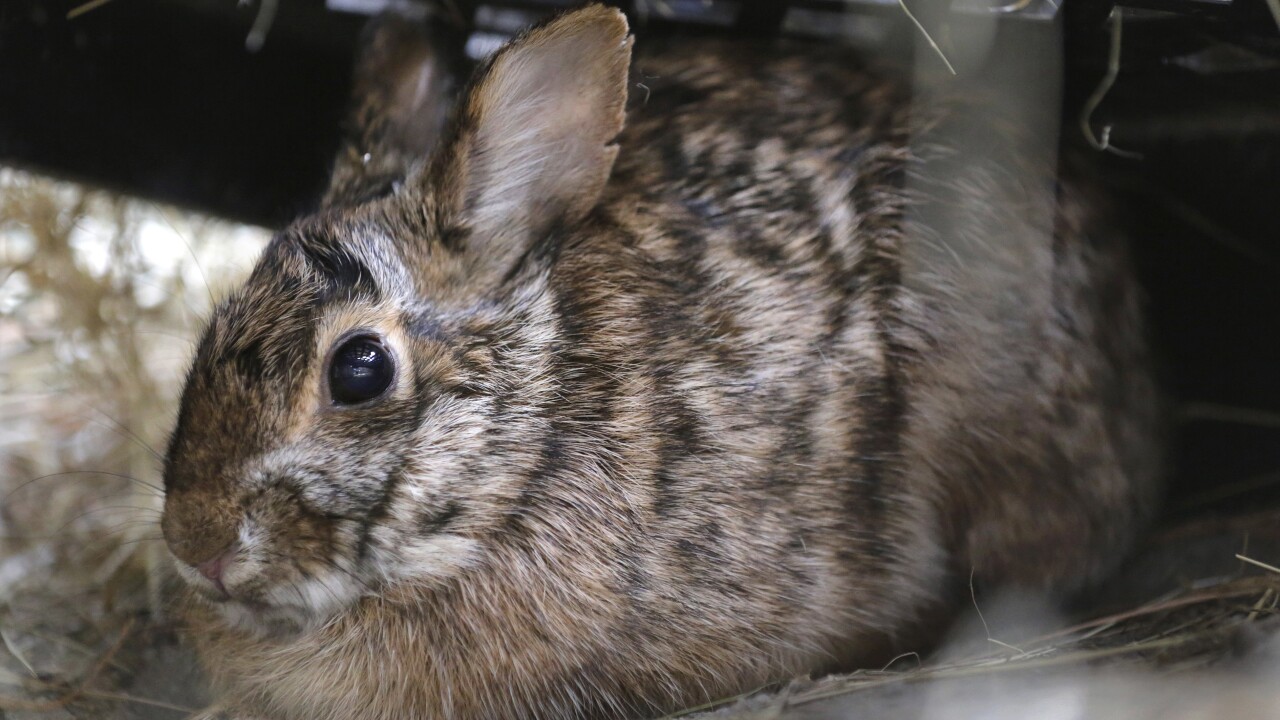 Steven Senne/AP
In this Tuesday, June 21, 2016 photo, a male New England cottontail rabbit sits in a pen at the Roger Williams Park Zoo, in Providence, R.I. In an ambitious restoration project, following 50 years of decline in the population of the species due to reduced habitat, federal and state authorities are raising the rabbits in captivity to release scores of tiny bunnies this summer into areas where thickets and brush have returned. (AP Photo/Steven Senne)

BROOMFIELD, Colo. – A highly contagious and fatal disease that affects rabbits and hares has been detected for the first time in the state of Colorado, park and wildlife officials said Monday.

The disease is considered a foreign animal disease and is of high concern at the state and federal levels. Until recently, officials said, it was not considered a virus that would infect North American cottontails or hares. However, cases have now been reported in New Mexico, Arizona and Texas, according to CPW, prompting efforts to raise awareness of the highly contagious virus in Colorado.

The U.S. Department of Agriculture (USDA) said in a statement it has been looking into how introduction into our state may have occurred, adding that while they haven't pinpointed that yet, the infected rabbits likely came from "our southern neighbors."

CPW said it collected the carcasses of dead wild rabbits for testing in Costilla County on April 13 after receiving a report from someone in the area. Those carcasses were then submitted to the CPW wildlife health and laboratory for necropsy, and testing done by the USDA Foreign Animal Disease Diagnostic Laboratory was reported as positive for RHDV- 2 on April 17.

Officials said recent “unusual mortalities” in Colorado wild rabbits have only been reported in Costilla County to date, but CPW is asking for the public’s help in identifying more rabbit or hare deaths.

“This virus has had significant impacts on domestic rabbits as well as wild rabbits and species that prey upon them in Europe. However, multiple dead or sick rabbits can also be a sign of tularemia or plague, diseases that can cause serious illness in people,” CPW said in its release, advising people to refrain from handling sick or dead wildlife and to prohibit pets from contacting or consuming wildlife carcasses.

CPW stressed RHDV-2 is from a different viral family than coronavirus and is not at all related to COVID-19.

Officials are asking anyone to please report any sick or dead wild rabbits, hares or pika to your local CPW office. They also ask that you do not handle rabbits or rodents that have been found dead, as well as refrain your pets or scavengers to feed on found carcasses.

“Though RHDV-2 is not a risk to pets other than domestic rabbits, a number of other pathogens and parasites from carcasses can affect pets,” CPW said in its release.

They also advise people to not handle or consume rabbits or other game that appear to be sick, and instead report those cases to your local CPW office.

For people with domestic rabbits, CPW has the following guidelines:

A 2016 report from The Center for Food Security & Public Health states the origins of the RHDV are not completely understood but “may have emerged from avirulent caliciviruses that circulate asymptomatically in European rabbits.”

The same report states there is no indication that RHDV infects humans.

While RHDV is harmless to humans, Brian Dreher, CPW's senior terrestial biologist said rabbits and hares serve an important role in ecosystem function and mass deaths of these animals could impact both plant and animal communities.

He said rabbits and hares serve as prey for numerous wildlife species, including golden eagles, coyotes, and lynx, just to name a few. Their die-offs could "impact the survival and reproduction of predators and cause them to seek out alternative prey," Dreher said.