What is the Rocky Mountain Gun Owners group and why are some Republicans taking aim at it? 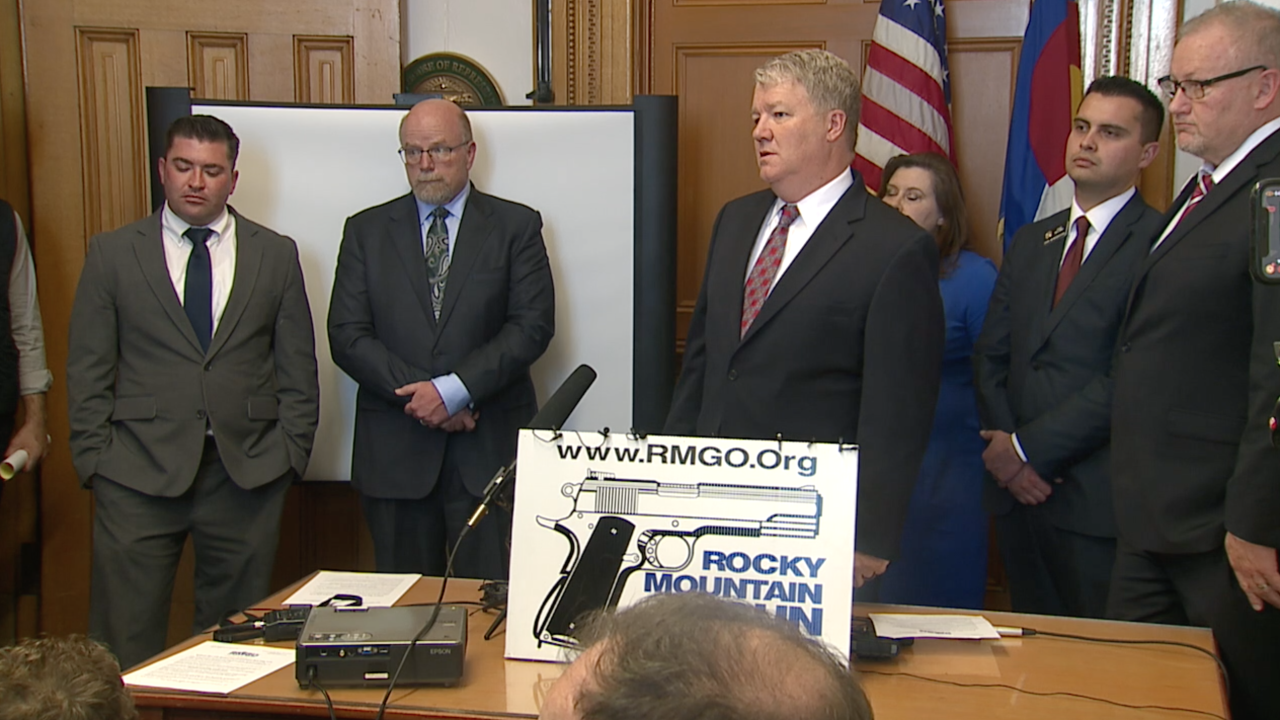 A scathing editorial called out the Rocky Mountain Gun Owners group and its influence over Colorado politics. 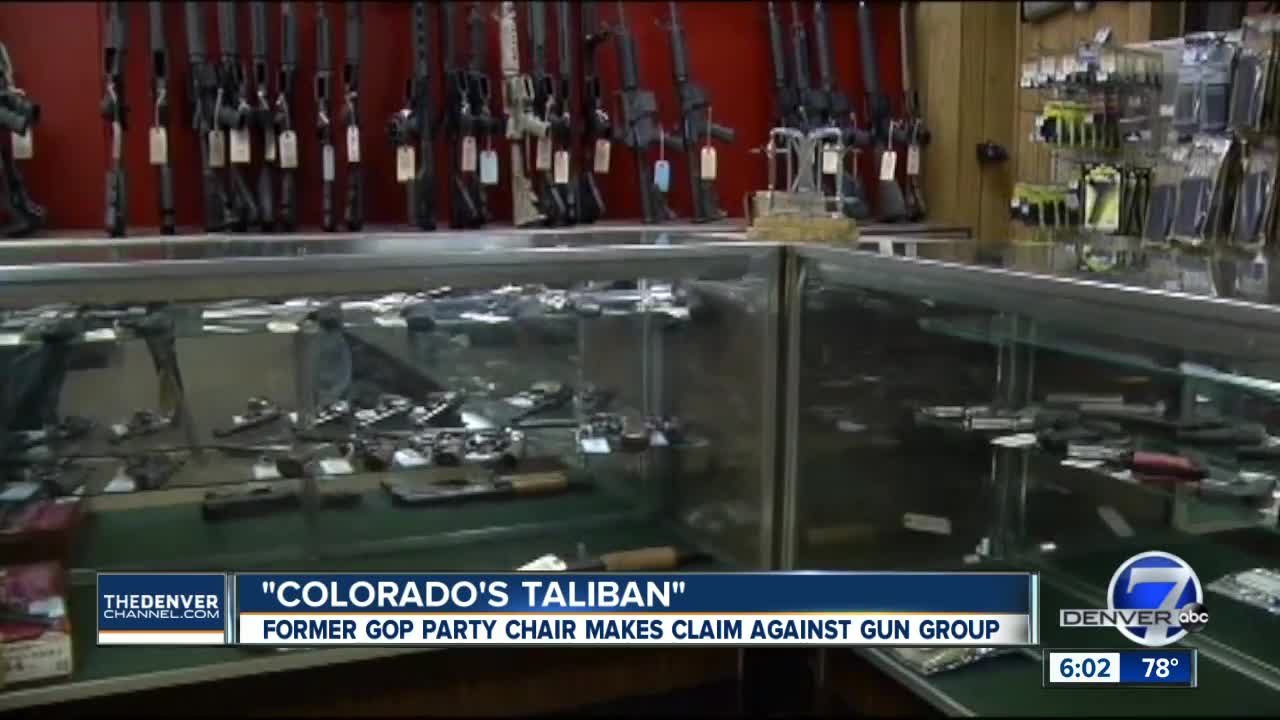 DENVER -- A scathing editorial in the Denver Post over the weekend took aim at the Rocky Mountain Gun Owners group and its influence over Colorado politics.

The editorial was written by Joshua Hosler, the former chairman of the El Paso County GOP. In it, Hosler calls the RMGO, “Colorado’s Taliban,” and said the group uses Chicago-style tactics to punish Republicans who do not fall in lock step with their agenda.

“Anyone who has been around politics in Colorado for at least an election or two knows that RMGO and its leader Dudley Brown have bullied more Republicans than Democrats since its inception as a nonprofit in 1996 that advocates for gun rights,” the editorial read.

Rocky Mountain Gun Owners is a gun rights lobbying group that is behind a lawsuit currently in the Colorado Supreme Court over the state’s ban of high-capacity magazines.

In May, its founder, Dudley Brown, announced a second lawsuit against the state. That lawsuit opposes the state’s newly signed Extreme Risk Protection Order, otherwise known as the red flag law, which would temporarily take the guns away from people deemed to pose a risk to themselves or others.

The group is also behind several recall efforts, including a failed recall against Rep. Tom Sullivan.

A few, high-profile Republicans have spoken out against the group in recent years, including former Rep. Cole Wist.

“I was in denial. Until Yesterday. Last year, state GOP leadership failed to speak up to defend me when RMGO carpet bombed my house district with negative flyers. Now, these same leaders pledge to work with RMGO to take out my successor in a recall. I do not support this effort,” Wist said in a series of Tweets from May. “It is unfortunate but crystal clear. RMGO owns the Colorado Republican Party.”

Wist went on to write an opinion piece that went into more detail about his qualms with the group and its leadership.

Wist was not available for comment Monday about the most recent editorial that calls out the group.

“It has sort of taken over at least the right wing of Colorado politics,” said Colorado Independent Columnist Mike Littwin. “Nobody who is in office is saying a bad word about them. They’re scared. It’s sort of like the NRA on the local level. They’re way to the right of even the NRA.”

Littwin believes the group’s power has grown overtime but that it is causing some in-fighting among Republicans.

“The Republican Party is in trouble in Colorado,” Littwin said. “This party is divided right now and where its future lies is unknown.”

“A lot of Republicans believe that the strategy is not working and it won’t work because it’s dividing a party that’s already losing,” he said.

Former Colorado Congressman Tom Tancredo has also been on the receiving end of RMGO’s backlash in the past when he voted in favor of closing the gun show loophole after the Columbine tragedy.

“I was certainly an ostracized by the organization,” Tancredo said in a phone interview with Denver7.

Tancredo said the group threatened to oppose him and spent money supporting his opponents in various primary races but said that’s just politics.

As for the accusations made by Hosler and others of the group bullying and intimidating people they oppose, Tancreado said that’s also true.

“The midnight mailings,” he said. “Gosh, they’re absolutely known for that.”

However, he believes that Hosler’s editorial went too far.

“Well I certainly don’t think it’s the Taliban, I’ll tell you that,” Tancredo said. “That’s one of the problems is that people have a tendency often to go too far.”

Instead, he said Antifa is a much more likely comparison to the Taliban. Still, Tancredo believes RMGO has problems and that politics in general has gotten uglier over the years.

“The efforts to destroy people, not just to stop them, not just to defeat them at the polls, but to destroy them, I’ve never seen anything like it, it’s horrible,” Tancredo said.

He believes the media has a duty to draw attention to and condemn these type of acts on both sides if Colorado politics is to get any better.

Meanwhile, House Minority Leader Rep. Patrick Neville, who is a supporter of Rocky Mountain Gun Owners sent a statement to Denver7 about the infighting among Republicans saying it’s time for the party to come together.

“Last week, the House Republican Caucus joined together to stand against the calls for a special session to strip tax refunds away from Colorado’s citizens. In doing so, we saved billions of dollars for the taxpayers. Party infighting needs to stop. We achieve great things when we come together to fight for liberty and freedom. The Democrats know we cannot be defeated if we stand together. My Chief of Staff made amends and publicly said so. He has done a great job with this caucus. Unfortunately, we still have some in the GOP who would prefer to divide us. It is unfortunate, but it will not deter us,” Rep. Neville’s statement read.

In the middle of all of this, a recall effort is underway against Governor Jared Polis. However, it appears that there are also tensions between groups trying to oust the governor.

In a news release Monday, The Official Recall Colorado Governor Jared Polis Issue Committee said that it does not believe a petition to recall the Governor will be successful right now due to a lack of finances.

The statement went on to say that other groups are going forward with the petition, which it believes suggests bad intentions.

“ORCGJP believes Dismiss’s premature filing also suggests malicious intent, and though we hope that is not the case, we have evidence suggesting Resist/Dismiss may attempt to hijack our ORCGJP name and logo. We feel we must warn potential signers that ORCGJP will not file a petition until we know we can win and have a well-oiled machine ready to roll,” the statement said.

For its part, Governor Polis’ team is touting his success during this last legislative session but did not talk about the possibility of a recall in its statement to Denver7.

“The Governor is focused on governing for all of Colorado and ensuring that every Coloradan - no matter their zip code or political affiliation - has the opportunity to succeed. During his first six months in office, the Governor has created bipartisan solutions to lower the cost of health care, ensure every kid can go to free full-day kindergarten this fall, and cut taxes for small businesses. The Governor will continue to reach across the aisle and hopes that, by tackling key issues for Coloradans, we will continue to bring people together and focus on what unites us,” spokesperson Conor Cahill said.