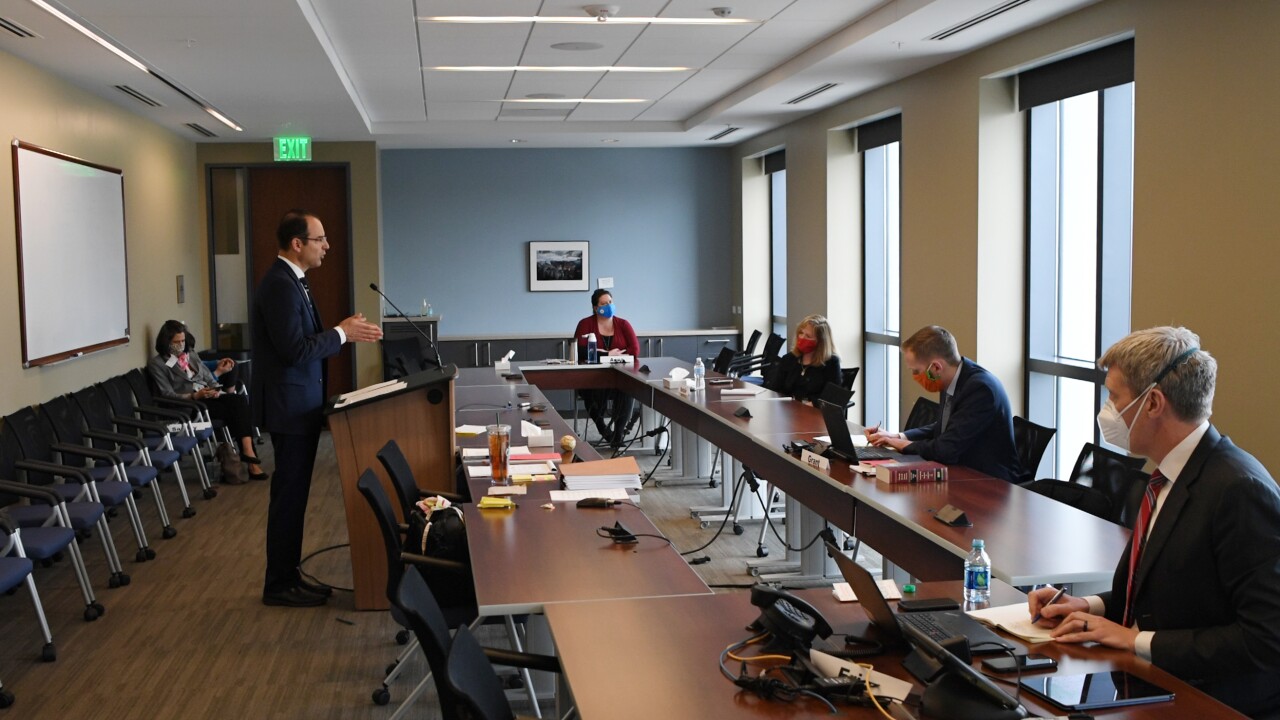 Copyright 2020 Scripps Media, Inc. All rights reserved. This material may not be published, broadcast, rewritten, or redistributed.
RJ Sangosti/DP
DENVER, COLORADO - MAY 13: Colorado Attorney General Phil Weiser speaks during telephonic oral arguments in the Baca faithless electors case on May 13, 2020 in Denver, Colorado. Attorney General Weiser, in a conference room at his offices in Denver, argued to members of the U.S. Supreme Court that Colorado has the right for the state to have laws requiring presidential electors to vote for the person chosen by voters. In the room with Attorney General Weiser from left, his wife Dr. Heidi Wald, son Sammy Weiser, Anna Noschese, Exec. Asst. to AG, Natalie Hanlon Leh, Chief Deputy AG, Grant Sullivan, Asst. Solicitor General, and Eric Olson, Solicitor General. (Photo by RJ Sangosti/The Denver Post) 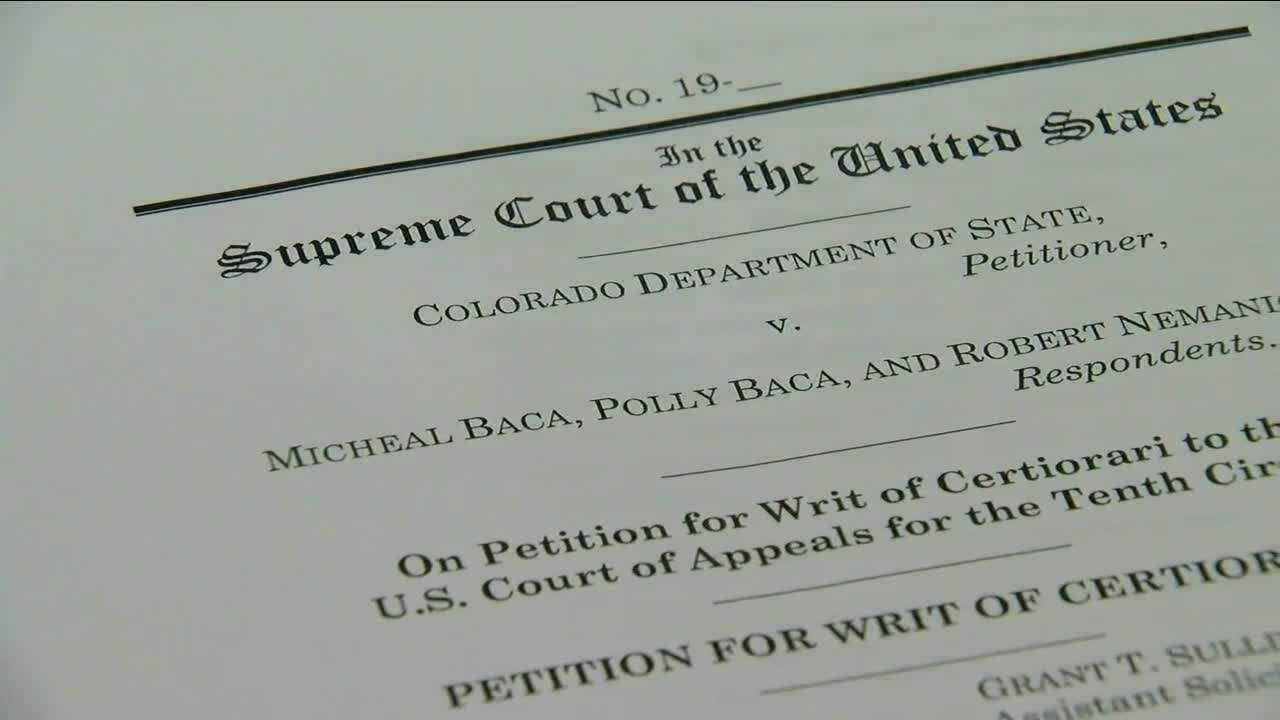 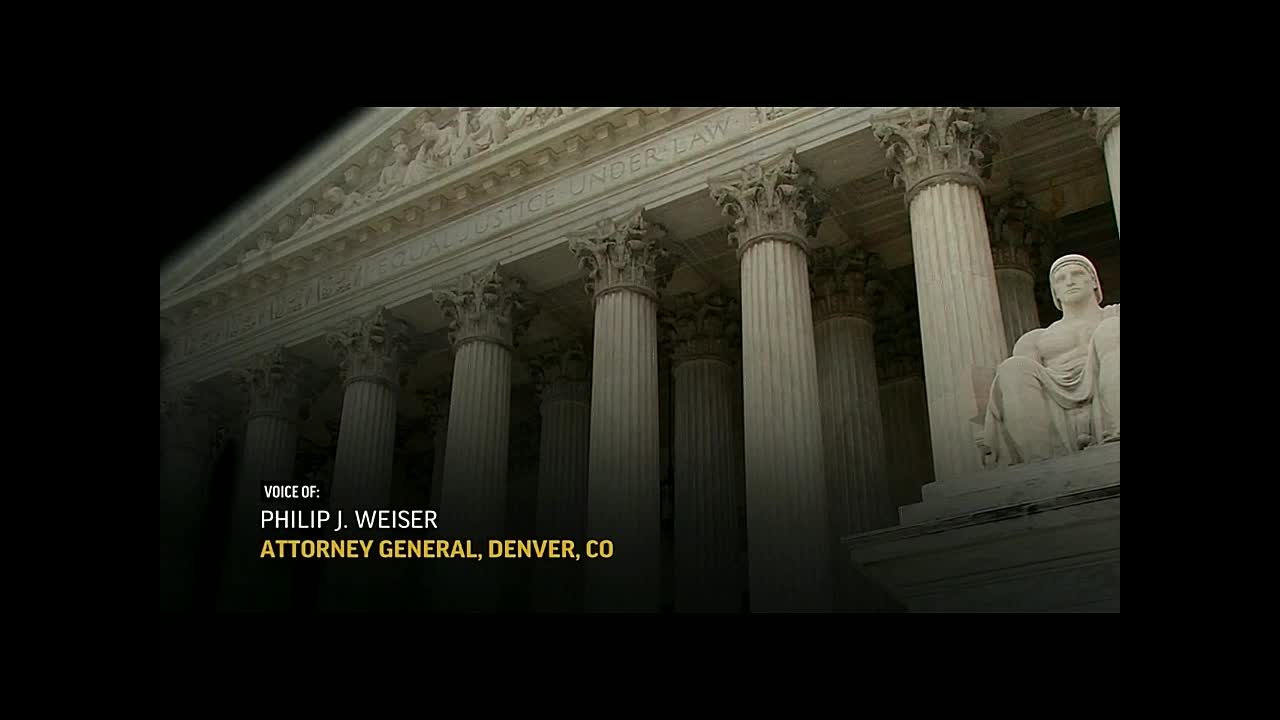 DENVER – The U.S. Supreme Court heard oral arguments from Colorado Attorney General Phil Weiser and attorney Jason Harrow, who represented the “faithless electors,” for an hour Wednesday morning as to whether Electoral College voters may be bound by states to cast their ballots for the winner of the popular vote in the state.

Much of the discussion, which was live-streamed as the cases are being argued remotely because of COVID-19, centered around whether the electors are “free agents” and can vote for anyone qualified to be president or can be bound, as Colorado’s law and laws in 31 other states currently say is the case.

In 2016, three Colorado electors attempted to vote for a candidate who was not Hilary Clinton, who won the presidential popular vote in Colorado that year. Two of the electors eventually relented and cast their ballot for Clinton but a third, Micheal Baca, defied the law, voted for John Kasich, and was promptly removed as an elector and replaced with a person who did vote for Clinton.

During Wednesday’s arguments, Weiser worked to convince the justices that the decision made by the 10th Circuit Court of Appeals, which ruled in the electors’ favor by saying there was no language in the U.S. Constitution that allows a state to remove an elector, was wrong and should be overturned.

Click here for the full transcript from today's arguments in Colorado Department of State v. Baca

Harrow, meanwhile, tried to convince the justices that electors may vote for whomever they want as “free agents” – which drew questions about whether an elector could vote for a giraffe from Chief Justice John Roberts or for Frodo Baggins from Justice Clarence Thomas.

He said he argued alone from his office in Los Angeles and said in an interview he was surprised at Justice Thomas' question.

He told Thomas no, that would be a vote for a non-person. Roberts told Harrow it sounded like he was making a point that there should be no limits on an elector’s discretion in voting, which Harrow responded to by saying that there should not be so long as the elector votes for a person.

Harrow tried to compare electors to members of Congress, saying that once they are put in that position, they are free to vote however they wish. He said the punishment would come at election time if voters were unhappy with that member of Congress’ record, an argument some justices were skeptical of because members can be removed from office without being convicted of a crime.

That point also came up several times throughout the arguments through bribery theoreticals. Harrow argued that an elector should have to be convicted of bribery before they can be removed as an elector, while Weiser argued there was no way that could happen within the court system in the time between the presidential election and when electors cast their ballots.

Weiser argued that if electors are truly “free agents,” they would be prone to being bribed to vote for a certain candidate, which he said would undo the will of the voters of Colorado. Weiser said in a briefing following the arguments that the popular vote pledge was a “prophylaxis against a bribed elector” and that the only person that would bribe an elector would be someone trying to undermine the popular vote – saying that anyone trying to bribe someone to do something they were already going to do is “a chump.”

Harrow closed his arguments by saying that the stakes were high in the decision from the court and that the justices should follow the Constitution for guidance until it is amended.

He told Denver7 he believed that he had the better constitutional argument on Wednesday.

Weiser agreed that the stakes were high – saying the court should “reject this dangerous timebomb and avoid a constitutional crisis” by overturning the 10th Circuit’s decision and said he believed Harrow had failed to offer theories on how to address bribed or faithless electors.

He said afterward that it was an “incredible honor” to argue in front of the high court and that he was feeling good that Colorado would win the case, saying it was, “Everything I hoped for.”

He praised his team and their preparation and said there was little they were unprepared for as Weiser argued from a conference room at his downtown Denver office alongside senior members of his team, his wife and son, a reporter and photographer.

“We were prepared,” he said. “The team did a great job of overturning every possible stone.”

Weiser said he thought comments from Justice Elena Kagan, who said that if there is not clear Constitutional language justices see when considering the ruling that they might rest on the 10th Amendment and states’ rights, could mean that justices might do just that and hand Colorado a victory.

Justice Sonia Sotomayor recused herself from the case because she is friends with one of the original three Colorado “faithless electors.” Weiser said that could risk a 4-4 split decision, which he said would be “a bummer,” but that he hoped the court would rule in Washington’s favor because Colorado’s case “will in effect ride on top of it.”

Weiser said he would be most elated if the court rules 9-0 in favor of Washington in its case and issues a short ruling to follow in Colorado’s case reversing the 10th Circuit decision.

Weiser said he expected a decision from the court by early July. Both parties in both “faithless elector” cases are hoping for quick rulings with the 2020 election quickly approaching.

Colorado Secretary of State Jena Griswold, who has backed the fight against the electors with Weiser, said in a statement she hopes the court rules in Colorado’s favor.

“I am hopeful that today’s oral arguments underscore to the Supreme Court that Americans’ right to self-governance must be protected. American voters must be able to cast a ballot for president this November assured that their voices will be heard and their votes counted,” she said. “Without the ability to enforce state law, presidential electors could willingly disenfranchise millions of American voters or be bribed for their electoral vote. We hope that the Supreme Court will protect American voters, state law, and our elections with its decision.”