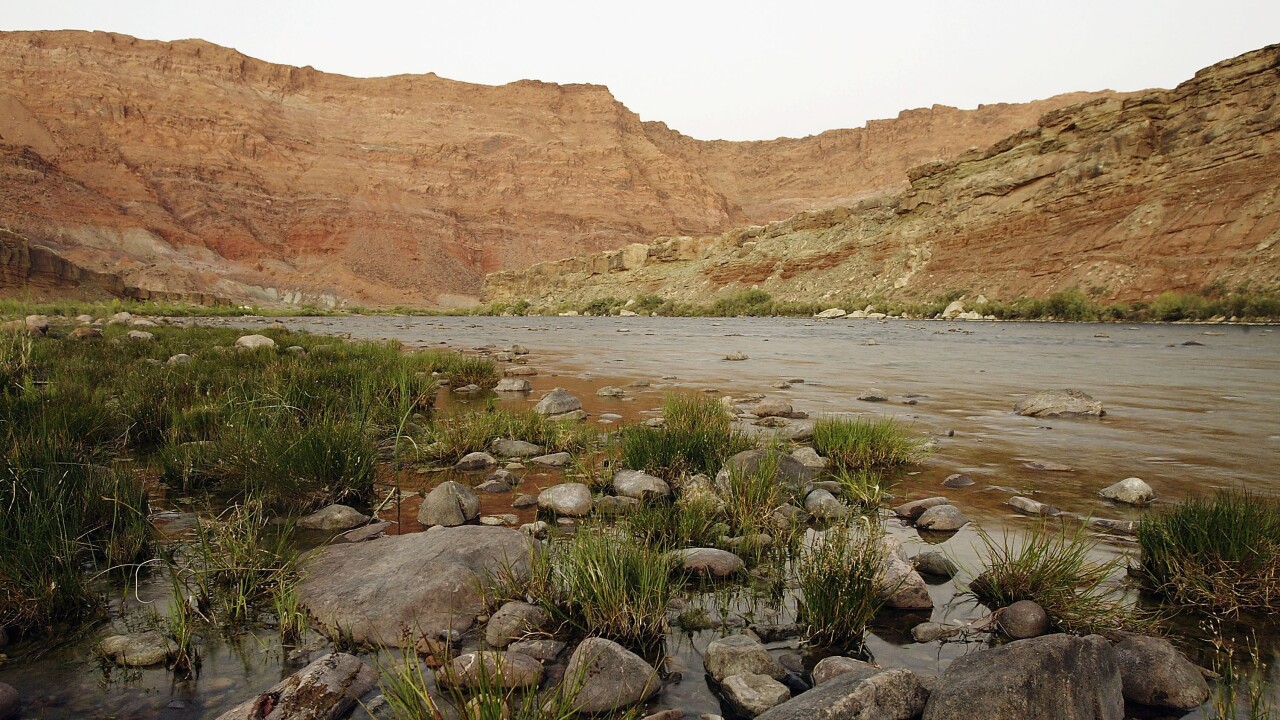 Copyright Getty Images. All Rights Reserved.
David McNew/Getty Images
PAGE, AZ - SEPTEMBER 26: The Colorado River flows though Marble Canyon downstream from Glen Canyon Dam and Lake Powell as the five-year-old Western drought continues on September 26, 2004 southwest of Page, Arizona. Colorado River streamflow records indicate that this is the worst drought in more than 100 years. The seven states sharing the Colorado River are considering a plan to protect the 186-mile-long Lake Powell by cutting the amount of water released downstream to Lake Mead, which is the primary water supply for Las Vegas, Nevada. The drought has left the two massive reservoirs that catch the Colorado River less than half full, exposing long-submerged landscapes to direct sunlight for the first time in decades and officials fear that the levels will fall too low to turn the electric turbines that produce electricity. (Photo by David McNew/Getty Images)

The massive measure combines more than 100 public-lands bills that add more than 350 miles of wild and scenic rivers and 2,600 miles of federal trails. It designates nearly 700,000 acres of new recreation and conservation areas. The bill also withdraws 370,000 acres in Montana and Washington state from mineral development.

The Senate approved the bill, 92-8, sending it to the House.

The bill permanently reauthorizes the federal Land and Water Conservation Fund, which supports conservation and outdoor recreation projects across the country. The program expired last fall after Congress could not agree on language to extend it, and most of Colorado's congressional delegation has been trying to re-authorize it.

“After four years of working on this issue, the Senate was finally able to permanently reauthorize the crown jewel of conservation programs, the Land and Water Conservation Fund,” Sen. Cory Gardner, R-Colo., said in a statement. “I have championed this program throughout my time in the Senate because of how important it is to all Coloradans who love our great outdoors. The program has a direct impact on public lands in Colorado and will be used to protect our state’s natural beauty for future generations. I’m thrilled we were able to finally permanently reauthorize this commonsense program supported by Coloradans across the political spectrum. This is a great day for the future of Colorado’s public lands.”

“Thank you to every Coloradan who has spoken up in support of LWCF, met with me across the state at an LWCF-funded project, and traveled to Washington to advocate for this critical program. It’s your persistence that has led to this historic vote in the Senate to permanently save the conservation fund. After a decade of leading the charge for permanent reauthorization, today is a victory for Colorado and a commitment to future generations," said Sen. Michael Bennet, D-Colo. “It’s rare that a bipartisan lands package moves in Congress, so this bill is a significant accomplishment for communities across Colorado. I am particularly pleased to know my bill with the late Senator John McCain of Arizona, who valued service to this country above all else, is one step closer to becoming law. Our bill takes the best of America—our youth, veterans, and great outdoors—and expands the pathway for one to help the other.”

“Today’s vote is an important win for our national parks and public lands. LWCF has a 50-year history as America’s most successful parks program, and it deserves permanent reauthorization. We hope the House quickly follows in the Senate's footsteps to send the public lands bill to the President's desk," Center for Western Priorities Deputy Director Aaron Weiss said in a statement. “At the same time, it's imperative that members of Congress reach across the aisle to devote full, dedicated funding to safeguard America’s conservation and recreation future. Year after year, Congress has shortchanged LWCF, appropriating less than half of what is collected for recreation and conservation projects across the country. With permanent reauthorization and full, dedicated funding, America's parks will have the certainty they deserve.”