Tuesday is start of petitioning for 2018 election in Colorado 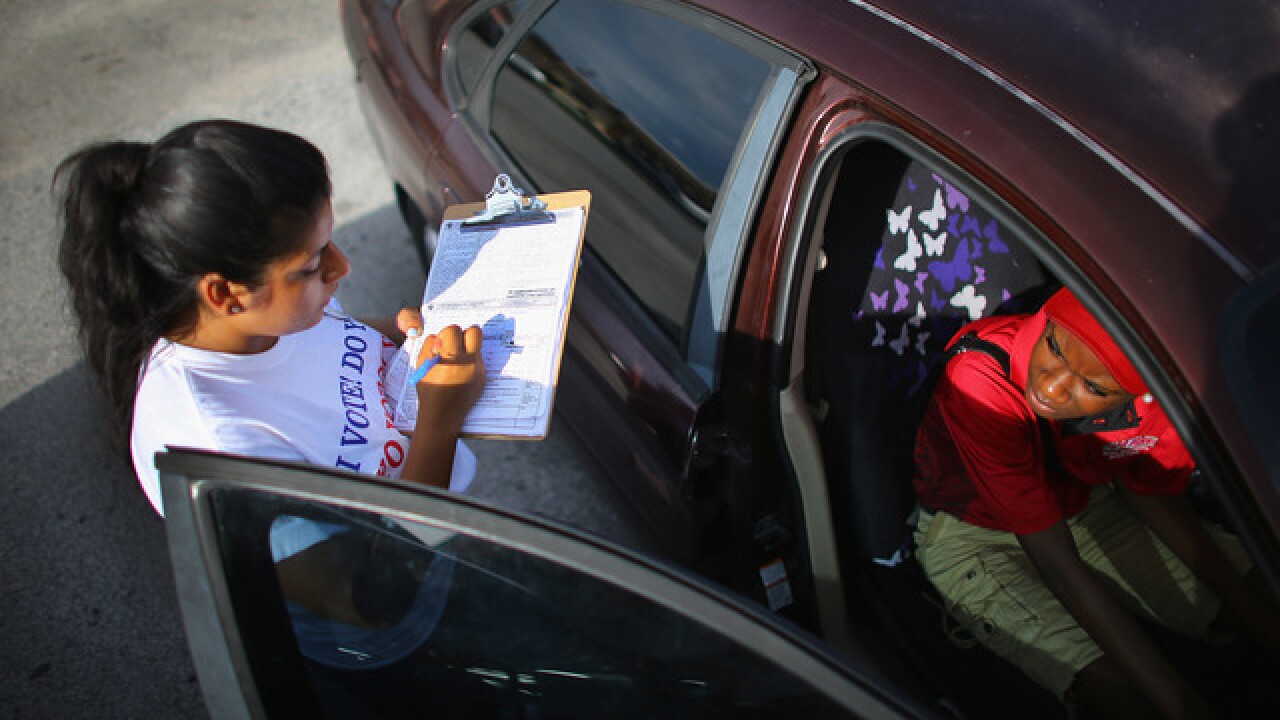 2012 Getty Images
Joe Raedle
<p>POMPANO BEACH, FL - OCTOBER 04: Karen Garcia (L) takes down Ruth Inalien's information as she signs her up to vote during a voter registration drive by members of the Florida Immigrant Coalition on October 4, 2012 in Pompano Beach, Florida. Efforts to get people to register to vote for the upcoming presidential election ends on Tuesday the 9th when the voting rolls close in Florida. (Photo by Joe Raedle/Getty Images)</p>

DENVER – Starting Tuesday, Coloradans can expect to see a lot more people hanging around in places they frequent holding clipboards, asking them about politics.

It marked the first day where candidates from across the state hoping to petition to get onto this year’s ballot can start doing so.

Petitioning is one of two ways prospective candidates for major offices can make the ballot in Colorado. For major offices like governor, candidates need to get 1,500 different signatures from each of the state’s seven congressional districts in two months’ time if they take the petition route.

Candidates can also put themselves at the behest of the low-level caucuses that start in March, where they must get enough votes to move ahead to the state party assembly. There, a candidate must receive 30 percent of the assembly’s vote to make it onto the ballot, with a limit of three candidates.

Candidates who are petitioning could make the ballot by receiving less than the 30 percent at the party assembly if they gather the required number of signatures, though they aren’t eligible for the ballot if they receive less than 10 percent of the vote at the state party assembly.

And with new allowances for unaffiliated voters in the statewide primaries, people signing petitions must be registered with that candidate’s party.

In a crowded 2018 for the governorship, seven candidates have already had their petition formats approved by the Secretary of State’s Office: Democrats Donna Lynne, Michael Johnston, and Jared Polis; and Republicans Victor Mitchell, Doug Robinson, Walker Stapleton and Teri Kear.

Democratic candidate for governor Cary Kennedy is going the caucus route, and has a full team working on outreach.

Polis is so far the only candidate committed to both petitioning and caucusing. He has spent the past several weeks opening new campaign community offices across the state.

There are varying numbers of signatures needed for various offices in Colorado, but all petitions must be returned by 5 p.m. March 20 to be processed. As of Tuesday afternoon, 40 candidates had their petition formats approved.

The end of Tuesday is also the deadline for Q4 campaign finance reports to be submitted for 2018 races and could provide further insight into how the candidates’ fundraising efforts are shaping up as petition and caucus season begins.