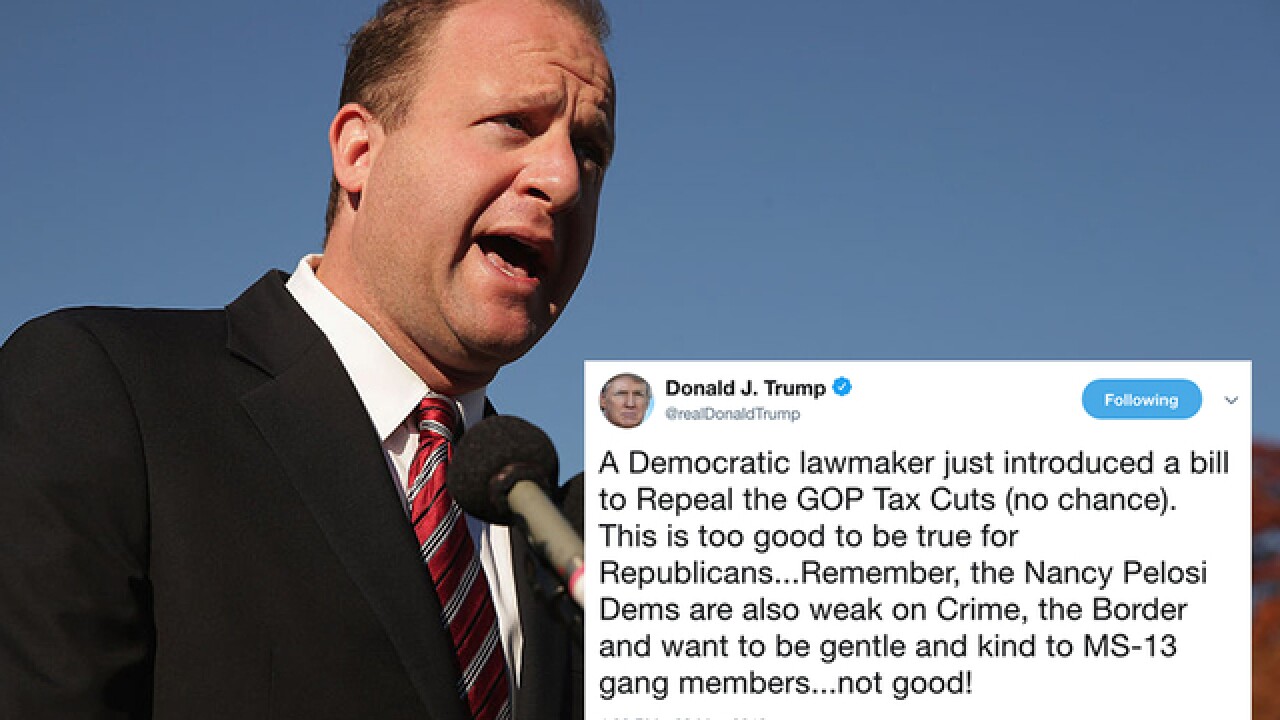 Getty Images // Twitter
<p>President Donald Trump isn’t happy about a measure introduced by Rep. Jared Polis, a Colorado Democrat who is also running for governor, that calls for the repeal of the Trump tax cut and to send that money to student loan borrowers to wipe out student debt. (Photo: Getty Images // Tweet: Twitter)</p>

DENVER – President Donald Trump isn’t happy about a measure introduced by Rep. Jared Polis, a Colorado Democrat who is also running for governor, that calls for the repeal of the Trump tax cut and to send that money to student loan borrowers to wipe out student debt.

“A Democratic lawmaker just introduced a bill to Repeal the GOP Tax Cuts (no chance). This is too good to be true for Republicans...Remember, the Nancy Pelosi Dems are also weak on Crime, the Border and want to be gentle and kind to MS-13 gang members...not good!” Trump tweeted Monday afternoon—the latest in a host of tweets from the president in recent days that have attacked Democrats and the special counsel’s investigation.

Trump was reacting to a bill Polis unveiled last week called the Students Over Special Interests Act, which if passed would repeal the Tax Cuts and Jobs Act—the tax cut measure passed by Republicans last year that the party touted as its biggest accomplishment under the Trump administration.

After the repeal of the tax cut measure, which Polis says contains “$1.9 trillion in corporate and special interest giveaways,” the measure would redirect that money to the approximately 43 million student loan borrowers who combined have about $1.38 trillion in student loan debt.

The rest of the savings, according to Polis, would go toward new investments in Pell Grants for students and to paying down the deficit.

“So many people go to school, get a job, and work hard but still struggle to get ahead because they are weighted down by student loans,” Polis said in a statement last week announcing the measure.

Though most Republicans have hung their hat on what they say is the success of the Tax Cuts and Jobs Act so far in 2018, Democrats have called the measure a giveaway to the rich, and nonpartisan analysis has shown that the measure doesn’t pay for itself as the White House had claimed.

Polis said he introduced the measure after hearing from many college students or graduates in his district who were unable to get out of the debt for years after graduating, including several who defaulted on the loans.

After Trump’s Monday tweet, Polis told Denver7 in a statement that he was proud to have been called out by the president.

“Proud to be THAT Democratic lawmaker referenced in the tweet. Someone needs to stand up for the people – because Donald Trump and the Congressional Republicans are only looking out for lobbyists and special interests, and they raised taxes and health care costs for many families with their scheme,” Polis said in a statement, adding that replacing the tax cut measure would be “something that actually helps.”

Polis is also one of four Democratic candidates for governor running in Colorado this year, and is believed to be among the frontrunners for the party’s nomination. His vocal opposition contrasts with that of Republican frontrunner Walker Stapleton, who touted his support for Trump’s tax cut plan in his latest advertisement. Polis voted against the measure in the House in November.

Primary ballots will be mailed out next week to Colorado voters ahead of the June 26 primary. Tuesday is also the last day for unaffiliated voters to pick a ballot on which to vote in the primary, as they can only vote on one.