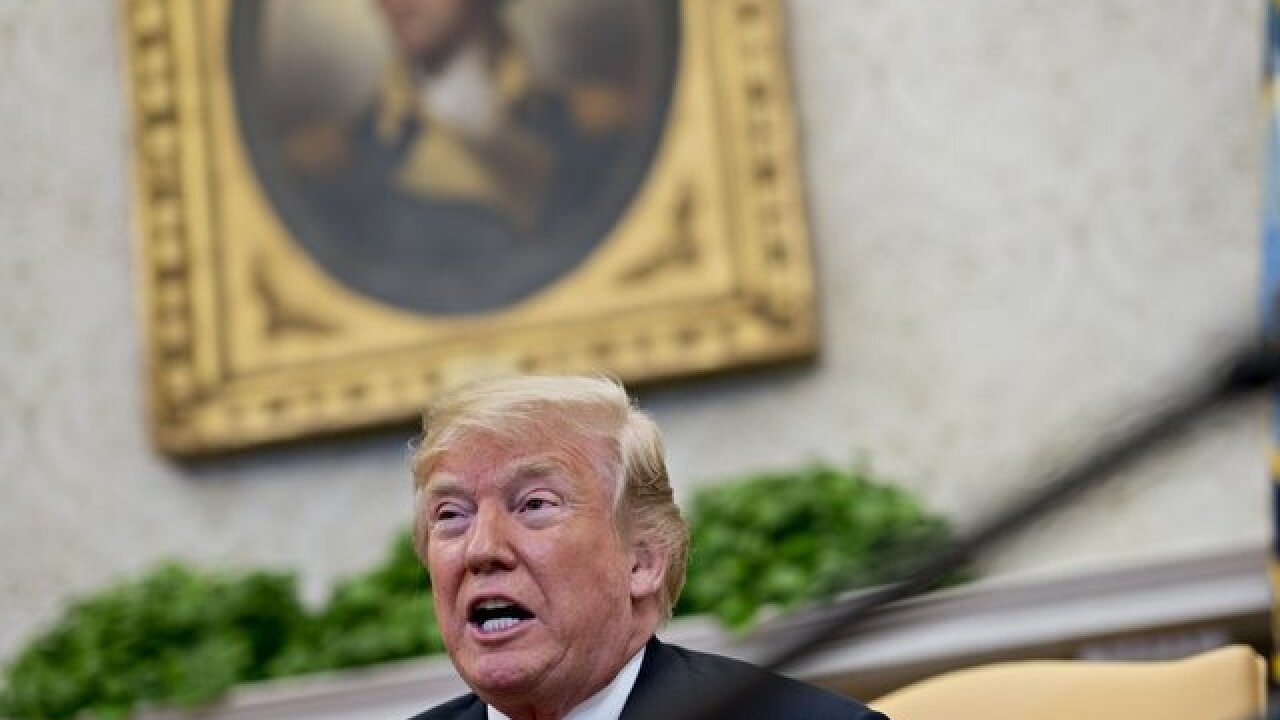 WASHINGTON (AP) — President Donald Trump accused the Justice Department on Friday of trying to frame him by planting a spy in his 2016 campaign — an allegation his own lawyer said might not be true.

Promoting a theory that is circulating in conservative circles, Trump quoted Fox Business anchor David Asman and tweeted: "Apparently the DOJ put a Spy in the Trump Campaign. This has never been done before and by any means necessary, they are out to frame Donald Trump for crimes he didn't commit."

But Trump lawyer Rudy Giuliani cast some doubt on that.

On whether there was an "informant" in the 2016 presidential campaign, Giuliani told CNN: "I don't know for sure, nor does the president, if there really was one," though he said they have long been told there was "some kind of infiltration."

Last week, the National Review raised the question of a possible FBI spy in Trump's campaign. The article cites work by Republican Rep. Devin Nunes, an ardent Trump supporter and head of the House intelligence committee, who has demanded information on an FBI source in the Russia investigation.

The New York Times reported separately this week that at least one government informant met several times with Carter Page and George Papadopoulos, both former foreign policy advisers for Trump's Republican campaign. The newspaper attributed the information to current and former FBI officials.

Also Friday, Giuliani said special counsel Robert Mueller has narrowed his possible interview subject areas from five to two as negotiations continue over whether the president will sit down and answer questions in the Russia investigation.

Mueller is investigating possible coordination between Russia and Trump's 2016 campaign.

Giuliani said Trump's legal team doesn't expect him to be asked about his personal attorney, Michael Cohen, who faces a separate criminal investigation in New York. But Giuliani did not provide many additional details, saying that some questions are still "subject to negotiation."

As the Russia probe moves into its second year, many Trump allies, including some Republicans on Capitol Hill, have increasingly pushed for ways to paint Mueller and his investigators as political actors, not above-the-fray lawmen, in an effort to discredit his findings or justify his possible dismissal.

A number of Trump outside advisers — including former chief strategist Stephen Bannon — have stepped up their attacks on the Department of Justice, calling for it to release more documents to the White House while saying a confidential source has worked against Trump.

Working from his Capitol Hill town house, Bannon has consulted with Trump-friendly congressmen including Nunes and Rep. Mark Meadows, to rally support among Republicans and push Trump to act more aggressively, according to two people familiar with the discussions but not authorized to discuss them privately.

Bannon, who had a falling out with the president last year, often passes his thoughts to the White House via the congressmen or Trump advisers, including former campaign manager Corey Lewandowski and ex-deputy campaign manager, David Bossie, according to the people. He has long pushed for a more antagonistic approach to the probe, dismissing talk from former Trump lawyer Ty Cobb and others who he feels minimized the threat the special counsel posed.

In a series of late night calls to allies, including Meadows and Fox News anchor Sean Hannity, Trump has blasted the reports of an informant as evidence that the so-called deep state of career government officials has been working against him. He has frequently fumed about the Russia probe even while in White House meetings this week about other topics, according to a White House official.

Talk of the reported FBI source has rocketed through the conservative media — Hannity discussed it on his show Wednesday — and was a centerpiece of Giuliani's attacks on the probe Friday.

"I want to know because I believe, if there was an embedded person, that person cleared us because the FBI cleared us. I wonder what the heck is the legitimacy of the Mueller investigation in the first place," Giuliani told CNN.