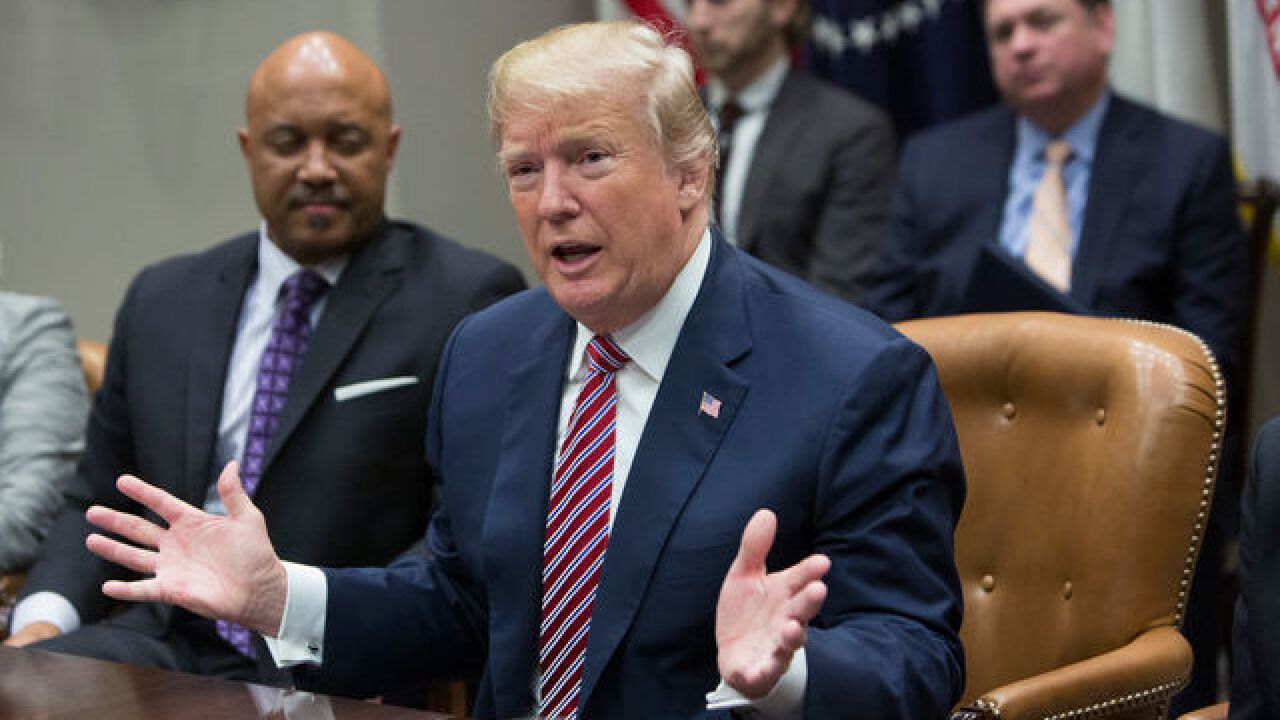 WASHINGTON (AP) — President Donald Trump said Thursday he is considering pulling U.S. Immigration and Customs Enforcement officers from California, warning that the nation's most populous state would turn into a "crime nest" without the federal agents.

Trump said heavily Democratic California, which gave Hillary Clinton a resounding victory in the 2016 presidential race, was "doing a lousy management job." He pointed to "a disgrace, the sanctuary city situation" and lamented the "protection of these horrible criminals."

The president's comments were the latest effort by the Trump administration to pressure "sanctuary cities" to cooperate with federal immigration authorities.

The Justice Department has threatened to deny millions of dollars in federal grant money to communities that refuse to comply with a statute requiring information-sharing with federal law enforcement. It's an essential part of Trump's efforts to crack down on cities and states that refuse to help enforce U.S. immigration laws.

Trump issued the threat during a meeting with state and local officials on school safety and gun violence. He told Attorney General Jeff Sessions and others that his administration has targeted members of the violent MS-13 gang but has been "getting no help from the state of California."

"Frankly, if I wanted to pull our people from California you would have a crime nest like you've never seen in California. All I'd have to do is say is, 'ICE and Border Patrol, let California alone,' you'd be inundated. You would see crime like nobody has ever seen crime in this country."

He added: "If we ever pulled our ICE out, and we ever said, 'Hey, let California alone, let them figure it out for themselves,' in two months they'd be begging for us to come back. They would be begging. And you know what, I'm thinking about doing it."

The White House did not immediately comment on the president's suggestions.

Many cities have been openly defiant in the face of the threats, with lawsuits pending in Chicago, Philadelphia and California over whether the administration has overstepped its authority by seeking to withhold grant money.

The Justice Department has blamed "sanctuary city" policies for crime and gang violence, and criticized jurisdictions that aim the thwart the federal government's immigration enforcement.

In November, Trump called it "disgraceful" that a San Francisco jury found a Mexican man not guilty in the killing of a woman on a city pier, in a case that spotlighted its "sanctuary city" policy.

The defendant, who said the shooting was an accident, had been deported five times and was wanted for a sixth deportation at the time of the incident.

"No wonder the people of our Country are so angry with Illegal Immigration," Trump tweeted after the verdict.

Before the shooting, the man had finished a federal prison sentence for illegal re-entry into the United States and was transferred to San Francisco's jail to face a 20-year-old charge for selling marijuana.

The sheriff's department released him a few days later after prosecutors dropped the marijuana charge, despite a request from federal immigration officials to detain him for deportation.